The Real Aim of Trump’s Trip to Saudi Arabia

Donald Trump sets off on Friday to create the fantasy of an Arab Nato. There will be dictators aplenty to greet him in Riyadh, corrupt autocrats and thugs and torturers and head choppers. There will be at least one zombie president – the comatose, undead Abdelaziz Bouteflika of Algeria who neither speaks nor, apparently, hears any more – and, of course, one totally insane president, Donald Trump. The aim, however, is simple: to prepare the Sunni Muslims of the Middle East for war against the Shia Muslims. With help from Israel, of course. 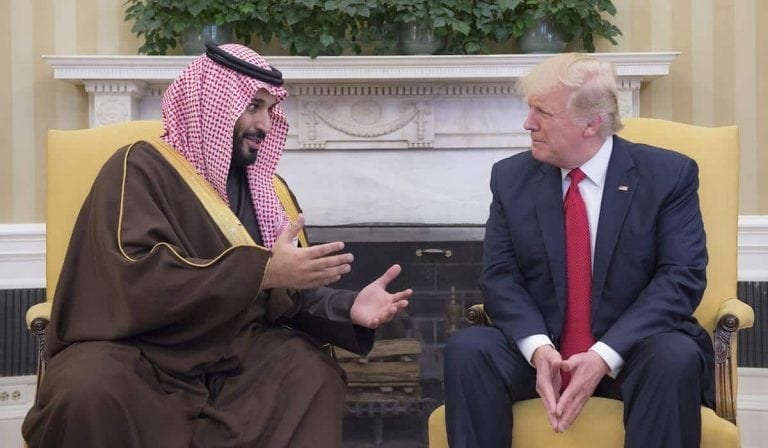 Even for those used to the insanity of Arab leadership – not to mention those Westerners who have still to grasp that the US President is himself completely off his rocker – the Arab-Muslim (Sunni) summit in Saudi Arabia is almost beyond comprehension. From Pakistan and Jordan and Turkey and Egypt and Morocco and 42 other minareted capitals, they are to come so that the effete and ambitious Saudis can lead their Islamic crusade against “terrorism” and Shiism. The fact that most of the Middle East’s “terrorism” – Isis and al-Qaeda, aka the Nusrah Front – have their fountainhead in the very nation to which Trump is travelling, must and will be ignored. Never before in Middle Eastern history has such a “kumidia alakhta” – quite literally “comedy of errors” in Arabic – been staged.

On top of all this, they have to listen to Trump’s ravings on peace and Islamic “extremism”, surely the most preposterous speech to be uttered by a US president since he is going to have to pretend that Iran is extremist – when it is Saudi Arabia’s Wahhabi Isis clones who are destroying Islam’s reputation throughout the world. All this while he is fostering war.

For Saudi Deputy Crown Prince Mohammad bin Salman (henceforth MbS) wants to lead his Sunni tribes – plus Iraq if possible, which is why Shia Prime Minister Abadi has been invited from Baghdad – against the serpent of “terrorist” Shia Iran, the dark (Shia) “terrorist” Alawite regime of Bashar al-Assad, the “terrorist” Shia Lebanese Hezbollah and the aggressive “terrorist” Shia Houthis of Yemen. As for the Gulf states’ own Shia minorities and other recalcitrants, well, off with their heads.

After all, that’s what the Saudis did to the prominent Saudi Shia leader Sheikh Nimr al-Nimr last year: they cut his head from his body, Isis-style, in a classic bit of Wahhabi decapitation, along with 47 other “terrorists”. And any powerful Shias in neighbouring Gulf countries will be cut down, too – which is what happened to Bahrain’s Shia majority when the Saudi army moved in to occupy the island in 2011 at the “request” of its Sunni ruler.

Even for those used to the insanity of Arab leadership – not to mention those Westerners who have still to grasp that the US President is himself completely off his rocker – the Arab-Muslim (Sunni) summit in Saudi Arabia is almost beyond comprehension. From Pakistan and Jordan and Turkey and Egypt and Morocco and 42 other minareted capitals, they are to come so that the effete and ambitious Saudis can lead their Islamic crusade against “terrorism” and Shiism.

And you can see why America’s disgraceful President, a man who truly falls into the regional pantheon of raving loonies – goes along with this. The fact that Isis – Trump’s mortal enemy and the strategic adversary of his defence chiefs – is a creature of the same Salafist cult as Saudi Arabia, is neither here nor there. The Sunni Saudis and the Gulf kings and princes possess immense wealth, the only religion that Trump really respects, and they want to destroy Shia Iran and Syria and the Hezbollah and the Houthis – which is a simple “anti-terrorist” story for the Americans – and this means that Trump can give MbS and his chums $100bn (£77bn) of US missiles, planes, ships and ammo for the war-to-come. America will be happy. And Israel will be happy.

I guess Crown Prince Jared Kushner thinks he can handle this end of the Arab-Nato alliance, though the Israelis themselves will be perfectly happy to watch the Sunnis and Shia fight each other, just as they did during the 1980-88 Iran-Iraq war when the US supported Sunni Saddam – albeit that his army was mostly Shia – and the Israelis furnished US missiles to the Shia Iranians. Already, the Israelis have distinguished themselves by bombing the Syrian army, the Hezbollah and the Iranians in the Syrian war – while leaving Isis untouched and giving medical assistance to al-Qaeda (Nusrah) on Golan.

Much has been made (rightly) of MbS’s threat to ensure that the battle is “in Iran and not in Saudi Arabia”. But, typically, few bothered to listen to Iran’s ferocious reply to the Saudi threat. It came promptly from the Iranian defence minister, Hossein Dehghan. “We warn them [the Saudis] against doing anything ignorant,” he said, “but if they do something ignorant, we will leave nowhere untouched apart from Mecca and Medina.” In other words, it’s time to start building air raid shelters in Riyadh, Jeddah, Dhahran, Aramco headquarters and all those other locations dear to American hearts.

Indeed, it’s difficult not to recall an almost identical Sunni hubris – almost four decades ago – to that of MbS today. The latter boasts of his country’s wealth and his intention to diversify, enrich and broaden its economic base. In 1980, Saddam was determined to do the same. He used Iraq’s oil wealth to cover the country in super-highways, modern technology, state-of-the-art healthcare and hospitals and modern communications. Then he kicked off his “lightning war” with Iran. It impoverished his oil-rich nation, humiliated him in the eyes of his fellow Arabs – who had to cough up the cash for his disastrous eight-year adventure – led to Saddam’s invasion of Kuwait, sanctions and the ultimate Anglo-US invasion of 2003 and, for Saddam, the hangman’s noose.

Yet this leaves out the Syrian dimension. Sharmine Narwani, a former senior associate of St Antony’s College – and an antidote for all those sickened by the mountebank think-tank “experts” of Washington – pointed out this week that US support for Kurdish forces fighting under the dishonest label of “Syrian Democratic Forces” are, by advancing on Raqqa, helping to cut Syria off from Iraq. And that Kurdish forces are now reported as “retaking” Christian or Muslim Arab towns in the Nineveh province of Iraq, which were never Kurdish in the first place. Kurds now regard Qamishleh, and Hassakeh province in Syria as part of “Kurdistan”, although they represent a minority in many of these areas. Thus US support for these Kurdish groups – to the fury of Sultan Erdogan and the few Turkish generals still loyal to him – is helping to both divide Syria and divide Iraq.

This cannot and will not last. Not just because the Kurds are born to be betrayed – and will be betrayed by the Americans even if the present maniac-in-charge is impeached, just as they were betrayed to Saddam in the days of Kissinger – but because Turkey’s importance (with or without its own demented leader) will always outweigh Kurdish claims to statehood. Both are Sunnis, and therefore “safe” allies until one of them – inevitably the Kurds – must be abandoned.

Meanwhile, you can forget justice, civil rights, sickness and death. Cholera has quite a grip on Yemen now, courtesy of the criminal bombing attacks of the Saudis – ably assisted by their American allies long before Trump took over – and scarcely any of the Muslim leaders whom Trump meets in Riyadh do not have torturers at work back home to ensure that some of their citizens wish they had never been born. It will be a relief for the fruitcake president to leave Israel for the Vatican, albeit given only a brief visitation to – and short shrift by – a real peacemaker.

That only leaves one nation out of the loop of this glorious charivari: Russia. But be sure Vladimir Putin comprehends all too well what is going on in Riyadh. He will watch the Arab Nato fall apart. His foreign minister Lavrov understands Syria and Iran better than the feckless Tillerson. And his security officers are deep inside Syria. Besides, if he needs any more intelligence information, he has only to ask Trump.

About the Author
Robert Fisk writes for the Independent, where this column originally appeared.

And you can see why America’s disgraceful President, a man who truly falls into the regional pantheon of raving loonies – goes along with this. The fact that Isis – Trump’s mortal enemy and the strategic adversary of his defence chiefs – is a creature of the same Salafist cult as Saudi Arabia, is neither here nor there. The Sunni Saudis and the Gulf kings and princes possess immense wealth, the only religion that Trump really respects, and they want to destroy Shia Iran and Syria and the Hezbollah and the Houthis – which is a simple “anti-terrorist” story for the Americans