Back in November of 2015, on the 36th anniversary of the storming of the U.S. Embassy and the Iran Hostage Crisis, a mural was unveiled in Tehran.  Titled "The Story of a Flag", the larger than life mural rises above Valiasr Square, and is a constant reminder, to a population of thoroughly thankless Iranians, of the country which claims quasi-legal ownership of the oil beneath Iranian soil.  Of course I'm referring to the U.S.A.  The Exceptional Country which possesses God-given rights to all the oil reserves on earth, as well as whatever else it damn well fancies.  The Exceptional Military is always poised and ready to back up these claims with whatever it takes to get the job done.  Iranians know how this system works as well as anyone.  They have a history of resisting the yoke, ball, chain, & whip, paired with a painful history of getting kicked in the face. 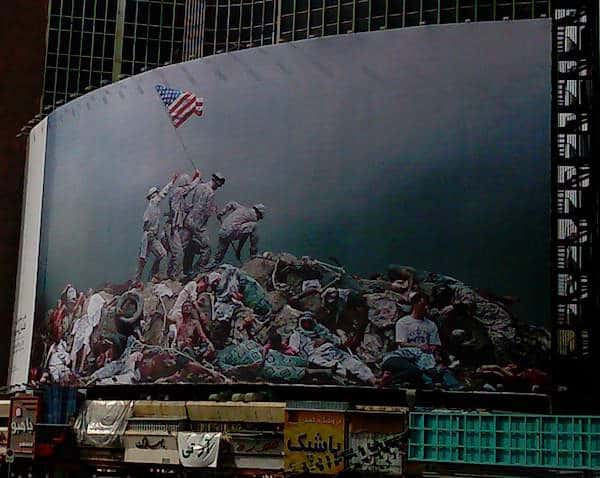 At first glance, the mural, which graces one of Tehran's busiest intersections, appears to be nothing more than a copy of the most iconic military photograph in history.  That is, of course, the five U.S. Marines and a Navy corpsman raising the Stars and Stripes on Mount Suribachi during The Battle of Iwo Jima in World War II.  "Raising the Flag on Iwo Jima" won Joe Rosenthal the Pulitzer Prize for Photography back in 1945, and has inspired generations of Americans to unquestioningly praise their military. (The glorious moment was actually staged, re-enacted for the benefit of the camera.—Eds.)
.

A second glance at the giant mural and it begins to reveal its macabre secrets.  It appears that the conquering military men are poking their flagpole into a heaping pile of war-torn Iranians.  Rotting corpses, skeletal remains, dying, bleeding men wearing keffiyeh, dead, mangled bodies of women and children, all artfully interwoven into a steaming mound of dirt, debris, barbed wire, death, destruction, and mayhem.  Seemingly out of place, in juxtaposition to his surroundings, sits an unconcerned, unscathed man who's wearing what appears to be a Miami Dolphins t-shirt.  An unabashed Banksyesque variation on the theme of the glory of war, created for the amusement and amazement of all Iranians and those of us who question the basic goodness and altruistic motives of the U.S. Military-Industrial Complex.
.

To understand the mural from an Iranian perspective,  you'd need to spend three or four lifetimes studying its 6000 or so years of continuous inhabitation.  Since that's out of the question, let's go back to the middle of the last century, when the world was just starting to recover from the carnage of the planet-sized barroom brawl known as World War II.  Along about 1951, Prime Minister Mohammed Mosaddeq managed to nationalize the oil industry, wrestling control away from the British.  This was a two-pronged assault upon everything held to be Holy by the burgeoning U.S. Empire and its client European states.  Not only was Iran using its natural resources for the common good (socialism), it was taking control of the most sacred substance on earth (oil).  What was Mosaddeq thinking?  There's a hero and a fool born every minute; often in the same body. 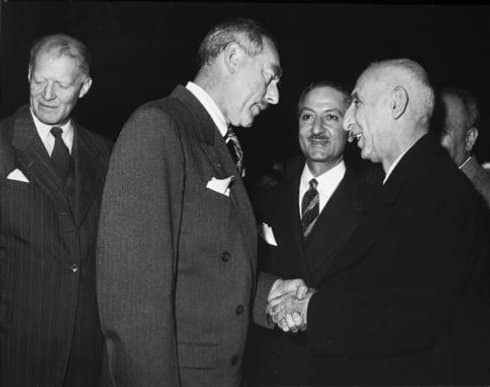 Iran premier M. Mossadegh greeted by Dean Acheson at Union Station, DC, circa 1951. The man-—judged to be a nuisance by the Anglo-American oil mafia—was soon deposed in a CIA coup led by Kermit Roosevelt.

By 1953, the sneaky, skulking arm of the U.S. Military (the C.I.A.) pulled off a covert coup d'etat, ousting  Mosaddeq, replacing him with Shah Mohammad Reza Pahlavi (the infamous Shah of Iran).  This put control of Iran's oil squarely back into the hands of U.S. and British oil interests.  The Shah opened Iran's doors to the U.S. Military, which used and abused it for the next 25 years of the Cold War.  Then in 1979, the Iranian Revolution returned control of their country to the Iranians.  An Islamic Republic was formed under the leadership of Ayatollah Khomeini.  The people danced in the streets, and stormed the U.S. Embassy, marking the start of the Iran Hostage Crisis. 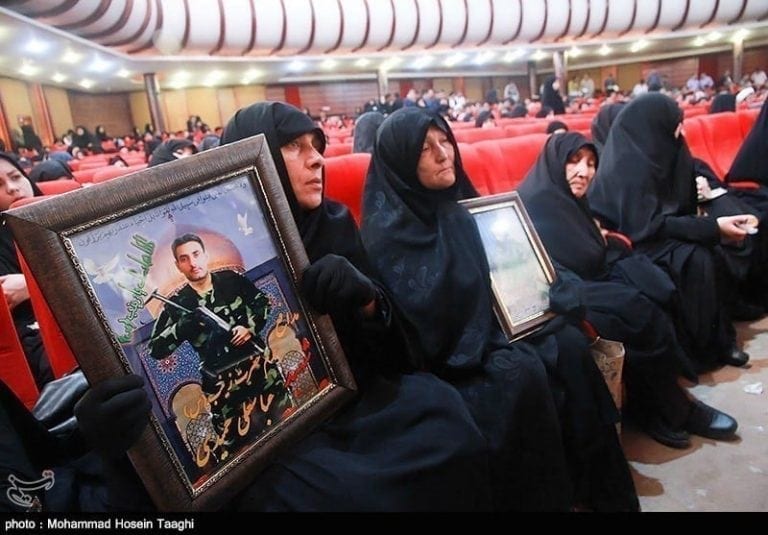 Iranian mothers commemorating the sacrifices of their sons. Iran is heroic, near incomprehensible to Westerners, and indomitable. Thanks to US-initiated intrigues and wars, Iran has many martyrs. But Iran cannot be bullied.

The hostage situation only lasted 444 days, but the Islamic Republic prevails to this day.  Populism and socialism have returned, industry is nationalized, and many Western influences are banned.  But it's been a bumpy road for those who refuse to do the bidding of Empire.  Case in point; the 8 year long Iran-Iraq War.  Islam condemns violence, and Iran's military had been largely disbanded under the new regime.  With Empire's blessings, weapons, and advice, Saddam Hussein made a power grab, attacking his neighbor.  What followed was a protracted, bloody conflict in which both sides were heavily armed and encouraged by the U.S.A. and Israel.  Weaponry used included, but was certainly not limited to chemical weapons (used exclusively by Iraq).  Empire sat on the sidelines, cheering for and placing bets on Iraq.  But in the end Iran prevailed, buried about a million bodies, and returned to life as usual. 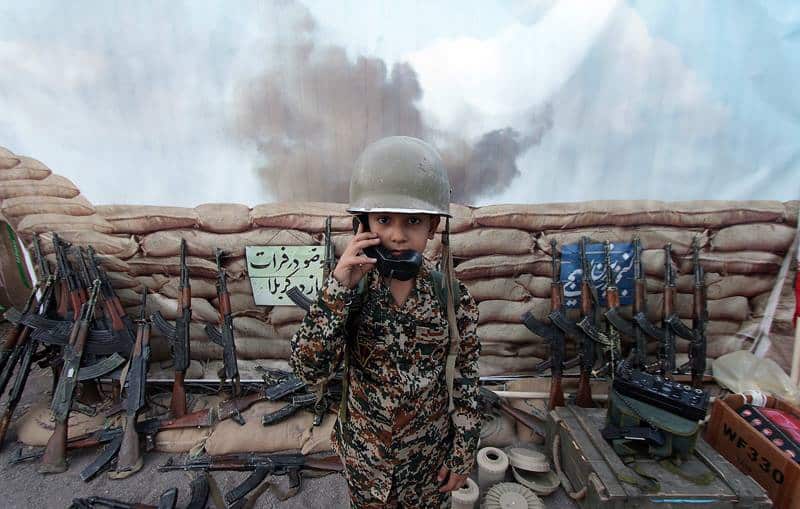 The US has immersed Iran into a culture of constant alert against the proliferating regional conflicts and threats. The population is psychologically prepared to resist, and even children play in amusement parks simulating combat zones. The menace of devastating war fills the air.

A festering thorn in the paw of Empire, Iran has been subjected to non-stop economic punishment from all sides.  Constantly and falsely accused of developing nuclear weaponry, saddled with crippling economic sanctions and frozen assets by Empire, the European Union, and the United Nations, the land once known as Persia has prevailed, grown, and even prospered.  American politicians break nervous sweat at the mere mention of Iran.  U.S. "newscasters" snarl when reporting the latest "news" from the region.  Israeli trigger-fingers itch to launch missiles.  Vladimir Putin smiles his little smile, and tells Iranians not to worry.  He has their backs.

.
"Raising the Flag on Iwo Jima" is perhaps the most reproduced and recognizable photograph in history, but it contains a hidden story.  Like war itself, the picture is a scam, a fake, not what it appears to be.  Truth is always the first casualty of war.  The shot was set up.  Nothing more than a photo-op.  The bullets were flying as photographer Louis Lowery photographed the raising of the flag on Mount Suribachi, only to be blown off the summit by a Japanese grenade.  About that time, Secretary of the Navy, James Forrestal arrived on the scene, deciding he needed the flag as a war trophy.  So he wouldn't have to be content with just a few souvenir Japanese scalps, a second group of uniformed cannon fodder was sent up the mountain with a fresh flag and a new photographer.  The resulting photograph rewrote the history of the Battle of Iwo Jima.  The first flag was forgotten.  It's unclear whether 3 of the 6 men who raised the second flag for the lens of Joe Rosenthal were killed in the process of carrying out the flag-raising mission and switcheroo.  Apparently James Forrestal got his flag, and later had an aircraft carrier named after himself.
.
Apologies are in order for the quality of the photo of "The Story of a Flag".  I lifted it off the internet, and have no idea who shot it.  I'm pretty sure I could do better, but don't have the budget to pop for a trip to Tehran.  I should also apologize for not giving credit to the artist who created the mural.  All the articles I could find on the subject only condemned the work as an anti-American piece of shit.  Damned, godless, ungrateful Iranians.  They should be thankful that their country hasn't yet been completely reduced to a pile of rubble like Iraq, Afghanistan, Libya, Syria, Vietnam, Cambodia, Laos, North Korea... and the list does go on.  Iran has been in the crosshairs of a locked and loaded Empire for a very long time, and somehow always manages to dodge the final bullet.
.
For the cheering fans in the peanut gallery of Empire, Iran represents an exhausting and frustrating challenge.  Given the chance to become part of the world capitalist economy, it balks, choosing instead to operate under a socialist framework of peace and sharing.  Boasting an unparalleled system of socialized medicine and free public education.   Defeating its foes again and again by turning the other cheek and refusing to be goaded into violent conflict.  Placing flowers into the barrels of guns.  Mocking American Military mayhem with murals which speak truth to power.  Empires come and go.  True civilizations may last a very long time.  Six thousand and counting for Iran.  I'm betting on seven thousand.
About the Author 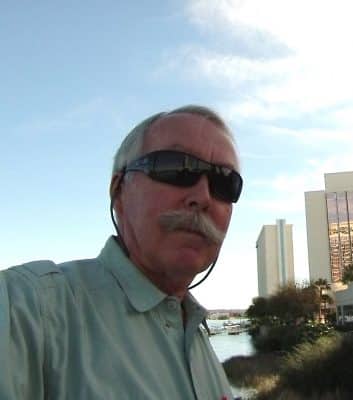 To understand the mural from an Iranian perspective,  you’d need to spend three or four lifetimes studying its 6000 or so years of continuous inhabitation.  Since that’s out of the question, let’s go back to the middle of the last century, when the world was just starting to recover from the carnage of the planet-sized barroom brawl known as World War II.  Along about 1951, Prime Minister Mohammed Mosaddeq managed to nationalize the oil industry, wrestling control away from the British.  This was a two-pronged assault upon everything held to be Holy by the burgeoning U.S. Empire and its client European states.  Not only was Iran using its natural resources for the common good (socialism), it was taking control of the most sacred substance on earth (oil).  What was Mosaddeq thinking?  There’s a hero and a fool born every minute; often in the same body.

The Saker: Trump: dancing with wolves on the Titanic

What a phenomenal and inspiring piece of journalism!

John deserves a Pulitzer Prize for his writing.