Home AMERICAN BRAINWASH Russia’s Calm, But Firm, Response to the US Shooting Down a Syrian Fighter Jet

Russia’s Calm, But Firm, Response to the US Shooting Down a Syrian Fighter Jet

by GARY LEUPP
Crossposted with Counterpunch 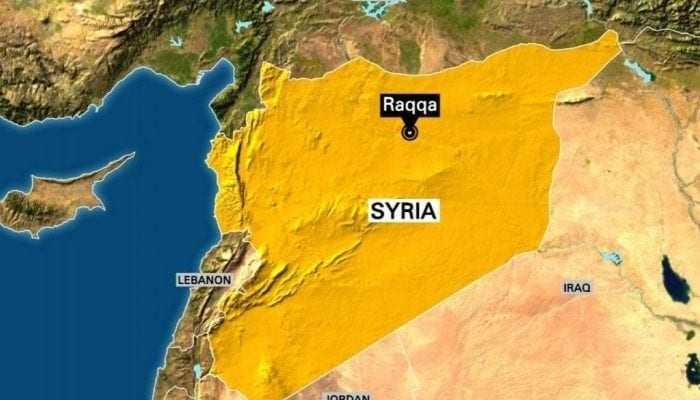 Approximate area where Syrian SU-22 was shot down by US warplanes.

The Syrian government says its plane was bombing ISIL forces. (This could be perceived as an unequivocally good act, ISIL being what it is.) But the U.S. says the plane was bombing its proxies, who are themselves battling ISIL around Raqqa with embedded U.S. advisors. These proxies are mainly Kurds who want independence and other forces allied to the U.S. and its Arab allies in a common effort to ultimately topple the Assad government. And everyone paying attention knows these proxies include forces closely aligned with what used to be called al-Nusra. Forces the U.S. considers friends are considered by Damascus terrorists.

There are differences of opinion on this matter between the government of the aggressor imperialist country and the government of the country being assaulted by a host of foreign forces, and in the cross-hairs of this—what did Martin Luther King call it, so rudely, in 1967?—“greatest purveyor of violence in the world”?

In any case, Assad’s is an internationally recognized government, as legitimate as the Trump government, and the U.S. and its allies are plainly violating Syrian sovereignty by their presence. The Russian position is that the Syrian Arab Army (the national army) is the guarantor of Syrian unity and sovereignty, and the alternative is an Islamist government that would destroy Palmyra, blow up the churches of Damascus, behead children etc.  (This is a rational position.) 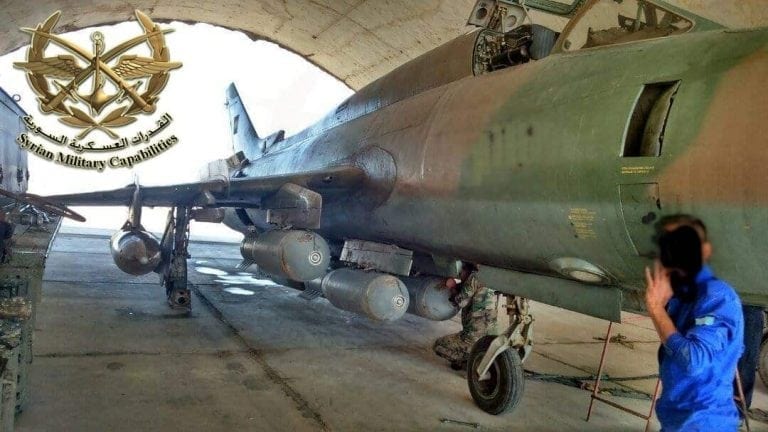 A battered Syrian Air Force SU-22 being maintained. After years of war against powerfully armed enemies, and lately even the advanced forces of the Anglo-Zionist empire,  it's a miracle these planes are still flying.

ISIL (ISIS, the Islamic State) exists because a Jordanian Bedouin guy named Abu Musab al-Zarqawi organized an international jihadi group around Herat, Afghanistan circa 2000. Called Jama’at al-Tawhid wal-Jihad (Organization of Monotheism and Jihad), it was a rival of Osama bin Laden’s al-Qaeda, whose camps were located on the other side of Afghanistan. After the U.S. invasion of Afghanistan, Zarqawi relocated to Iraq. The U.S. invasion of Iraq (which recall was based entirely on lies, and produced horrible ongoing destruction and suffering) provided optimal opportunities for jihadis like him. In 2004 he pledged allegiance to al-Qaeda and established, as its Iraqi franchise, Tanzim Qaidat al-Jihad fi Bilad al-Rafidayn (commonly rendered al-Qaeda in Iraq).

That morphed into ISIL. It spread from Iraq to Syria, and back to Iraq, even as al-Qaeda continues to challenge it for influence and territory. It is a hideous product of U.S. imperialist interventions. In Syria it challenges a government that, however oppressive and corrupt,  would surely be seen as the better alternative by most rational people. But the dominant view in the State Department has been that Assad needs to go. The debate has been over how to effect his ouster, through overt or covert means, and the main practical problem the lack of reliable allies willing to work with U.S. trainers and not defect to the other side after their training.

So on the one hand the U.S. pursues openly an anti-ISIL campaign in Syria (and Iraq), claiming plausibly that the sheer evil of ISIL justifies the drive to destroy it. Who could complain? (The Syrian government points out that any uninvited military presence is a violation of international law.) On the other hand the ultimate intent, which seems unchanged under the new administration, is government change.

Thus the State Department shapes the cable news coverage to insure that the Assad government is routinely vilified, assumed to be an evil. The Syrian army is presented, not as the most respected institution in the country, but as the enemy of its people, barrel-bombing them. So if it’s reported that a Syrian warplane was shot down by a U.S. warplane over Syria, what’s the problem?

Expert analysts are explaining that the U.S. was acting in self-defense in shooting down the Syrian plane in Syria. They appear to sincerely believe what they say, and perhaps persuade their audience—even after so many lies have been exposed and you’d think public skepticism at its height.

As I write there is more “breaking” news. It appears the Russians, while still “calm,” are also getting firm. The U.S. has gone too far, shooting down the plane of a Russian-allied force in a Russia-allied country. The Russians have consistently appealed to the U.S. to coordinate anti-ISIL, anti-al-Nusra efforts in Syria; a “memorandum on air safety”  intended to prevent mid-air collisions has been in effect since last October, although the U.S. has violated it by bombing a Syrian army position. Now Russia is pulling out and announcing that it will treat U.S. jets in Syrian airspace as “targets.” (Barbara Starr—who you’ve noticed represents the Pentagon on CNN—however says the line’s still open, and there are apparently communications between Russian forces in Latakia and U.S. forces in Qatar.)

The Russian Defense Ministry’s calm statement reads: “All kinds of airborne vehicles, including aircraft and UAVs of the international coalition detected to the west of the Euphrates River will be tracked by the Russian SAM systems as air targets.” This is a clear warning to the Trump administration to back off from attacks on state forces in Syria.

Moscow is surely puzzled by conflicting signals from Washington regarding Syria and U.S. foreign policy in general. If there had been some optimism about a joint effort against terrorists in Syria, this incident may destroy it. 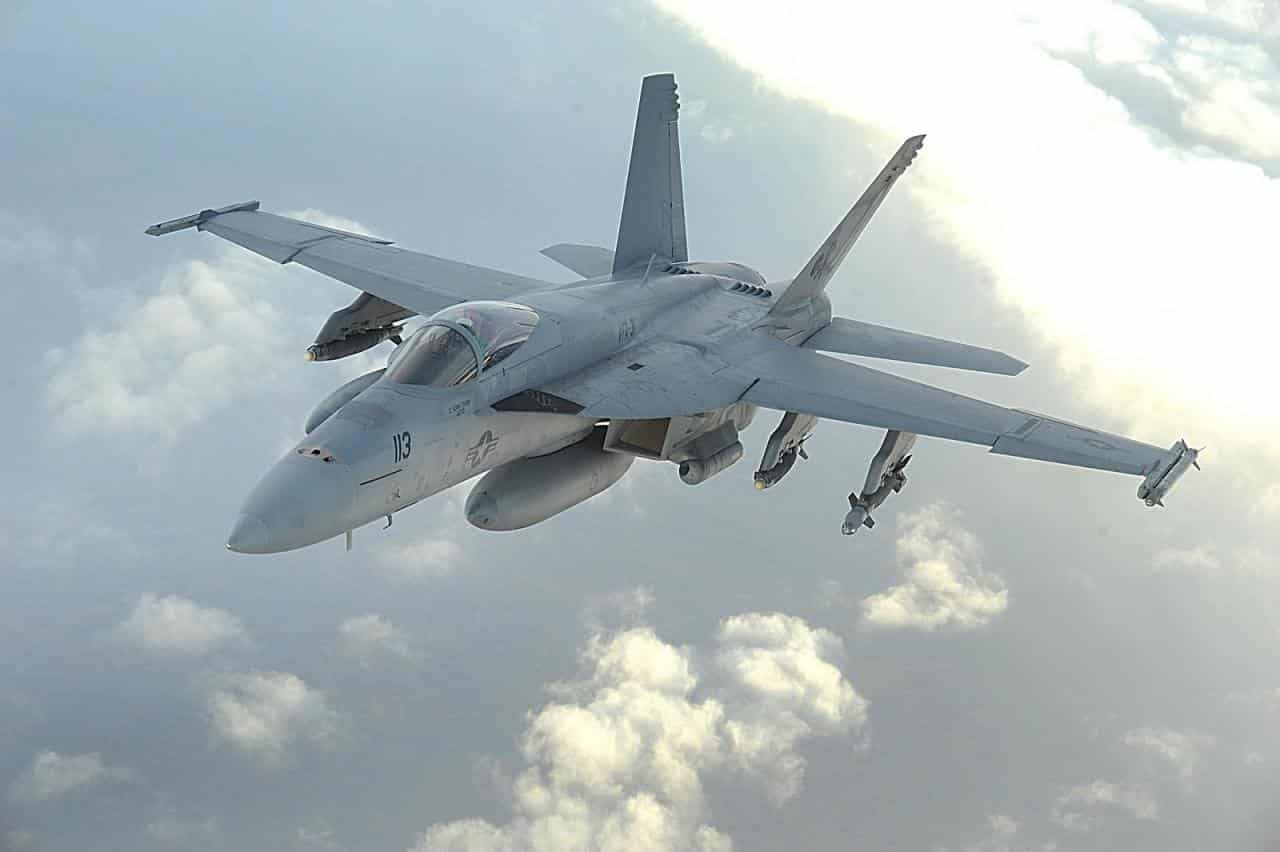 Let’s say a S-300 Grumble missile shoots down one of those Super Hornets today. A Super Hornet whose presence is rejected by the Russian-allied Syrian government. A U.S. pilot killed. Massive immediate outrage in this country—about a Russian attack on one of us, wicked just by definition. And it’s official truth that Russia hacked the election. Russia we are told is an adversary. Trump cannot be viewed as a Putin stooge. Retaliation needed, immediately, in a country becoming a free-for-all for Arab, Turkish, Iranian, Russian and U.S. and European intervention.

I think the calm temporary. Iranian missiles are hitting Raqqa in a retaliatory strike on ISIL, which has struck in Iran. Turkey is bombing U.S. Kurdish allies in Syria. The mix of forces that will take (and likely destroy) Raqqa are not clear. A young crazed Kim Jung-un type is in charge of Saudi Arabia throwing money at jihadis in Syria. Hizbollah Lebanese forces and Iraqi Shiite militia forces are fighting the ISIL and al-Qaeda forces with the government. It is a hellish situation that could become much more so.

The people should demand that the U.S. just back off. How can those who generated ISIL kill it?

Trump as I recall suggested during his campaign that the U.S. leave the defeat of ISIL to Russia, or at least to work with Russia against ISIL. He was of course vague, inconsistent, and using a sixth grade vocabulary, but he seemed to want to avoid something like this provocation. One has to ask, who does want it?

About the Author
Gary Leupp is Professor of History at Tufts University, and holds a secondary appointment in the Department of Religion. He is the author of Servants, Shophands and Laborers in in the Cities of Tokugawa Japan; Male Colors: The Construction of Homosexuality in Tokugawa Japan; and Interracial Intimacy in Japan: Western Men and Japanese Women, 1543-1900. He is a contributor to Hopeless: Barack Obama and the Politics of Illusion, (AK Press). He can be reached at: gleupp@tufts.edu

The Syrian government says its plane was bombing ISIL forces. (This could be perceived as an unequivocally good act, ISIL being what it is.) But the U.S. says the plane was bombing its proxies, who are themselves battling ISIL around Raqqa with embedded U.S. advisors. These proxies are mainly Kurds who want independence and other forces allied to the U.S. and its Arab allies in a common effort to ultimately topple the Assad government. And everyone paying attention knows these proxies include forces closely aligned with what used to be called al-Nusra. Forces the U.S. considers friends are considered by Damascus terrorists.

The Body Count Rises in the U.S. War Against Black People

CONFIRMED: US backs down as Russia targets US aircraft in Syria