Home AMERICAN BRAINWASH Russia a Hostile Power? Just the Opposite!

Russia a Hostile Power? Just the Opposite!

BE SURE TO PASS OUR ARTICLES ON TO KIN, FRIENDS AND COLLEAGUES
SOURCE:  Stephen Lendman)
Vilifying Russia is longstanding since its 1917 revolution - 100 years of US hostility toward the country, under Putin for its sovereign independence and opposition to Washington’s imperial agenda. On July 12, neocon/CIA-connected Washington Post editors lied, calling Russia “a hostile power,” saying: It “has a lot to do with what Russian President Vladi­mir Putin stood to gain by interfering in the United States’ 2016 presidential election,” adding: “What makes Russia hostile is Mr. Putin’s adherence to, and dependence on, a set of values that are antithetical to what have been, at least until now, bedrock American values.”
..
“He favors spheres of influence over self-determination; corruption over transparency; and repression over democracy. His antipathy toward Hillary Clinton was not personality-driven but based on her advocacy of values that would threaten his rule.”
..
Fact: All of the above is pure rubbish, a triumph of disinformation and Big Lies over truth-telling.
..

On Wednesday, Sergey Lavrov said “(e)very time when they start asking us for many months already why we interfered, we ask the question: present at least a single fact.” 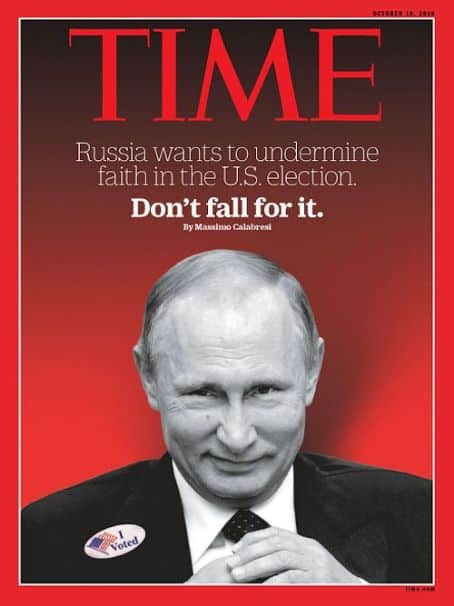 The American media—supported by the rest of the Western press—have exceeded their normal standards of filth and distortion in reporting about Russia and its leadership.

“(W)e have not heard (anything in response) that would substantiate these allegations…We have no doubt, and Russian President Vladimir Putin has said many times, that this was orchestrated in an attempt to reverse the results of election won by Donald Trump.”
..
Last March, Kremlin spokesman Dmitry Peskov called investigations into nonexistent Russian US election meddling “the same old (discredited) song and dance...We have heard nothing new…and are unlikely to hear anything new” because there’s nothing there to report.
..
Nothing changed from then to now. Accusations of Russia US election interference is a deplorable fabricated hoax. Moscow rejects being accused of anything it didn’t do. Yet false claims persist, endlessly proliferated by media scoundrel reports. Russian values under Putin are “antithetical” to America’s lawless imperial agenda, its permanent war policy, its rape, destruction and pillage of one nation after another.
..
Russian democracy shames America’s sham version, its police state apparatus, its global gulag prison system, its appalling contempt for human rights and rule of law principles.
..
WaPo: “Putin has maintained the trappings of democracy…even as he has made them meaningless by shuttering most independent media and eliminating most political opposition. The state now serves Mr. Putin and his cronies, who have become immensely wealthy, rather than the reverse.”
..
Fact: More utter rubbish. Russian media delivering real news, information and analysis are in stark contrast to Western scoundrel media disinformation, Big Lies and fake news. No evidence suggests “Putin and his cronies” amassed ill-gotten wealth. WaPo editors claim US-installed Nazi-infested putschists running Ukraine represent democracy in action.
..
“Mr. Putin invaded the country, seized part of its territory and initiated an ugly civil war that helps keep Ukraine from prospering,” they roared. With US support and encouragement, Kiev’s puppet regime continues waging naked aggression against its own people. Russia didn’t invade Ukraine or seize any of its territory.
..
WaPo: “…Putin’s hacking and fake-news campaign began as an effort simply to damage Ms. Clinton’s reputation on her road to the White House or to make the democratic process look as ugly as possible.” No Russian hacking or fake news campaign occurred, no attempt to damage Hillary, no attack on America’s system - no interference in the internal affairs of any country throughout the Russian Federation’s existence. WaPo despicably called Putin a “Russian dictator.” Its reports, commentaries and editorials come right out of the CIA’s playbook.
..
As long as the agency exists, world peace, stability and security remain unattainable.
ABOUT THE AUTHOR

STEPHEN LENDMAN was born in 1934 in Boston, MA. In 1956, he received a BA from Harvard University. Two years of US Army service followed, then an MBA from the Wharton School at the University of Pennsylvania in 1960. After working seven years as a marketing research analyst, he joined the Lendman Group family business in 1967. He remained there until retiring at year end 1999. Writing on major world and national issues began in summer 2005. In early 2007, radio hosting followed. Lendman now hosts the Progressive Radio News Hour on the Progressive Radio Network three times weekly. Distinguished guests are featured. Listen live or archived. Major world and national issues are discussed. Lendman is a 2008 Project Censored winner and 2011 Mexican Journalists Club international journalism award recipient.

No Russian hacking or fake news campaign occurred, no attempt to damage Hillary, no attack on America’s system – no interference in the internal affairs of any country throughout the Russian Federation’s existence. WaPo despicably called Putin a “Russian dictator.” Its reports, commentaries and editorials come right out of the CIA’s playbook. As long as the agency exists, world peace, stability and security remain unattainable.

Comparing ‘coups’: Macron’s is one, Maduro’s is not

Some of us noticed that within a week of the election, the Clinton wing jumped from the predictable “Trump stole the election!” to the inexplicable, “Russia stole the election!” Every effort to date to explain just what Russia did that had any effect on the election, has fallen flat under the weight of the the facts. They then just simply double-down on reciting the allegations. Undoubtedly, Trump has watched this with great satisfaction.