Home AMERICAN BRAINWASH Climate change and the struggle against capitalism

Climate change and the struggle against capitalism

Two events this week have focused renewed popular attention on the dangers inherent in global warming and climate change. The first was the report published Monday in the Proceedings of the National Academy of Sciences of the United States of America (PNAS) warning that human activity is precipitating “biological annihilation” and a mass extinction event, the sixth such phenomenon in the evolution of life on planet Earth. 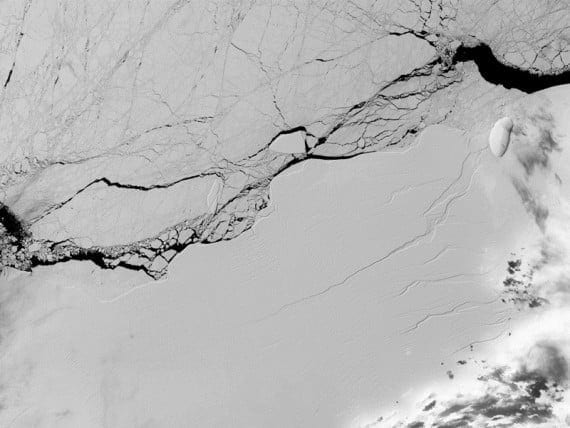 The report examined historical data for 200 land animals and found that most were in crisis, with nearly all having lost a substantial portion of their geographic ranges and more than 40 percent having suffered severe population declines (80 percent or more). Lions, cheetahs, giraffes and numerous bird species were among those suffering the greatest declines.

The second event was the collapse Wednesday of a portion of Antarctica’s Larsen C ice shelf, with the formation of a massive iceberg, estimated at one trillion tons of ice, equivalent to twice the fresh water in Lake Erie. The iceberg has the same land area as the US state of Delaware (or, to compare it to some of the world’s best-known islands, it is larger than Bali, Trinidad or Canada’s Prince Edward Island, but slightly smaller than Corsica, Cyprus or Puerto Rico).

Scientists who specialize in the Antarctic were divided over whether climate change was the main precipitating event for the “calving” of a new giant iceberg. Such break-offs are a regular part of the life-cycle of the gigantic ice sheets that cover the southern continent. But average ocean temperatures around Antarctica have been rising for a quarter century, particularly in the region near Larsen C.

There is no doubt that global warming has had a major, long-term effect on Antarctica, evidenced by previous collapses of the ice sheets known as Larsen A in 1995 and Larsen B in 2002. The concern now is that break-off of the huge iceberg, with 12 percent of the total surface of Larsen C, could be the precursor of the collapse of the entire ice sheet, which would be a major geophysical event.

The erosion of Antarctic ice is part of a larger global process, including the rapid melting of the northern ice cap covering the Arctic Ocean, the shrinkage of the Greenland ice cap, and the disintegration of glaciers throughout the world under the impact of global warming.

It is worth pointing out that the study of Larsen C has mainly been conducted through satellite instruments placed in orbit by NASA and the European Space Agency. NASA’s Moderate Resolution Imaging Spectroradiometer (MODIS) on the Aqua satellite first revealed the break-off of the iceberg. Its complete separation from Larsen C was confirmed by NASA’s polar-orbiting Visible Infrared Imaging Radiometer Suite (VIIRS) instrument.

Such Earth-study satellite missions are targeted for cutback or outright elimination in the Trump administration’s budget plans for Fiscal Year 2018. Republican Senator Ted Cruz, who heads the Senate committee with jurisdiction over NASA, has repeatedly pressed for NASA to focus its efforts on other planets in the solar system while avoiding similar study of the Earth, out of concern that NASA’s efforts would bolster the scientific consensus that global warming and climate change are major threats.

The reactionary pig-headedness of the Trump administration and the Republican right can lead those genuinely concerned about the dangers of global warming to view more favorably the supposed rationalism of the Obama administration, the Democratic Party, and their allies in Europe like Germany’s Angela Merkel. This would be a catastrophic mistake.

The measures proposed by the bourgeois establishment politicians—Democrats in the United States, conservatives and Social Democrats in Europe—amount to giving lip service to the dangers posed by global warming, while doing little or nothing. The much-vaunted Paris Accord, from which Trump withdrew US support last month, was entirely toothless.

Significantly, the Paris Accord had the support of the world’s corporate elite, the CEOs who bear the main responsibility for carbon emissions and other pollution. Less than 100 corporations account for two-thirds of all man-made carbon emissions.

A special word needs to be said here about “Green” parties, which trace their origins to the environmental movements of the late 1960s and early 1970s, but have, once in power, revealed themselves as shameless servants of big business. Their evolution shows the impossibility of addressing the environmental crisis on the basis of the existing economic system.

What is needed in the climate crisis is a global effort, mobilizing the scientific, technological and productive resources of the entire human race, combining both a reduction in the carbon “footprint” of society through developing more efficient energy systems, and methods to actually retrieve carbon from the atmosphere (so-called “carbon capture”) that will begin the process of lowering the proportion of carbon dioxide back towards historically sustainable levels.

Such efforts immediately run up against insuperable barriers under capitalism: the private ownership of the means of production by a handful of capitalist billionaires and giant corporations, and the division of the world into rival capitalist nation-states. That only demonstrates that it is impossible to carry out a serious effort to reverse global warming and climate change within the framework of the profit system.

The climate crisis is yet another reason, along with mounting social inequality, attacks on democratic rights, and the growing threat of imperialist world war, for putting an end to capitalism and establishing a socialist society in which the productive forces are subordinated to the needs of the population of this planet, not to private profit.

The same scientific advances that, in the hands of the billionaires, threaten the destruction of the planet, can, in hands of the working class, the vast majority of humanity, lead to the opposite result: the creation of a society which abolishes poverty, war and social injustice along with the dangers posed by climate change and global warming.

About the Author
Patrick Martin is a senior editorial writer and member of the Social Equality Party (SEP), a Trotskyist formation that publishes wsws.org, a socialist publication.

A special word needs to be said here about “Green” parties, which trace their origins to the environmental movements of the late 1960s and early 1970s, but have, once in power, revealed themselves as shameless servants of big business. Their evolution shows the impossibility of addressing the environmental crisis on the basis of the existing economic system. What is needed in the climate crisis is a global effort, mobilizing the scientific, technological and productive resources of the entire human race, combining both a reduction in the carbon “footprint” of society through developing more efficient energy systems, and methods to actually retrieve carbon from the atmosphere (so-called “carbon capture”) that will begin the process of lowering the proportion of carbon dioxide back towards historically sustainable levels.