“I can’t tell you what art does and how it does it, but I know that often art has judged the judges, pleaded revenge to the innocent, and shown to the future what the past suffered, so that it has never been forgotten. Art, when it functions like this, becomes a meeting place of the invisible, the irreducible, the enduring, guts, and honor.”    John Berger 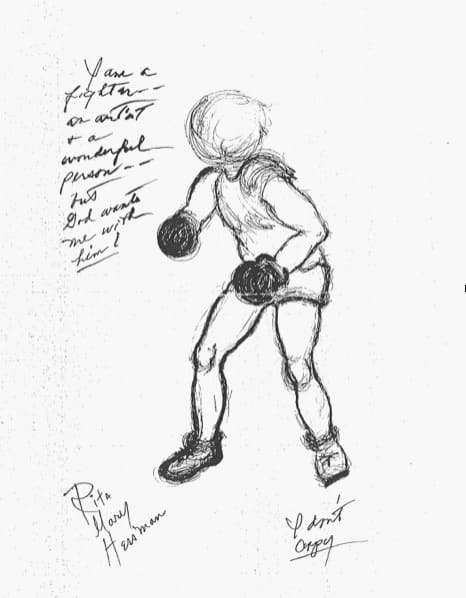 Rare bird of flamboyant plumage,
I picture you still in my mind’s eye,
Mutely sedated in that frozen nest
You never could leave, Ward 3194
Decatur Ave. Bronx Rome via Hollywood,
Twelve stories high over the city
of your  birth,
Teetering atop Martha Washington on 29th St,
Wife of the father of the country
of lies.
But this, rare bird, is the truth.

Sister, your face I imagine twisted
With the question that always tormented
you:
Why could you never fly your way
Away to the land of the living?
Woman without your own name,
Forever weighing your flesh for the secret
judge
Who always told you to disappear,
The verdict rigged by you in advance,
You with your tinsel town ideals
Of passive slim starlets waiting to be
discovered
By some fat mogul drooling dollar
signs
As the birds prim and prance for him,
Woman without a way to work your way
through the world,
You who feared to appear that self
You always were you feared you learned
Fear that the big bad world would eat
you
If you dared enter its mouth,
Cruel world, no place for a little girl,
Would devour you whole piecemeal
Eat you as you would not eat
The food you truly hungered for,
You called Sissy from a young age,
A sissy a timid a cowardly person,
Also an effeminate man or boy,
Sister, I see your face marked
With the pain of that twisted question:
Were you a sissy or not?

After the fact your act no one
Wanted to admit you were not
The name you were named so long
Which you hated till the bitter end.
The end the end to leap the question
The tension of being stretched taut
Between the first and last unknown
Was too much for you.  In this, Sis,
You were very much the child
You thought you had outgrown,
The heir of those infallible answers
from your Papa in Rome.
To live with the wrong questions
Means to die for answers
That only kill you anyway.
Better to assume there is no salvation
outside the world
Than to leap into a promise made by those
Resigned to life as a lousy dead-end job,
A position to be endured until the final
promotion.

You shouldn’t have done it.
There is no way back now.
No one was calling you home.
How could he?  You never left
Home, you never flew your way away
And found yourself in the going.
Damn it, my anger burns with the urge
To pull you back from the edge
Of that ledge you left your mark upon.
Not the world, which was yours to eat,
A succulent fruit hanging on the tree
of life,
This world you saw as just a way
To a home somewhere behind your eyes.

Sis, you shouldn’t have looked to the skies
And the man who would take you home with him.
No, he was not your kind of guy
That cop you placed by the scale
To say too much, she weighs too much,
She wants too much, let her reduce
The flesh that fans the flames of female
lust,
Let her cut herself down to size,
No bigger than a happy housewife,
Eating her guts out before the empty
screen,
Strangling the scream desperate to emerge
From behind the smile so well preserved,
A model actress in the wrong play,
Frozen in a frame from Silver Screen,
dead
Before the tube flickering in her living
room.
Let her above all never transgress the law
That says the timing’s never right
For living just for waiting always
For the day of death when living starts.

The judge the cop the father fix who art
in heaven,
All the women waiting to be taken
home
To rest in the mess of the family
nest:
Sis, these are the images you took
to heart,
The mad holy pictures you couldn’t destroy
but which
Turned back on you in holy rage
And eased you over the only hurdle
You ever really wanted to jump.

If someone said that life was too much
for you,
He’d be right, wouldn’t he?  Too god-damned
right,
Too much of everything that death denies
That dirty bastard death the creep
The shithead you made father lover savior.
Shit, Sis, you shouldn’t have done it.
There is absolutely no way back now.
You didn’t go home that Sunday morn
You dressed for church and left us
in the lurch,
Jumped out of the life you never led
Twelve stories high over the city
of your death.

Rare bird upon the earth and very like
a black swan,
Rare bird of flamboyant plumage,
To die is not to fly.  Still,
Out of my heart bubbling with rage
I picture you in my mind’s eye, here
On the pulsing earth our only home
Flying soaring smiling through the daring
painting
That could have been your life.
Sis, you shouldn’t have done it.
I wish I could draw you back to life.

ABOUT THE AUTHOR
Educated in the classics, philosophy, literature, theology, and sociology, Ed Curtin teaches sociology at Massachusetts College of Liberal Arts. His writing on varied topics has appeared widely over many years. He states: “I write as a public intellectual for the general public, not as a specialist for a narrow readership. I believe a non-committal sociology is an impossibility and therefore see all my work as an effort to enhance human freedom through understanding.”   His website is http://edwardcurtin.com/ .

We all know that Amazon is an uber-capitalist octopus swallowing ever more industries and openly collaborating with the CIA. Amazon CEO Jeff Bezos, probably the #2 richest man on earth, is no friend of radicals, or socialist revolution, that’s for sure. But this app, ironically, promises to donate some money to whoever uses it to search and make a purchase on Amazon. Since many people will go on using Amazon due to habit or convenience, make it kick back a few dollars our way to continue our pro-peace and anti-imperialist work. Our financial situation leaves us no choice at this point. So consider it. A boycott of Amazon by lefties at this point is hardly going to register on their radar. But any funding we get, at our puny level, will keep us going. Simple as that.

Angry China warns US on North Korea: back off and talk or risk disaster

Barbara Lee and Tulsi Gabbard Side with War Party on Sanctions

I love the rare bird upon the earth and find it sad but a refreshing change of style and format. OK, not often, but this truly is a rare bird and much like a black swan. Thanks to both startling writer and daring publisher.

I read this poem at another format a few days ago. It affected me deeply then. It reminds me a little of Ginsberg’s “Kaddish” (probably his best poem, though “Howl,” also excellent, gets most of the attention). Curtin’s poem is intimate and so well-stated, a careful reader can get “lost” in it, yet feel secure, for the writer comes back to his themes, develops the injured personality of his missed and beloved sister, and we feel the loss–even as we admire the skill. John Berger’s epigraph is perfectly selected. And Curtin has achieved W.H. Auden’s simple, audacious and profound definition of poetry as “memorable speech.”