Home ABOMINATIONS North Korea versus the United States: Who are the Demons? North Korea Lost 30% of Its Population as a Result of US Bombings in the 1950s

North Korea versus the United States: Who are the Demons? North Korea Lost 30% of Its Population as a Result of US Bombings in the 1950s

This article was first published in December 2011. The US constitutes a security threat to the DPRK

The American people should, in the words of Vietnam War Veteran Brian Willson  “place themselves in the position of people living in targeted countries. That North Korea, a nation of 24 million people, i.e., one-twentieth the population of the U.S., many of them poor, a land slightly larger in area than the U.S. state of Pennsylvania, continues to be one of the most demonized nations and least understood, totally perplexes the Korean people.”

What most people in America do not know –and which is particularly relevant when assessing the “threats” of the DPRK to World peace– is that North Korea lost thirty percent of its population as a result of  US led bombings in the 1950s. US military sources confirm that 20 percent of North Korea’s population was killed off over a three period of intensive bombings:

“After destroying North Korea’s 78 cities and thousands of her villages, and killing countless numbers of her civilians, [General] LeMay remarked, “Over a period of three years or so we killed off – what – twenty percent of the population.” It is now believed that the population north of the imposed 38th Parallel lost nearly a third its population of 8 – 9 million people during the 37-month long “hot” war, 1950 – 1953, perhaps an unprecedented percentage of mortality suffered by one nation due to the belligerance of another.” (quoted in Richard Rhodes, “The General and World War III,” The New Yorker, June 19, 1995, p. 53.) 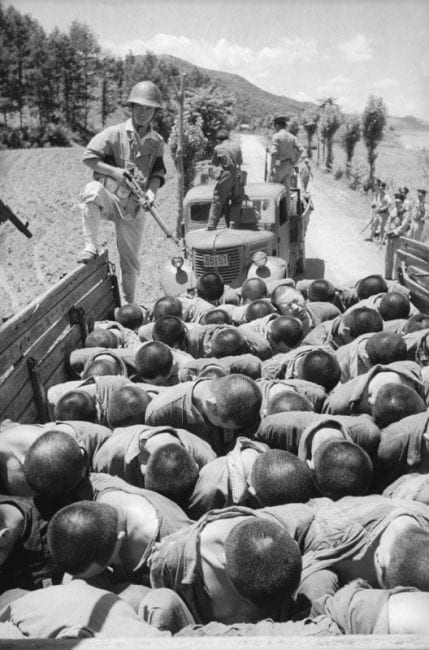 With full encouragement by their masters, the US army, South Korean soldiers (the South Korean military, like the South Vietnam military, has long been a Pentagon puppet army) murdered suspected South Korean "traitors" (opponents of US meddling in Korea or supporters of reunification). The image shows South Korean victims being herded into lorries on their way to execution during the Korean War, July 29, 1950 - The Bodo League massacre was a massacre and war crime against communists that occurred in the summer of 1950 during the Korean War. The US/allied troops committed many other massacres themselves, not to mention the Nuremberg-class crimes perpetrated by the US air force on North Korea itself via carpet bombing.

These figures of civilian deaths in North Korea should also be compared to those compiled for Iraq by the Lancet Study (John Hopkins School of Public Health). The Lancet study estimated a total of 655,000 Iraqi civilian deaths, following the US led invasion (March 2003- June 2006).

The US never apologized for having killed 30 percent of North Korea’s population. Quite the opposite. The main thrust of US foreign policy has been to demonize the victims of US led wars.

For more than half a century, Washington has contributed to the political isolation and impoverishment of North Korea. Moreover, US sponsored sanctions on Pyongyang have contributed to destabilizing the country’s economy

North Korea has been portrayed as part of an “axis of evil”. For what?

[dropcap]T[/dropcap]he unspoken victim of US military aggression, the DPRK is portrayed as a failed war-mongering “Rogue State”, a “State sponsor of terrorism” and a “threat to World peace”. These stylized accusations become part of a consensus, which we dare not question. The Lie becomes the Truth. North Korea is heralded as a threat. America is not the aggressor but “the victim”.

Washington’s intent from the very outset was to destroy North Korea and demonize an entire population. The US has also stood in the way of the reunification of North and South Korea.

People across America can put politics aside and relate to the suffering and hardships of the people of North Korea. War Veteran Brian Willson provides a moving assessment of the plight of the North Korean people:

“Everyone I talked with, dozens and dozens of folks, lost one if not many more family members during the war, especially from the continuous bombing, much of it incendiary and napalm, deliberately dropped on virtually every space in the country. “Every means of communication, every installation, factory, city, and village” was ordered bombed by General MacArthur in the fall of 1950. It never stopped until the day of the armistice on July 27, 1953. The pained memories of people are still obvious, and their anger at “America” is often expressed, though they were very welcoming and gracious to me. Ten million Korean families remain permanently separated from each other due to the military patrolled and fenced dividing line spanning 150 miles across the entire Peninsula.

Let us make it very clear here for western readers. North Korea was virtually totally destroyed during the “Korean War.” U.S. General Douglas MacArthur’s architect for the criminal air campaign was Strategic Air Command head General Curtis LeMay who had proudly conducted the earlier March 10 – August 15, 1945 continuous incendiary bombings of Japan that had destroyed 63 major cities and murdered a million citizens. (The deadly Atomic bombings actually killed far fewer people.).Eight years later, after destroying North Korea’s 78 cities and thousands of her villages, and killing countless numbers of her civilians, LeMay remarked, “Over a period of three years or so we killed off – what – twenty percent of the population.” It is now believed that the population north of the imposed 38th Parallel lost nearly a third its population of 8 – 9 million people during the 37-month long “hot” war, 1950 – 1953, perhaps an unprecedented percentage of mortality suffered by one nation due to the belligerance of another.

Virtually every person wanted to know what I thought of Bush’s recent accusation of North Korea as part of an “axis of evil.” I shared with them my own outrage and fears, and they seemed relieved to know that not all “Americans” are so cruel and bellicose. As with people in so many other nations with whom the U.S. has treated with hostility, they simply cannot understand why the U.S. is so obsessed with them.”(Brian Willson, Korea and the Axis of Evil, Global Research, October 12, 2006 emphasis added)

Regime Change: What Lies ahead for North Korea?

While US-NATO led wars waged in the wake of what is euphemistically called the post War era, have resulted in millions of civilians deaths, America is upheld as the guardian of democracy and World Peace.

It a bitter irony, Washington’s “peace-making role” in relation to North Korea was casually reconfirmed in a statement by Secretary of State Hillary Clinton following the death of the DPKR’s leader Kim Jong Il.  Clinton “urged North Korea’s new leadership to embrace “the path of peace”: “We are deeply concerned with the well-being of the North Korean people and our thoughts and prayers are with them during these difficult times.”

The State Department spokesperson clarified that Clinton’s words did not constitute as an expression of “condolence” but rather were meant as “a signal of our expectations and hopes for the new regime.” pointing to a scenario of  US sponsored “democratization” and “regime change” under the banner of “Responsibility to Protect” (R2P).

In the words of Hillary Clinton, Washington’s mandate is the “well-being of the North Korean people”, of which, lest we forget, 30 percent were killed in the 1950s during a 37 month-long “humanitarian bombing campaign”… 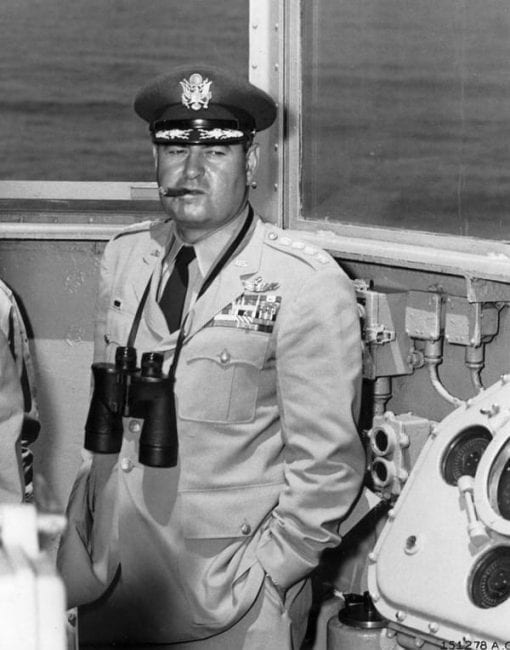 Fresh from his genocidal exploits during WW2, USAF Gen Curtis LeMay, almost a caricature of the military sociopath, advocated the nuking of China, Vietnam, Korea, and of any other nation standing in the way of US supremacy. His sentiments continue to be shared and supported by many figures in the Pentagon, CIA and the ranks of the criminal Neocons, infesting the foreign policy machinery of the Unites States.

About the Author
The author is founder and editor in chief of Global Research, a Canadian site dedicated to leftist analyses of history and geopolitcs.

The Terrorism of Moral Indignation