A dispatch from teleSUR and Mint Press News

Donald Trump, in a statement to reporters during a golfing trip, has said that he's considering a military option against Venezuela. 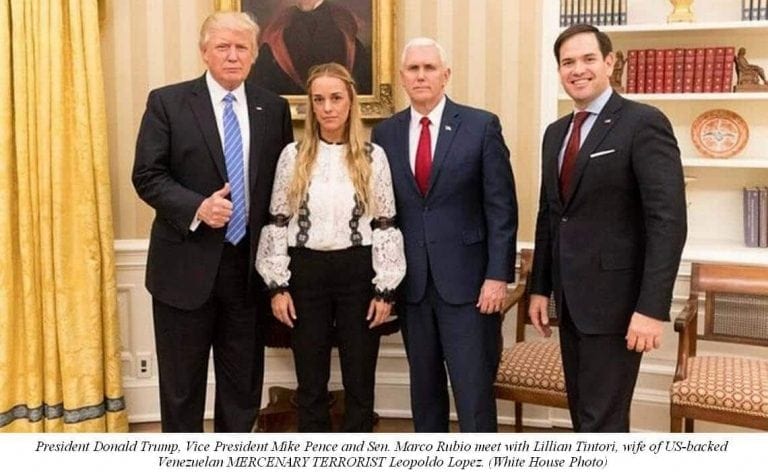 Shortly after the U.S. President Donald Trump said a military option is not being ruled out for Venezuela, the White House issued a statement saying it had rejected a request from his Venezuelan counterpart Nicolas Maduro to have a telephone conversation with him.

It is not clear if Maduro asked for the call before or after Trump’s remarks.

It continued, “The Maduro regime has refused to heed this call, which has been echoed around the region and the world. Instead, Maduro has chosen the path of dictatorship…President Trump will gladly speak with the leader of Venezuela as soon as democracy is restored in that country.”

Speaking after talks at his New Jersey golf club with U.S. Ambassador to the United Nations Nikki Haley and Secretary of State Rex Tillerson, Trump told reporters, “We have many options for Venezuela and by the way I’m not going to rule out military options.”

He added, “We have many options ..this is our neighbour. We are all over the world and we have troops all over the world in places that are very, very far away. Venezuela is not very far away and the people are suffering. They’re dying. We have many options for Venezuela including a possible military option, if necessary.” A reporter then asked if Trump was proposing a U.S. military-led operation.

And he replied, “We don’t talk about it but a military operation, a military option is certainly something that we could pursue.”

The President of Venezuela’s National Constituent Assembly Delcy Rodriguez tweeted “We reject the cowardly, insolent and infamous threats of the United States PDT @realDonaldTrump against the sacred sovereignty of Venezuela”

While the nation’s Defense Minister Vladimir Padrino Lopez called the US president’s threat “an act of madness” and “supreme extremism.” “There is an extremist elite that rules the United States,” Padrino Lopez told state television channel Venezolana de Televisión.

Likewise, the Venezuelan Minister of Communication and Information, Ernesto Villegas, emphasized on Twitter: “Trump’s is the most serious and insolent threat ever made against the Bolivar homeland  #TrumpRespetaVenezuela.”

In a statement, the Pentagon said it had not received any orders regarding Venezuela and referred the media back to the White House.

Trump’s comments come a day after the Venezuelan President Nicolas Maduro reiterated his offer of talks with his U.S. counterpart.

Maduro invited the United States to agree to “mutually respectful” dialogue, adding that he will be in New York in September for the United Nations General Assembly. Maduro also offered an invitation to regional leaders to take part in a meeting of the Community of Latin American and Caribbean States, CELAC, in an effort to improve relations.

Reacting to Trump’s statement, the Chilean Foreign Minister tweeted, “Reiterating all the terms of the Lima Declaration on Venezuela, Chile rejects the threat of military intervention in Venezuela.”

Mexico’s former President Vicente Fox tweeted that only an “imbecile would wage war” on his neighbour and added that violence is not the answer.

.@realDonaldTrump in Latinamerica we don't your war, only an imbecile would wage war on his neighbor land. Violence it's not the answer.

The former Argentine Ambassador to the U.K. and Caracas Alicia Castro criticized anyone who threatens the peace and security of the continent.

And there’s speculation that Trump is using his threats to both Venezuela and North Korea to deflect attention from the mounting difficulties and splits within his own administration. (In large measure triggered by the dishonest campaign of harassment and deligitimation conducted by the CIA/Democrats using lies like Russiagate to attack Trump from the right!—Eds.]

The Mexican journalist Jorge Ramos has tweeted that his warnings can be seen as an attempt to boost his domestic ratings, “Trump, as a child with a new toy, has just discovered that by threatening Venezuela and North Korea he can try to improve his image in the US”.

The Communist Party of Spain also expressed its solidarity with Venezuela against Trump’s threats, saying “We condemn the threat of war aggression from U.S. President Trump to Venezuela. It is an attack on the sovereignty of the Venezuelan people.”

Revolutionary Armed Forces of Colombia – People’s Army spokesperson, Rodrigo Granda tweeted that “Let us not allow that an invasion in the style of Granada or Panama is repeated with impunity. There are evil presidents, and also people of solidarity.”

Honduran President Manuel Zelaya also tweeted in opposition to Trump’s threats, saying “The aggression of the U.S. President against Nicolas Maduro exposes the violent character of the U.S. government against the people of Venezuela.”

Shortly after the U.S. President Donald Trump said a military option is not being ruled out for Venezuela, the White House issued a statement saying it had rejected a request from his Venezuelan counterpart Nicolas Maduro to have a telephone conversation with him.

The Clintons, Trump and White Backlash

Let the American parasites try. Actually the only outcome would be a possible recognition where Caracas might be? on the map by an pea-brained, ignorant population.