Their common threat is right-wing extremism – fascist viciousness stalking a city like many others in America and a Latin American nation, targeted from within and abroad by Trump and bipartisan neocons infesting Washington.

Peaceful Charlottesville residents are threatened by violent white nationalists in their city, police not intervening to stop them. On Saturday, clashes between them and counter-protesters left one woman dead, many others injured. 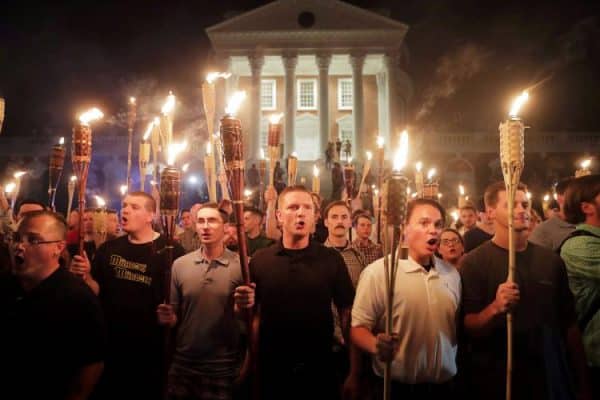 Nazis' torchlight parade in Charlottesville: What would Jefferson think?

Removal of a Confederate monument was a thinly veiled pretext for what happened. Anything could have ignited it. The reality is right-wing extremism in America.

Street violence in Charlottesville is symptomatic of longstanding US culture – hard-right federal, state and local authorities at war with political dissidents; anti-war, environmental, human and civil rights activists; Latino immigrants; refugees of color or the wrong religion; and the nation’s most vulnerable, inner city minority communities turned into battlegrounds.

America’s military/industrial/media complex fosters permanent war against one nation after another, aiming for unchallenged power and profits. Conflicts rage in multiple theaters. Others loom, including possible nuclear war on the Korean peninsula, Russia, China and Iran threatened.As president and military commander-in-chief, the buck stops with Trump. A White House statement said the following:

RT.com has one of the most complete videos of the event

“President Trump stated that the United States is ready, along with its allies, to apply the full range of diplomatic, economic and military measures to achieve that goal.”

“President Trump and President Macron pledged to work together with allies and partners to enforce United Nations sanctions and achieve denuclearization of the Korean Peninsula.”

Hypocrisy defines US politics. In response to Charlottesville violence, Trump said the following:

“We condemn in the strongest possible terms this egregious display of hatred, bigotry and violence on many sides.”

It’s one-sided – in Charlottesville pitting violent white nationalist extremists against peaceful counter-protesters. Trump failed to lay blame where it belongs. Nor in Venezuela, blaming victims, not perpetrators for months of street violence, saying:

“We have many options for Venezuela. And by the way, I am not going to rule out a military option.”

“Venezuela is not very far away, and the people are suffering, and they are dying. We have many options for Venezuela, including a possible military option if necessary.” 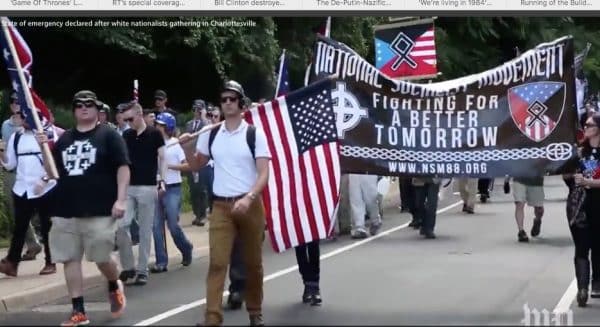 KKK and Neonazis in Charlottesvlle. Despite the noise and the menacing mobs fascism is unlikely in America unless the establishment decided it wants to give it the green light.

Threats against its sovereignty “violate the principles of the United Nations and the norms of international law.”

And a good time was had by all.

Thus, describing the actions in Charlottesville, the US Left shows that promoting a hate group is the best they can do instead of letting it die out of sheer disinterest. They have given the Alt-Right a renewed life to pursue more confrontations to which the Antifa is more than willing to participate in. As Hamburg has clearly shown it is a satisfying dead-end for a revolt, because the opponents have a fine police corps to protect them from any unpleasantness and away from any confrontation, while the protestors can have their satisfaction in disturbing and detaining the police. That is neither a revolution nor forcing a drastic change in the structure of capitalist society. On the contrary, it legitimizes the excesses of oppression by isolating violence from the exact majority of people that need to make a revolution possible. Especially in the USA these demonstrations remain street theatre better suited to Hollywood productions than to work towards real change. The obfuscation is helped by the cable television media who deliberately stoke the sentiments to a powerless frenzy, while the only real aspect of the Trump polarization is seen in the present gathering around Trump Tower in Manhattan where the majority are women who see Trump as the last obnoxious remnant of an already rejected macho paternalism.