HELP ENLIGHTEN YOUR FELLOWS. BE SURE TO PASS THIS ON. SURVIVAL DEPENDS ON IT.
Editor's Note: The text below is part of the Wiki page on this topic. It bears all the limitations (and some of the benefits of Wiki narratives). Its inclusion here is simply to accompany the video on the revolution. Being written mostly by establishmentarians, reactionaries and liberals its text fails to underscore some of the more important aspects in this colossal struggle, for example the fact that the much revered (in US textbooks and Mexican conservative materials) President Francisco Madero was a classical liberal totally unwilling to honor his revolutionary promises to Zapata and Villa in connection with agrarian reform, and in effect betrayed them. That he was eventually betrayed by his own military henchmen does not erase his own abject duplicity.—PG 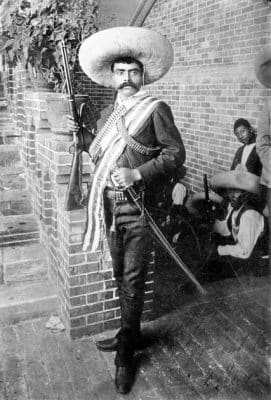 The Mexican Revolution (Spanish: Revolución mexicana) was a major armed struggle c. 1910–1920 radically transforming Mexican culture and government. Although recent research has focused on local and regional aspects of the Revolution, it was a "genuinely national revolution."[4] Its outbreak in 1910 resulted from the failure of the 35-year long regime of Porfirio Díaz to find a managed solution to the presidential succession. This meant there was a political crisis among competing elites and the opportunity for agrarian insurrection.[5] Wealthy landowner Francisco I. Madero challenged Díaz in the 1910 presidential election, and following the rigged results, revolted under the Plan of San Luis Potosí.[6] Armed conflict ousted Díaz from power and a new election was held in 1911, bringing Madero to the presidency.

Left: Of mestizo stock, Morelos born Emiliano Zapata,  was a genuine and incorruptible social and agrarian revolutionary, eventually murdered in an ambush by the forces of Venustiano Carranza.

The origins of the conflict were broadly based in opposition to the Díaz regime, with the 1910 election, becoming the sparking point for the outbreak of a political rebellion. Elements of the Mexican elite hostile to Díaz, led by Madero, expanded to the middle class, the peasantry in some regions, and organized labor.[7] In October 1911, Madero was overwhelmingly elected in a free and fair election. Opposition to the Madero regime increased from both the conservatives, who saw him as too weak and too liberal, and from former revolutionary fighters and the dispossessed, who saw him as too conservative. In February 1913 Madero and his vice president Pino Suárez were forced to resign, were assassinated, and the counter-revolutionary regime of General Victoriano Huerta came to power, backed by the U.S., business interests, and other supporters of the old order. Huerta remained in power from February 1913 until July 1914, when he was forced out by a coalition of different regional revolutionary forces. Then the revolutionaries' attempt to come to a political agreement following Huerta's ouster failed, and Mexico was plunged into a civil war (1914–1915). The Constitutionalist faction under wealthy landowner Venustiano Carranza emerged as the victor in 1915, defeating the revolutionary forces of former Constitutionalist Pancho Villa and forcing revolutionary leader Emiliano Zapata back to guerrilla warfare. Zapata was assassinated in 1919, by agents of President Carranza. 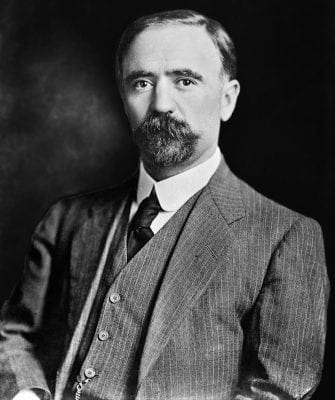 Francisco Madero: a wealthy landowner and liberal opponent of dictator Porfirio Diaz, as president he wasted no time betraying the cause of the people.

The armed conflict lasted for the better part of a decade, until around 1920, and had several distinct phases.[8]Over time the Revolution changed from a revolt against the established order under Díaz to a multi-sided civil war in particular regions with frequently shifting power struggles among factions in the Mexican Revolution. One major result of the revolution was the disappearance of the Federal Army in 1914 which Francisco Madero had kept intact when he was elected in 1911 and General Victoriano Huerta used to oust Madero. Revolutionary forcesunified against Huerta's reactionary regime defeated the Federal forces.[9] Although the conflict was primarily a civil war, foreign powers that had important economic and strategic interests in Mexico figured in the outcome of Mexico's power struggles. The United States played an especially significant role.[10] Out of Mexico's population of 15 million, the losses were high, but numerical estimates vary a great deal. Perhaps 1.5 million people died; nearly 200,000 refugees fled abroad, especially to the United States.[1][11]

Politically, the promulgation of the Mexican Constitution of 1917 is seen by many scholars as the end point of the armed conflict. “Economic and social conditions improved in accordance with revolutionary policies, so that the new society took shape within a framework of official revolutionary institutions,” with the constitution providing that framework.[12] The period 1920–1940 is often considered to be a phase of the Revolution, during which power was consolidated and the revolutionary constitution of 1917 was implemented.[13]

This armed conflict is often categorized as the most important sociopolitical event in Mexico and one of the greatest upheavals of the 20th century;[14] it resulted in an important program of experimentation and reform in social organization.[15] Source: WIKIPEDIA

Bonus feature:
The Making of the Roman Army

The Mexican Revolution (Spanish: Revolución mexicana) was a major armed struggle c. 1910–1920 radically transforming Mexican culture and government. Although recent research has focused on local and regional aspects of the Revolution, it was a “genuinely national revolution.”[4] Its outbreak in 1910 resulted from the failure of the 35-year long regime of Porfirio Díaz to find a managed solution to the presidential succession. This meant there was a political crisis among competing elites and the opportunity for agrarian insurrection.[5]