Home ABOMINATIONS Denunciation of Trump’s Threat of Force Against Venezuela

Trump is the latest in a long line of US warrior presidents, a war party president like his predecessors, continuing America’s war on humanity – using an inordinate amount of the nation’s resources on militarism, mass slaughter and destruction.

He’s currently at war in multiple theaters, threatening more on North Korea, Iran by illegal sanctions and sabotaging the nuclear agreement, risking confrontation with Russia and China, along with a “military option” against Venezuela at his discretion. His hawkish rhetoric ignited a firestorm in Latin America. Venezuelan Defense Minister Vladimir Padrino called his suggestion of possible military action “a crazy act, an act of supreme extremism,” adding:

“There is an extremist elite in the US government, and I really don’t know what is happening and what will happen in the world. If humanity will end. If planet Earth will end.” Former Venezuelan Foreign Minister/current Constituent Assembly president Delcy Rodriguez called his remarks “cowardly, insolent and vile threats.”

“The anti-imperialist people of Venezuela (reject his) insults and aggressions.”

Foreign Minister Jorge Arreasa denounced Trump, saying “Venezuela rejects (his) unfriendly and hostile statements…” His “reckless threats…are designed to draw Latin America and the Caribbean into a conflict that will irrevocably violate stability, peace and security in our region.”

Bolivia’s Evo Morales tweeted: “We condemn US armed intervention against Venezuela, a country that seeks peace in a Constitutional dialogue and regional election.”

Mercosur countries Argentina, Brazil, Paraguay and Uruguay “repudiat(ed) violence and any option that implies the use of force…” Colombia, Chile and Peru made similar statements. Washington still thinks of Latin and Central America as its backyard. Colonial thinking never fades. 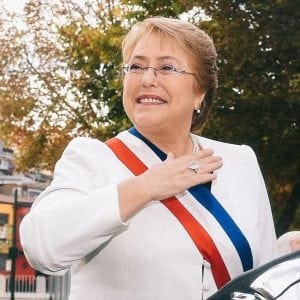 Chile's Bachelet: Socialist rhetoric, capitalist deeds.  US vassals like Michelet and her colleagues are opening the door to a Syria tragedy in Latin America.

Venezuela called the meeting hosted by Peru, "an affront to Venezuela's sovereignty." The Venezuelan Minister of Foreign Affairs Jorge Arreaza has summoned the ambassadors of the countries that took part in a meeting in Lima. Arreaza delivered to each ambassador a formal protest against the meeting which issued a declaration outlining 16 measures to increase pressure against President Nicolas Maduro. These included: qualifying Maduro as a "dictator," rejecting the Constituent Assembly and refusing to acknowledge any legal action or bilateral agreement that does not come from the opposition-controlled National Assembly. Arreaza also called the Lima meeting "an affront to Venezuela's 8 million people who voted in the Constituent Assembly." Speaking after the series of meetings, the minister said he had reminded the ambassadors that left-wing governments in Latin America have never tried to impose their views on right-wing governments. Arreaza added that the ambassadors acknowledged that since Venezuela held elections for the Constituent Assembly on July 30, the country has been at peace. The ambassadors also recognized that candidates from across the political spectrum had enrolled to participate in the regional elections in December. "No one and nobody has the moral authority to judge Venezuela. Venezuela will always be free and sovereign," he added.

The participation of Chile in these sordid maneuvers to isolate and defeat the socialist project in Venezuela is especially galling, considering its recent past of subjugation to a brutal militarily enforced free-market dictatorship and its being headed these days by a former "revolutionary socialist," Michelle Bachelet, who certainly understands these processes.[/su_section]

Will Trump order military intervention to oust Venezuela’s government? Given his rage for wars, anything is possible.