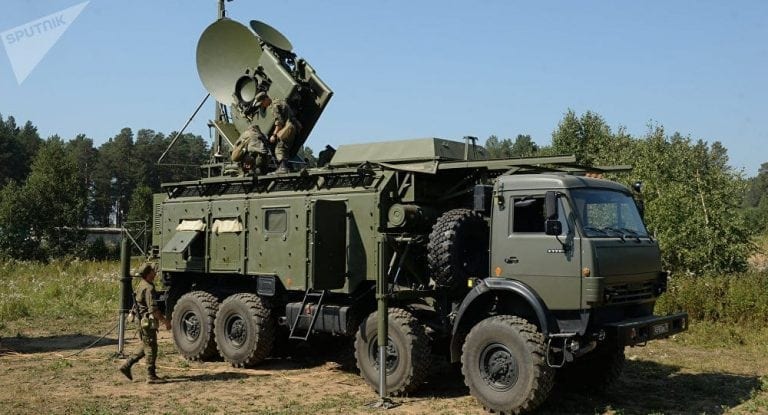 In the wake of successful drills involving the Russian electronic warfare system Krasukha-4, Sputnik looks into why such systems are of paramount importance to the defense capability of the country's army.

During the war games Russia conducted earlier this week, Krasuha-4 operators managed "to blind" the navigation systems and means of targeting high-precision weapons used by Russian Su-34 fighter-bombers, which played the role of enemy aircraft during the drills.

As a result, the "enemy" was unable to detect mock-up targets and launch an airstrike on them.

In May, Vladimir Mikheev, spokesman for Russia's Radio-Electronic Technologies Concern (KRET), said that the production of military equipment related to Russian electronic warfare systems will be increased by about 30 percent in the near future. 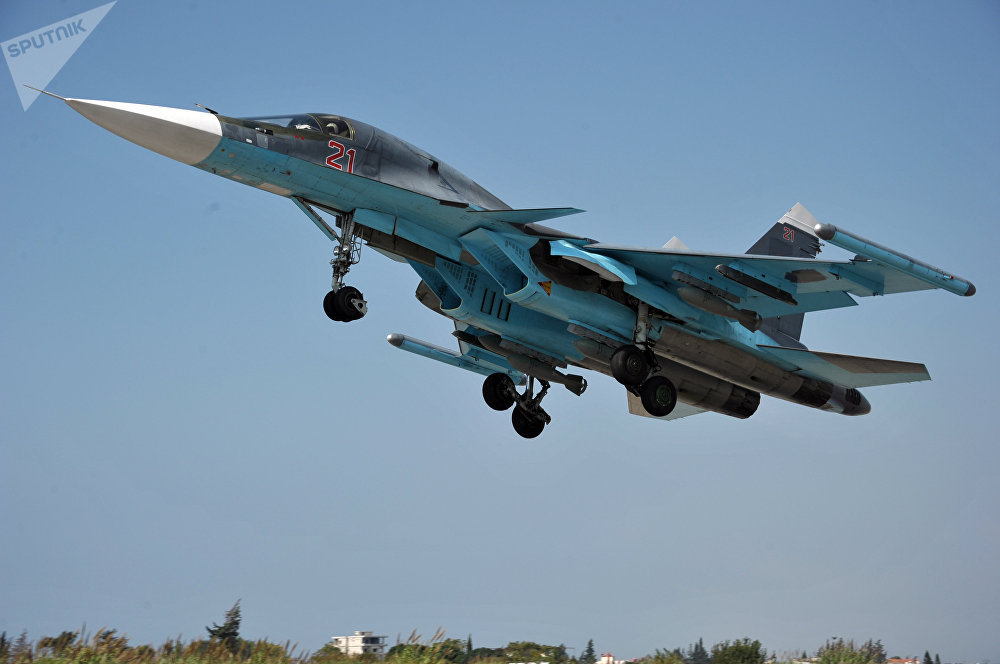 © SPUTNIK/ DMITRY VINOGRADOV A Su-34 fighter-bomber equipped with the Khibiny system takes off from the Hmeymim Air Base in the Syrian province of Latakia. File photo

Speaking at the MAKS-2017 air show in the Moscow Region in August, Mikheev specifically cited a total of 100 Su-34 fighter-bombers that are currently in service with the Russian Aerospace Forces. According to him, all of them are equipped with the Khibiny-10V systems.

The Khibiny is a small torpedo-shaped container which is mounted on the wingtips of aircraft and increases the survival rate of the planes by 25-30 percent.

The Khibiny provides protection to individual aircraft, making it difficult for an enemy to detect and down the plane using air-to-air and ground-to-air missiles, according to RIA Novosti expert Andrey Kots.

Notably, these systems were installed on Russia's Su-34 fighter-bombers and Su-30SM fighter jets, which launched airstrikes on Daesh terrorists in Syria.

As for Russian helicopters, they are equipped with the Vitebsk electronic warfare system, which has Khibiny-like characteristics. In particular, the Vitebsk is installed on Ka-52 attack helicopters and Mi-8MT multi-purpose helicopters. 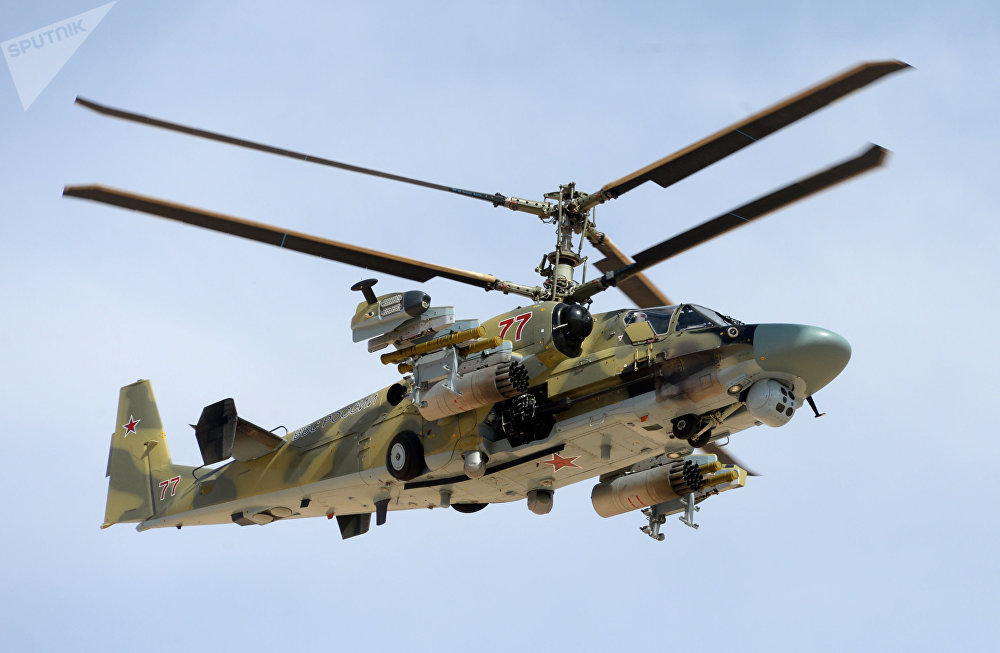 Additionally, Kots mentioned the sophisticated Tarantul (Tarantula) aircraft electronic countermeasures system, which is capable of helping a Su-34 effectively protect other combat aircraft in its squadron from enemy radar.

The system has been developed since 2007 and is now reportedly undergoing state tests, according to Kots, who touted the Tarantul as the future of Russian electronic warfare systems.

The most well-known Russian electronic warfare system is the broadband multifunctional jamming station Krasukha-4, which is built onto a BAZ-6910-022 four-axle-chassis.

The system has a range of 300 kilometers and is designed to counter airborne early warning and control systems and other airborne radar arrays. 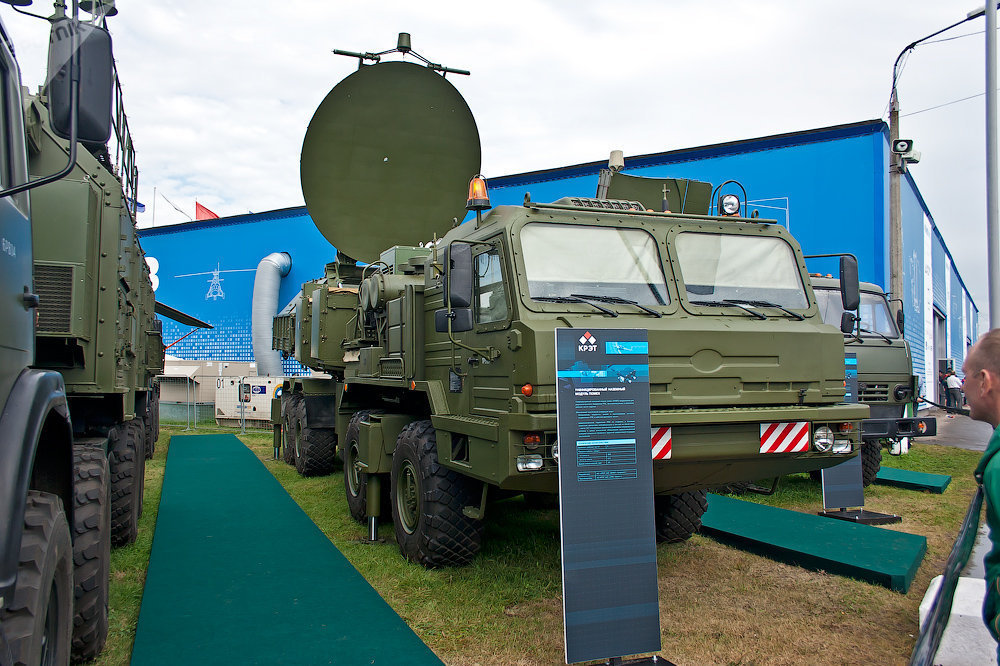 The Krasukha-4's range allows it to effectively disrupt low Earth orbit satellites and cause permanent damage to targeted radio-electronic devices. Ground-based radars are also a viable target for the Krasukha-4 system.

In the future, the Krasukha-4 is expected to tackle targets at extremely high altitudes, including in outer space.

The system will be capable of jamming spy satellites and creating a "dead area" around itself, making it impossible for an enemy to track this zone.

"Since the Cold War, the US has focused on achieving and maintaining technological superiority, primarily in its [aerial and naval weaponry]. We cannot directly compete with them in this regard because they have much more money and opportunities to supply troops annually with modern aircraft, drones and ships. That's why we take asymmetric measures, Murakhovskty said.

"For example, no country except Russia possesses thee automated electronic warfare control systems. Participation of the person is minimal: the operator only needs to choose one of several computerized options of action against a specific goal. This greatly reduces the system's time of response to a particular threat," he added.

On December 4, 2011, an American Lockheed Martin RQ-170 Sentinel unmanned aerial vehicle (UAV) was captured by Iranian forces near the city of Kashmar in northeastern Iran.

It was unclear how Iran managed to seize and then safely land this sophisticated UAV but experts argued that it could be the work of a modern electronic warfare system delivered to Iran either by Russia or China.In April 2014, the state-of-the-art destroyer USS Donald Cook was flown over in the Black Sea by a Russian Su-24 fighter jet which reportedly carried neither bombs nor missiles but only an electronic warfare system which experts said had jammed the warship's on-board radar.

After the fly-over, the destroyer which had approached Russia's territorial waters suddenly changed its course and set sail for a Romanian port.

About the Author
This is a report by Sputnik News agency, which we are happy to reproduce.  Says the Wikipedia, insidiously (Wiki is extensively comtrolled and edited by the CIA and other Western propaganda moles): "Sputnik (Russian pronunciation: [ˈsputʲnʲɪk]; formerly The Voice of Russia) is a news agency, news websites and radio broadcast service established by the Russian government-controlled news agency Rossiya Segodnya.[2] Headquartered in Moscow, Sputnik has regional editorial offices in Washington, Cairo, Beijing, London and Edinburgh; in Sputnik's Washington D.C. office, Peter Martinichev is the editor and Mikhail Safronov is the bureau chief.[3] Sputnik focuses on global politics and economics and is geared towards a non-Russian audience.[4] Sputnik has been widely accused of bias, disinformation[5] and being a Russian propaganda outlet.

They say this with a straight face as if the entire machinery of "news and commentary" throughout the West was not a gigantic instrument of Washington imperial propaganda. Today when we survey the landscape of mass information what stands out is the total servility of the so called "independent media" such as the New York Times, CBS, PBS, BBC, CNN, and similar entities, to US imperialism. The American media, and much of the Western media ARE state propaganda, but they deny it. Sputnik does not cloud its ties to the Russian government, but that does not imply they are purveyors of fake news, like its Western counterparts. In fact, like RT.com they are a damn sight more reliable and trustworthy than western outlets. That's why we use them, and we also use Iran's and China's services, for the same reason. A lot more reliable. Period. For more on this topic, see Caitlin Johnstone's excellent analysis: Propaganda, Human Consciousness, And The Future Of Civilization.