Israeli Prime Murderer Benjamin Netanyahu is once again doing his Chicken Little act. It is not the sky that is falling, but big, bad Iran that is, he claims, “…turning Syria into a base of military entrenchment”, and “wants to use Syria and Lebanon as war fronts against its declared goal to eradicate Israel”.

We keep hearing this tired refrain from Netanyahu; Iran is always ‘just about’ to do something that would destroy sacred Israel (the Prime Murderer never mentions his own actions to ‘eradicate’ Palestine, something that is not a myth, but is actually happening). Since 1992, he has been accusing Iran of being oh-so-close to having nuclear weapons. That year, he said that Iran was three-to-five years away from obtaining them. Twenty years later, after making dire predictions every couple of years, he proclaimed that Iran was “a few months away”. It seems that Iran wasn’t trying very hard during those years. 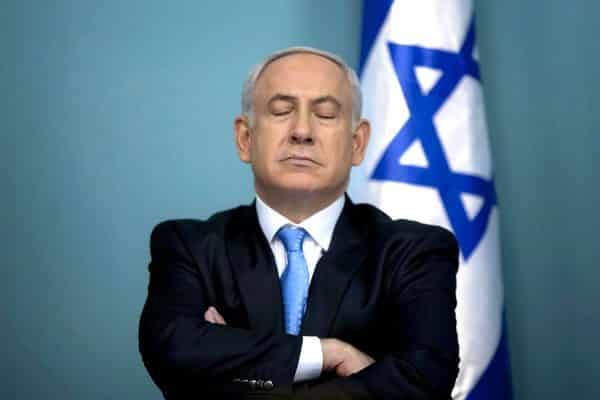 Like other Israeli leaders who preceded him Netanyahu is both an extremist and a terrorist, not to mention a proficient and shameless liar. Controlled overwhelmingly by the Zionist lobby, no American paper, radio or television channel dare criticize him.

This is the leader of the same country that refuses to allow international inspections of its own nuclear facilities. It’s the same country that brutally oppresses the Palestinians, in violation of countless international laws. Iran, on the other hand, hasn’t invaded another country in over 200 years; it supports its allies, as shown in its assistance to Syria, as that country fights U.S.-, Israel- and U.K.- supported terrorists. It also doesn’t have separate laws for Iranians and everyone else; Israel cannot make the same claim (that’s apartheid, in case you didn’t know).

And now the Prime Murderer believes [or, rather, wants us to believe]  that Iran is threatening its borders. Perhaps Israel might be better off if it adhered to international law, and accepted the pre-1967 borders, but that’s unlikely to happen anytime soon.

Let’s look at the possibility that Iran is planning a military base in Syria. The U.S, which, of course, finances all of Israel’s crimes, has military bases all over the world. These, we are told, are to defend and protect the national security of the U.S. The government of Iran, like every other government in the world, has the right and the responsibility of protecting its own national security. With the U.S., at Israel’s behest, forever making threatening gestures to Iran, using the U.S. model of foreign military bases may be an excellent deterrent and protection. Oh but wait; we forget that the U.S. bombs innocent men, women and children all for a good cause; Iran would do it out of evil designs!

Since World War II, the U.S. has killed at least 20,000,000 people, mostly innocent civilians. Israel, since September of 2000, has killed at least 10,000 Palestinians, including close to 3,000 children. Other than the Iran-Iraq war of 1980 – 1988, which resulted from the Iraqi invasion of Iran, the Islamic Republic of Iran is responsible for a fraction of that number, mainly from assisting the government of Basher al-Assad in Syria. There has also been assistance to freedom fighters resisting U.S. imperialism in other nations. But unlike Israel, Iran doesn’t make it a practice to brutally kill innocent men, women and children on a daily basis. And unlike the U.S., which has invaded and/or destabilized at least 30 countries in the last 50 years, the government of Iran is concerned with protecting its citizens, not with killing the citizens of other countries.

Why anyone takes Netanyahu seriously is beyond the comprehension of this writer. In 2002, appearing before the U.S. Congress, the Prime Murderer made this remarkable prediction: “If you take out Saddam, Saddam’s regime, I guarantee you that it will have enormous positive reverberations on the region.” Fifteen years later, with Iraq in chaos, millions dead, the infrastructure destroyed, and foreign troops still terrorizing the people, the world awaits these ‘enormous positive reverberations’ that Netanyahu promised. Of course, he was speaking to an audience he’d bought and paid for with lobby donations, so it’s hardly surprising that they gave then President Bush a blank check to invade Iraq.

When a government leader has serious problems at home, launching a war often causes the citizen-lemmings to rally behind that leader, distracting them and the world from those problems. With Netanyahu on the verge of indictment for a variety of corruption charges, no country in the Middle East is safe; Palestine is probably at the highest risk, since Israelis take great joy in setting up lawn furniture to watch the carnage as Israel bombs Gaza and slaughters men, women and children. But Iran is far from immune; inventing a threat, the Prime Murderer could easily get the U.S. Congress to authorize a bombing campaign, the results of which would make the disaster that resulted from the invasion of Iraq seem like a picnic. Iran is not Iraq; it is far more powerful, with a variety of allies, including Russia. Netanyahu perhaps, with his ego in the way, doesn’t see the unmitigated disaster that he is courting.

Add to that the domestic problems of U.S. President Donald Trump, and a formula for global catastrophe is easy to see. His huge ego, compounded by lack of experience and extreme incompetence, coupled with the rantings and ravings of Netanyahu, may cause the bombs to fall; if that happens, no one in any part of the world will be safe.

The U.S., through its clown-like ambassador to the United Nations, Nikki Haley, has asked the International Atomic Energy Agency (IAEA) to increase its inspection of Iranian facilities, to include areas never agreed to in the Joint Comprehensive Plan of Action (JCPOA), an international agreement regulating Iran’s nuclear program. This writer will not bore the reader by asking again why Iran’s nuclear program must be regulated, but Israel’s is under no such obligation. But the agreement was made and signed, and, as with any agreement, if one party decides it no longer likes it, it cannot demand additional concessions. Iran is in compliance, much to the dismay of Trump, and there is nothing he can do to change the terms now.

So we will all listen as Netanyahu declares his own, personal version of the Chicken Little theme, and see Congress members falling all over themselves to agree with him, despite that most inconvenient JCPOA. We will continue to be astounded at the hypocrisy of the U.S., which condemns Iranian assistance to its neighbors that the U.S. is attempting to overthrow. And we will all hope that somewhere, somehow, cooler heads will prevail, to prevent a world-wide nuclear holocaust.

With the current crop of world leaders, led by Donald Trump, it is easy to fall into despair.

About the Author
Robert Fantina’s latest book is Empire, Racism and Genocide: a History of US Foreign Policy (Red Pill Press).

So we will all listen as Netanyahu declares his own, personal version of the Chicken Little theme, and see Congress members falling all over themselves to agree with him, despite that most inconvenient JCPOA. We will continue to be astounded at the hypocrisy of the U.S., which condemns Iranian assistance to its neighbors that the U.S. is attempting to overthrow. And we will all hope that somewhere, somehow, cooler heads will prevail, to prevent a world-wide nuclear holocaust.

We Should Now Have a Separation of Capitalism and State

Andrey Vajra. Why the U.S. Democrats...