Home ACTIVISTS & HEROES Caleb Maupin: What a Socialist America Would Be Like

Our frequent contributor Caleb Maupin is not given to painting futuristic visions of society, history usually contradicting and surpassing most visionaries' predictions, but in a recent debate, he provided the sketch below. 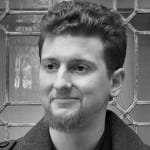 Gallup: Only Republicans’ Trust in Newsmedia Plunged After 2003