Editor’s Note: This is a pretty disturbing article. If it truly reflects American opinion, we are certainly doomed as a nation of sociopaths, or idiots who will endorse anything the state propaganda machine will make them do or think. But the question we must ask is: Who really commissioned this “research? We have our suspects (you can guess too): it’s obviously parties who have an interest in preparing the American population for ugly, even unthinkable crimes. By the same token, why are we to trust the results of such a survey, assuming it was conducted on relatively scientific grounds? Once you have a completely servile, prostituted media, results can be massaged any way you want, like elections; in fact the whole poll can be a fabrication from beginning to end. Keep that in mind. —P. Greanville 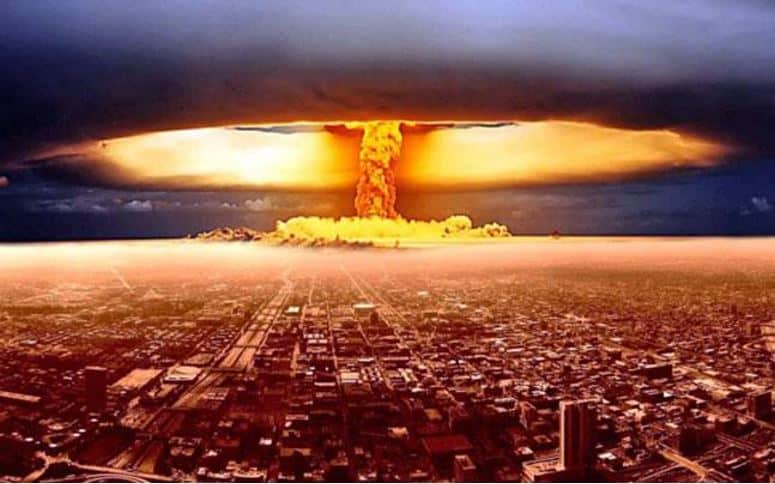 (ANTIMEDIA) — A new survey published by the Massachusetts Institute of Technology (MIT) suggests Americans are willing to make a first nuclear strike against Iran and kill millions of civilians in the process.

According to the report, entitled “Revisiting Hiroshima in Iran,” although the majority of Americans initially approved of President Harry S. Truman’s decision to drop the nuclear bomb in 1945 on two civilian populations in Japan, a poll conducted in 1998 showed the number of Americans who approved of the decision had dropped since the 1970s and 1980s. This trend carried on even until the early 2000s and arguably to the present day.

However, the new survey shows that many Americans continue to support nuclear warfare when posed with a hypothetical (albeit currently nonexistent) threat. As the survey notes, a clear majority of Americans “would approve of using nuclear weapons first against the civilian population of a nonnuclear-armed adversary, killing 2 million Iranian civilians, if they believed that such use would save the lives of 20,000 U.S. soldiers.”

Around 60 percent of respondents polled said they would approve of the decision to kill two million Iranians.

“The survey casts doubt on the power of what experts call the ‘nuclear taboo,’ said Stanford University historian David Holloway, author of ‘Stalin and the Bomb.”’ The idea, or hope, behind the concept is that it’s not just luck that humans haven’t dropped any nuclear weapons for 70 years — that there’s a stigma that makes the use of nuclear weapons unthinkable.”

One would have to wonder if most Americans are even aware that the Trump administration is spending billions of dollars developing its nuclear technology far beyond what America’s rivals can match. Recognizing the nuclear threat America poses to Russia and its interests, particularly by having NATO members surround Russia with its anti-missile defense system, Russian President Vladimir Putin issued a warning last year that Russia was modernizing its missile systems in preparation for what’s to come.

Russia has also warned multiple times about attacking Iran and views Iran as a strategic ally. This is just one of the factors Americans should take into account when considering the use of nuclear weapons.

As Bloomberg noted, there are a number of other factors that should also be examined:

“‘That just means they haven’t thought about it,’ said Brian Toon, a professor of atmospheric science at the University of Colorado. They think nuclear weapons are just big bombs that blow up lots of people, he said, without considering the way a nuclear conflict -– even a ‘small’ one involving some 10 percent of the U.S. arsenal — might poison millions of men, women and children and change the climate enough to starve hundreds of millions.”

What it ultimately shows is that Americans want to fight (and instigate) wars but no longer want to expend their own people commissioning such conflicts. Polls have also demonstrated that the majority of Americans approve of the use of drone warfare against suspected terrorists, another example of Americans approving of killing people without realistically endangering personnel.

In Libya, an American drone flown out of Sicily by an American pilot based in Nevada directly struck Muammar Gaddafi’s motorcade. Little thought is paid to the fact that the U.S. helped assassinate a foreign leader in direct contravention of international law, arguably because no American personnel were killed or even endangered (in contrast, when many Americans think of Libya, they focus on the handful of American lives lost in Benghazi).

This paradigm, identified as one of three schools of thought by the MIT study, is solely concerned with “winning wars and the desire to minimize the loss of lives of their nation’s soldiers.”

This view appeared to hold even when the scenario presented to the respondents was one in which the U.S. aggravated Iran via sanctions and Iran responded with a direct attack on a U.S. aircraft carrier in the Persian Gulf. The Japanese attack on Pearl Harbor in 1941 was also provoked via U.S.-led crippling economic restrictions on Japan, and even the number of military personnel killed in the hypothetical scenario MIT presented to subjects was the same as the number of U.S. personnel who died at Pearl Harbor (though this was not mentioned to respondents).

As we all know, this particular story ended with the complete destruction of Japan’s major cities through conventional bombing, as well as the nuclear decimation of two civilian populations. Also bear in mind that America’s modern day nukes are far more dangerous than the bombs dropped on Hiroshima and Nagasaki, meaning any future nuclear strike would have an even worse impact on the civilian population.

In addition to a majority of Americans’ willingness to use nuclear weapons on civilians, the survey found “an even larger percentage of Americans would approve of a conventional bombing attack designed to kill 100,000 Iranian civilians in the effort to intimidate Iran into surrendering.”

About the Author
Darius Shahtahmasebi has completed a Double Degree in Law and Japanese from the University of Otago, with an interest in human rights, international law and journalism. He's a fully qualified lawyer in two separate jurisdictions, and writes about foreign policy for Anti-Media. Contact Darius: darius.shahtahmasebi@theantimedia.org. Support Darius' work on Patreon: patreon.com/thetvsleaking
In Libya, an American drone flown out of Sicily by an American pilot based in Nevada directly struck Muammar Gaddafi’s motorcade. Little thought is paid to the fact that the U.S. helped assassinate a foreign leader in direct contravention of international law, arguably because no American personnel were killed or even endangered (in contrast, when many Americans think of Libya, they focus on the handful of American lives lost in Benghazi). This paradigm, identified as one of three schools of thought by the MIT study, is solely concerned with “winning wars and the desire to minimize the loss of lives of their nation’s soldiers.”