Free Speech for the Right? A Primer on Key Legal Questions and Principles

HELP ENLIGHTEN YOUR FELLOWS. BE SURE TO PASS THIS ON. SURVIVAL DEPENDS ON IT.
by ANTHONY DIMAGGIO
[su_section background="#eae9e8" speed="12" border="12px solid #7d827a" text_shadow="0px 1px 10px #ffffff"]The rise in national attention to the “alt-right” and fascist-white supremacist protesters has raised questions about the parameters of free speech in America. When can free speech be limited, if ever? What are the implications of attempting to limit controversial speech? And what precedents has the Supreme Court set regarding free speech? I address these questions below via an exploration of historical Supreme Court cases, which show that there’s no legal pretext for a blanket ban on far-right protests.[/su_section] 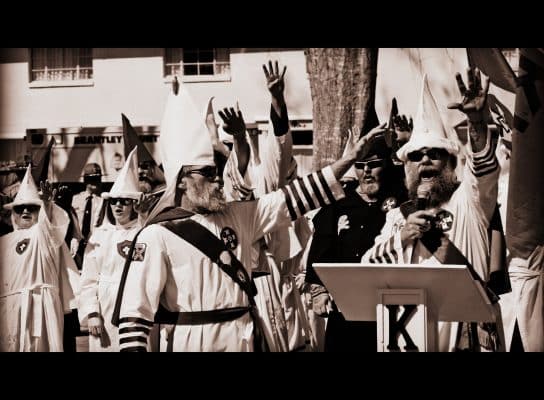 There are numerous precedents related to the topic of controversial speech. One major case is Brandenburg v. Ohio (1969), in which a KKK member, Clarence Brandenburg, spoke at a rally about the possible need for “revengeance” against people of color as related to government initiatives taken in support of minority groups. Brandenburg was convicted under state law and sentenced to 10 years in prison for advocating violence, in violation of a state statute prohibiting support for “crime, sabotage, violence, or unlawful methods of terrorism as a means of accomplishing industrial or political reform.” But in overruling the state conviction, the Supreme Court ruled that government could only restrict incendiary speech if there was an “imminent” violent action is incited by that speech.

The Brandenburg case is important because it demonstrates that there is no court support for shutting down far-right rallies based on the possibility of violence between protesters and their opponents. If an individual can be shown to have participated in an attack on, or murder of another, or to have actively encouraged that act or participated in it, this “speech” is not protected under the First Amendment, as the individual is considered an accessory to assault or murder. The Supreme Court’s reading of permissible and impermissible speech in this case was very narrow. It does not provide carte blanche authority to shutdown rallies due to the possibility of violence. 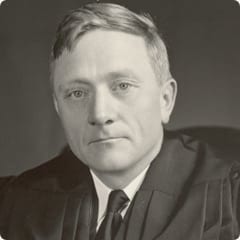 “...a function of free speech under our system is to invite dispute. It may indeed best serve its high purpose when it induces a condition of unrest, creates dissatisfaction with conditions as they are, or even stirs people to anger.” Terminiello is a pivotal case for free speech law, in that it relates to a specific individual whose hateful rhetoric impelled protesters to action and to engage in violence.”—Justice William Douglas

Another important court precedent is the case of Terminiello v. City of Chicago (1949). In that case, Arthur Terminiello, an excommunicated Alabaman Catholic priest and white supremacist, delivered a speech in Chicago in which he attacked Jews, associating them with communist agitation. In response to the speech, 1,000 protesters gathered outside, many throwing rocks and bricks through the windows of the speaking venue, and attempting to break down the doors. Terminiello was convicted under a Chicago “breach of peace” ordinance, which prohibited speech that “stirs the public to anger, invites dispute, brings about a condition of unrest, or creates a disturbance.” The facts of this case are probably the most comparable to modern day protest events like Charlottesville, in which far-right individuals engage in hate speech, and that speech is accompanied by violent attacks against critics and people of color.

The Supreme Court, by a vote of 5-to-4, decided that the “breach of peace” law was an unconstitutional infringement on free speech protections under the First Amendment. Justice William Douglas wrote: “a function of free speech under our system is to invite dispute. It may indeed best serve its high purpose when it induces a condition of unrest, creates dissatisfaction with conditions as they are, or even stirs people to anger.” Terminiello is a pivotal case for free speech law, in that it relates to a specific individual whose hateful rhetoric impelled protesters to action and to engage in violence.” Despite Terminiello’s incitement, the court was clear that there would be no precedent set that allowed for pro-actively shutting down rallies of far-right hatemongers.

A third case, Matal v. Tam (2016), makes explicit the Supreme Court’s declaration that there is no meaningful legal distinction between hate speech and free speech. In this case, the Supreme Court overruled a Federal Circuit Court of Appeals ruling, issued under the Lanham Act, which prohibited the federal government from recognizing trademarks that are “scandalous, immoral, or disparaging,” and that bring “into contempt or disrepute” any “persons, living or dead.” The case in question related to Simon Tam, the singer for the rock band “The Slants,” and the denial of trademark was issued, despite Tam’s effort to “reclaim” the derogatory term against Asian Americans, in the name of “social justice” and “to give a voice to communities who don’t often get a say for themselves.” The Supreme Court sided with Tam, with Justice Samuel Alito delivering the court’s opinion: “Speech that demeans on the basis of race, ethnicity, gender, religion, age, disability, or any other similar ground is hateful; but the proudest boast of our free speech jurisprudence is that we protect the freedom to express ‘the thought that we hate.’”

Supporters of censorship might cite the court case of Schenk v. United States (1919) as evidence that the government has in the past restricted the content of individual speech. In this case, Justice Oliver Wendell Holmes famously wrote that free speech was not absolute:

“The most stringent protection of free speech would not protect a man in falsely shouting fire in a theatre and causing a panic.” But citing this case is deeply problematic for a number of reasons. First, Holmes’ statement was not formally part of the Supreme Court’s opinion in this case, and as a result, it does not have the legal status of law. Second, the Schenck case is no longer even binding legal precedent, as it was overturned in the previously mentioned Brandenburg case in 1969. Third, the case is a great example of the dangers associated with politicizing free speech, and the potential for the American left to be greatly harmed by this practice. Strictly speaking, the case had nothing directly to do with a person yelling fire in a theater. Rather, the Supreme Court justified in this case the imprisonment of leftist protesters during World War I, using the Espionage Act to argue that anti-war activists gave aid and comfort to the enemy, threatened national security, and represented a “clear and present danger” to the country. The case is now widely seen as one of the more embarrassing court precedents in American history, with legitimate dissent against government criminalized, contrary to basic First Amendment free speech and assembly protections. Coupled with the Debs v. U.S. (1919) and Frohwerk v. U.S. (1919) cases, in which peaceful anti-war protesters were also jailed under the Espionage act, Schenck v. U.S. is an ominous reminder of the dangers inherent in politicizing free speech.

[dropcap]T[/dropcap]oday there is much debate among left-of-center Americans about the merits and demerits of cracking down on far-right hate speech. But aside from the legally dubious nature of such a crackdown, there are also pragmatic and principled concerns that arise. “The left” appears to be engaged in a debate over free speech that is taking place within a vacuum, divorced from broader power structures that are already being used to suppress progressive speech and thought. Many on the left seem to think they are in a position to dictate acceptable speech, and the reality is that we are not. In higher education, reactionaries in state legislatures (for example in Wisconsin) revoke tenure and seek to manipulate collegiate course curriculum for political purposes, in complete contempt for academic freedom. Far-right media personalities, politicians, and college administrators attack and even fire leftist professors for expressing their opinions about politics. In the private sector, workers are illegally fired for trying to unionize, and “free speech” is a pipe dream, since these venues don’t fall under First Amendment speech protections. Employers routinely monitor employees’ speech in the workplace and on social media, determining what constitutes acceptable speech. Those who engage in critical speech against their employer, or who express other controversial beliefs are fired “at will.”

The Trump administration demonizes peaceful left protesters in Boston as anti-police, and encourages his rally supporters to commit violence against peaceful critics of the president. Local police forces use violence with impunity against peaceful leftist protesters, as the recent events outside the Phoenix anti-Trump rally demonstrate all too clearly. In a neoliberal era in which leftist views are under assault, discussions about regulating the right’s speech seem increasingly naive, counter-productive, and dangerous. The last thing progressives need to be doing is make far-right fascists and white supremacists look like victims. Their hatred deserves no sympathy from the public. Far-right voices have already taken over American media discourse and the political system. Why should we lend legitimacy to this development?

About the Author
Anthony DiMaggio is an Assistant Professor of Political Science at Lehigh University. He holds a PhD in political communication, and is the author of the newly released: Selling War, Selling Hope: Presidential Rhetoric, the News Media, and U.S. Foreign Policy After 9/11 (Paperback: 2015). He can be reached at: anthonydimaggio612@gmail.com

ANTHONY DIMAGGIO—The Supreme Court, by a vote of 5-to-4, decided that the “breach of peace” law was an unconstitutional infringement on free speech protections under the First Amendment. Justice William Douglas wrote: “a function of free speech under our system is to invite dispute. It may indeed best serve its high purpose when it induces a condition of unrest, creates dissatisfaction with conditions as they are, or even stirs people to anger.”