Home AMERICAN BRAINWASH EMPIRE IS #1 IN EVERYTHING, INCLUDING PUBLIC BUS SYSTEMS, RIGHT?

EMPIRE IS #1 IN EVERYTHING, INCLUDING PUBLIC BUS SYSTEMS, RIGHT?

EMPIRE IS #1 IN EVERYTHING, INCLUDING PUBLIC BUS SYSTEMS, RIGHT?
CHINA RISING RADIO SINOLAND 170928 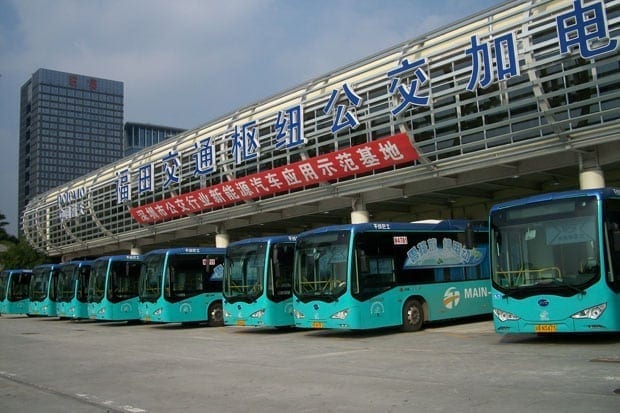 Above: several of the 15,000 electric city buses Shenzhen has put on the streets, many, if not most of them in the last year. They are at a charging station in Futian, the central business district of Shenzhen. Their brand is BYD, a Shenzhen based vehicle company. They replaced them all without much fanfare. I didn’t even notice that they were no longer diesel and gasoline, it happened so fast.

[dropcap]I[/dropcap]n a weekend edition of the Shenzhen Daily newspaper, a short article caught my eye. The title is, “Shenzhen to test self-driving electric buses on two routes”. Now this is something I’d like to see. They are going to be testing them by the end of 2017, which means within the next three months. Pretty cool, huh? All of the technology is being developed by Chinese companies, including Huawei, now one of the world’s biggest mobile phone makers.

Lots of companies in China are piling into big data, robotics, artificial intelligence, drones and driverless everything, because Baba Beijing, their government leaders, have mapped out projections and goals in every one of these categories, out to 2020 (the year before the centennial founding of the Communist Party of China, the CPC), and as far out as 2050, the year after the centennial founding of the (communist) People’s Republic of China. The media here bandy about these dates and historical references a lot. 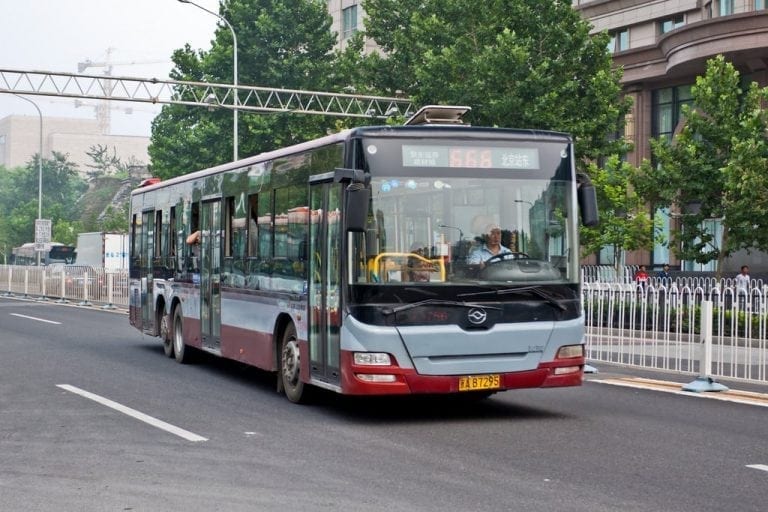 Not all propaganda is bad or deceitful

[dropcap]S[/dropcap]ymbolism is a part of propaganda and propaganda permeates every facet of Chinese daily life. Baba Beijing works tirelessly to inform, educate and persuade its citizens to live a life of good choices, responsible citizenship and social harmony, and it shows, everywhere you travel and interact with people here (http://chinarising.puntopress.com/2017/09/21/harmony-prosperity-and-development-as-official-policy-godfree-roberts-visit-to-shenzhen-china-rising-radio-sinoland-170921/).

What really caught my eye was the last paragraph. By last month, Shenzhen had a total of 16,873 buses, running on 1,019 routes, and what really blew me away, 88% of them are electric. We just moved here in 2016, after a total of 13 years in Beijing, starting in 1990. I recall remarking last year, that many Shenzhen buses were diesel or gasoline powered. As a bicycle rider, out on the mean streets, I notice these kinds of things. So, right under my nose, both physically and figuratively, in just one year, Shenzhen has gone all out to replace its hydrocarbon buses with electric ones.

After reading this Shenzhen article and being an old Beijinger, I checked out my former town. According to this article (http://www.chinadaily.com.cn/china/2017-08/02/content_30333439.htm), Beijing too, has over 1,000 bus lines and is going through a massive e-bus conversion program. Using the numbers given in the article, one can see that Beijing also has around 16,700 buses, which carry 1.7 billion passengers a year. I think it is safe to assume that Shenzhen’s passenger numbers are very similar too. It is also reasonable to add nearby Guangzhou, as well as Shanghai and Chongqing, since they all have at least 23,000,000 inhabitants, like Beijing, compared to Shenzhen’s modest 14 million.

We visited New York City this summer and our whole trip back to the United States was revealing (http://chinarising.puntopress.com/2017/08/26/china-is-the-most-plugged-in-big-economy-in-the-world-china-rising-radio-sinoland-170824/).
I said, “I wonder how NYC compares to big Chinese cities? So, I get to their web page (https://www.ny.com/transportation/buses/), where it says in large font,

Really? The world’s largest fleet of buses, with 4,373 vehicles? But, didn’t we just read that Shenzhen and Beijing each have about four times as many buses? New York carries 666,000,000 passengers a year. But what about them? Beijing, and surely Shenzhen, Guangzhou, Shanghai and Chongqing each carry three times that many, 1.7 billion annually. I suspect that Seoul, Korea and Tokyo, Japan are in this same league too.

I am not saying that NYC does not have a good bus system, or that it does not render a valuable service to its citizens. But, when you bark out, “We’re Number One in the world”, it behooves you to do a little research and fact checking before bragging.

This is typical of the attitude in America, which is sadly provincial and imperial. The baseball world series only has one Canadian team, Toronto, with all the others found in the United States. Yet, in the World Baseball Championship, Japan and Dominican Republic (two times) kicked Uncle Sam’s butt (https://www.cbssports.com/mlb/news/usa-vs-puerto-rico-wbc-championship-game-final-score-highlights-results-u-s-wins-first-ever-world-baseball-classic-in-blowout/).

The same goes for American football. The Super Bowl champs are dubbed “#1 in the world”, yet this game is little- to not played at all outside the US and Canada, and Canadian rules are very different. National Basketball Association (NBA) basketball is much more global and the US team usually wins, so this sport’s bragging rights seem more palatable.

Most Americans can’t even find another country on a world map, not even their own 50 States (http://www.cnn.com/2006/EDUCATION/05/02/geog.test/). When a people are so isolated and insular like the United States is and you’ve been brainwashed since birth that “We’re Number One”, then I guess it’s just natural to presume, “Hey, NYC is America’s biggest city, so it must have the biggest public transportation system in the world, right”? Wrong.

Chinese blue collar and service sector workers and shopkeepers know where Iraq, France and Venezuela are. College educated Americans don’t. Welcome to the final throes of a dying empire.

More details about Jeff Brown's background.
In China, he has been a speaker at TEDx, the Bookworm and Capital M Literary Festivals, the Hutong, as well as being featured in an 18-part series of interviews on Radio Beijing AM774, with former BBC journalist, Bruce Connolly. He has guest lectured at the Beijing Academy of Social Sciences and various international schools and universities.

JEFF BROWN—This is typical of the attitude in America, which is sadly provincial and imperial. The baseball world series only has one Canadian team, Toronto, with all the others found in the United States. Yet, in the World Baseball Championship, Japan and Dominican Republic (two times) kicked Uncle Sam’s butt (https://www.cbssports.com/mlb/news/usa-vs-puerto-rico-wbc-championship-game-final-score-highlights-results-u-s-wins-first-ever-world-baseball-classic-in-blowout/).

Why is the far-right benefiting from the crisis of capitalism?