Home AMERICAN STUDIES All in the family: New York Times, Matt Damon, and Russel Crowe colluded over 10 years ago to squash Weinstein story

All in the family: New York Times, Matt Damon, and Russel Crowe colluded over 10 years ago to squash Weinstein story

by ALEX CHRISTOFOROU, THE DURAN

The liberal left New York Times knew what Harvey Weinstein was up to.

Hollywood golden boys, Matt Damon and Russel Crowe, appeared to have known what Harvey Weinstein was up to.

The liberal left media machine thought nothing of it, and decided to silence a story from Sharon Waxman that would have spared many young women from being subjected to Weinstein’s sexual power trips.

The New York Times had the story all the way back in 2004 and squashed it after Weinstein himself appeared at the NYT headquarters and muscled the paper into silence.

Sharon Waxman is the founder of The Wrap and a former New York Times reporter. She said she “gagged” when she read Jim Rutenberg’s sanctimonious piece on Saturday about the “media enablers” who kept this story from the public for decades.

Waxman wrote about having the Weinstein scoop when she was a new reporter at the New York Times back in 2004 but after Weinstein, Matt Damon and Russel Crowe pressured her to stop her hit piece, the story was gutted.

Zerohedge reports that Sharon Waxman, the founding editor of The Wrap and formerly an entertainment industry reporter at the Times, revealed in a blog post published Sunday that she had reported out a similar story back in 2004, only for it to be quashed by top editors at the paper, who, instead of encouraging her to pursue the story, questioned its value and relevance after Weinstein had reportedly made a personal appeal demanding that it not be run.

Waxman applauded the two reporters who broke the story, saying she knows how difficult reporting on powerful industry figures like Weinstein can be. But she could only scoff at a column written by Times’ media columnist Jim Rutenberg blasting Weinstein’s “media enablers”, who had reportedly turned a blind eye to his problematic behavior for decades. After all, she said, when it comes to keeping stories about Weinstein’s disturbing behavior from seeing the light of day, the Times was as complicit as anyone.

I applaud The New York Times and writers Jodi Kantor and Megan Twohey for getting the story in print. I’m sure it was a long and difficult road.

But I simply gagged when I read Jim Rutenberg’s sanctimonious piece on Saturday about the “media enablers” who kept this story from the public for decades.

“Until now,” he puffed, “no journalistic outfit had been able, or perhaps willing, to nail the details and hit publish.”

That’s right, Jim. No one — including The New York Times.

I traveled to Rome and tracked down the man who held the plum position of running Miramax Italy. According to multiple accounts, he had no film experience and his real job was to take care of Weinstein’s women needs, among other things.

As head of Miramax Italy in 2003 and 2004, Fabrizio Lombardo was paid $400,000 for less than a year of employment. He was on the payroll of Miramax and thus the Walt Disney Company, which had bought the indie studio in 1993.

I had people on the record telling me Lombardo knew nothing about film, and others citing evenings he organized with Russian escorts.

At the time, he denied that he was on the payroll to help Weinstein with favors. From the story: “Reached in Italy, Mr. Lombardo declined to comment on the circumstances of his leaving Miramax or Ricucci, saying they were legal matters being handled by lawyers. ‘I am very proud of what we achieved at Miramax here in Italy,’ he said of his work for the film company. ‘It cannot be that they hired me because I’m a friend.’”

Zerohedge notes that Waxman shared how she had convinced one of Weinstein’s victims to overcome her fears about violating an NDA to discuss her history with Weinstein.

“I also tracked down a woman in London who had been paid off after an unwanted sexual encounter with Weinstein. She was terrified to speak because of her non-disclosure agreement, but at least we had evidence of a pay-off.”

But despite Waxman’s best efforts, the story about Weinstein that she had reported never ran; instead, allegations of sexual harassment were removed from the piece, which was eventually buried in the culture section, after Weinstein launched a wide-ranging campaign to pressure the paper’s editors and owners – a campaign that involved personalized phone calls from celebrities like Matt Damon, who vouched for Weinstein’s character.

Damon and Crowe’s intervention into the NYT’s editorial process was not the only violation of journalistic ethics, as Waxman reveals that Weinstein was allowed to visit the New York Times newsroom to make his appeal…

I was told at the time that Weinstein had visited the newsroom in person to make his displeasure known. I knew he was a major advertiser in the Times, and that he was a powerful person overall.

But I had the facts, and this was the Times. Right?

Wrong. The story was stripped of any reference to sexual favors or coercion and buried on the inside of the Culture section, an obscure story about Miramax firing an Italian executive. Who cared?

The Times’ then-culture editor Jon Landman, now an editor-at-large for Bloomberg, thought the story was unimportant, asking me why it mattered.

Eight years after Waxman left the Times, the shifting cultural climate created the conditions for Weinstein to be deposed, as rumors circulated that his brother may have been behind the Times story.

Also, with the New Yorker reportedly researching its own Weinstein expose, the Times was effectively forced to act lest it miss out on one of the biggest entertainment industry scoops of the year.

However, the Times isn’t the only media outlet that caved to pressure Weinstein. As Page Six reported Sunday, New York Magazine fumbled its own Weinstein exposed after Weinstein reportedly had the story killed.

Even after news broke, Saturday Night Live – which has made countless cheap jokes about allegations of sexual harassment pertaining to President Donald Trump – was conspicuously mute about Weinstein.

Unsurprisingly, journalists blasted Waxman for her column, questioning why she didn’t publish the story herself after founding the Wrap in 2009. Waxman clarified that five years had passed, and many of her original sources had disappeared. Furthermore, she was preoccupied building and running her own media business – an endeavor that soaked up all of her free time, and then some.

If nothing else, Waxman’s disclosure is a valuable primer in influence peddling by powerful figures. More importantly. It’s also an important reminder that, when the collective decision was made by a cohort of powerful media interests to turn a blind eye to Weinstein’s misdeed, the Times was just as complicit as its peers. 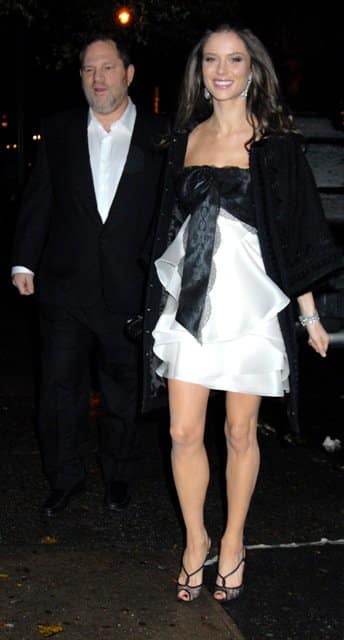 Editor's Note: The impolite question now is what will fashionista Georgina Chapman do in the wake of all these revelations.

About the Author
The author is a senior editor with The Duran.
Think!

ALEX CHRISTOFOROU—Eight years after Waxman left the Times, the shifting cultural climate created the conditions for Weinstein to be deposed, as rumors circulated that his brother may have been behind the Times story. Also, with the New Yorker reportedly researching its own Weinstein expose, the Times was effectively forced to act lest it miss out on one of the biggest entertainment industry scoops of the year.

Nobel Prize in Medicine awarded for discoveries on the circadian rhythm

Someone has finally wiped the smirk off his face…

But I do wonder why Hugh Heffner, of the same ilk, was praised in so many obituaries…