THE GREATEST INDONESIAN PAINTER AND ‘PRAYING TO THE PIG’ 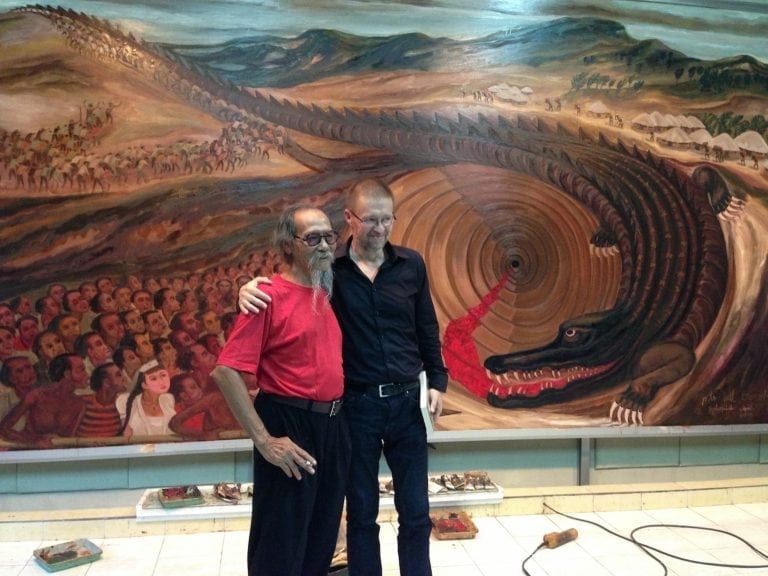 Djokopekik (who uses only one name, as is common in Java) could easily be described as the greatest living Indonesian painter. He is something of an anomaly in his country, where vulgar pop art, pop music and almost absolute submission to Western pro-market dogmas, religious rituals, and feudal family structures, are confining this vast archipelago into a tight straightjacket.

Djokopekik is a Communist, while Communism is banned in Indonesia. He is an atheist in a country where, according to some counts, around 99% of the population claims that ‘religions play an important role in their lives’. He is Cuban or more precisely, a Sukarno-style patriot, and simultaneously an internationalist. His main enemy is Western imperialism, and he makes sure to demonstrate it clearly, using his art.

When several years ago, my good friend George Burchett, an Australian artist who was born and now lives in Hanoi, Vietnam (his father, Wilfred Burchett, was perhaps the greatest English-speaking journalist of the 20th century, who at one point was declared “an enemy of the Australian people” by his government), had visited with Djokopekik’s house and studio with me outside the ancient Javanese city of Jogjakarta, he explained after seeing his work:

“This man is simply brilliant! He is a true people’s artist! His style is his own, but he is also like some powerful fusion of Picasso and Diego Rivera!”

Djokopekik felt flattered when I told him, but only for a few seconds. Soon he protested, half-jokingly: 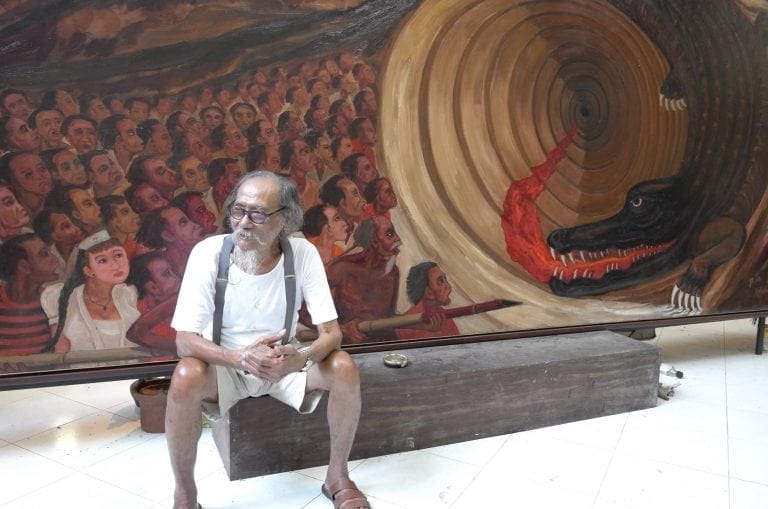 Djokopekik is always on the side of ‘small people’, but he is not at all sentimental or ‘unrealistic’ about them. He has no illusions about his countrymen, about their pragmatic and often cynical collaboration with the system, about their lack of higher aspiration and servility. “People here are thoroughly brainwashed and only obedient to evil things,” he said once when we were working together on my film about post-1965 Indonesia (“Terlena – Breaking of a Nation”). Then he laughed, cheekily: “They are like buffalos!”

On his tremendous canvases, poor victims are grinning, dancing and celebrating while capitalism, shameless elites and foreign interests are busy robbing them.

The world of Djokopekik is often brutal; it is grotesque and hyperbolic, but even when the artist exposes the naked idiocy into which his nation has been submerged, there is always a great dose of compassion and humanism.

The people he paints often lack all human features. Some look like monkeys. Others, particularly the corrupt officials, appear like silkworms. The symbol of ‘Orde Baru’ (Suharto’s pro-Western ‘New Order’) is portrayed as a huge and repulsive swine. And Western imperialism: it is just an enormous crocodile that eats everything that stands in its way.

In his latest work of art, Djokopekik uses two rhinos. The painting is called “Indonesian Circus”. “Why rhinos?” He replies without hesitation:

“Because these big mighty animals are actually easy to manipulate. They can be forced to do just about anything.”

His new canvas is cynical and brutal, but it is also somehow extremely realistic. 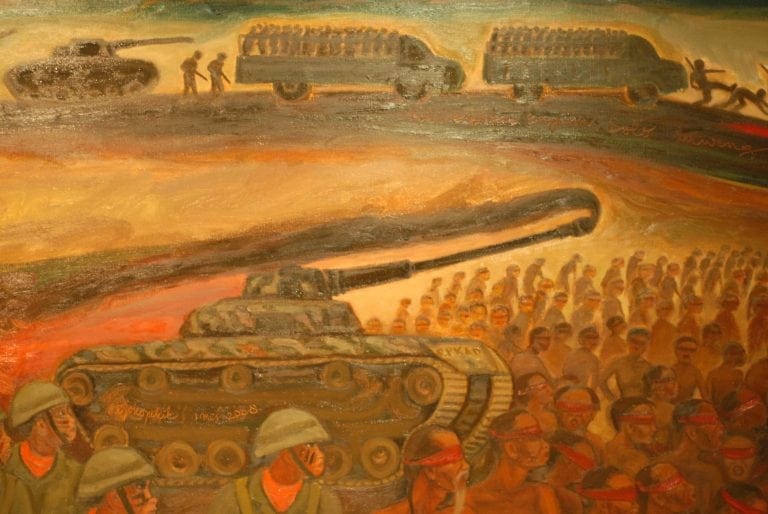 Fragment of Djokopekik work about 1965 coup.

I walk through his studio and reconnect with his iconic paintings: there is a woman ‘given’ to an old man as a wife, a young girl being indoctrinated by her father; there are corrupt government officials eating everything around them, and there are the horrors of the US-sponsored 1965 military coup.

This time we met on the 52nd anniversary of the massacres. I flew to Yogyakarta directly from Jakarta, after witnessing huge anti-Communist demonstrations by hardcore Islamists, taking place in front of the Parliament.

I ask Djokopekik about his thoughts on what was happening in the capital.

“Islamists are constantly spreading fear; fear of Communism, of already totally destroyed and banned Communist Party of Indonesia (PKI). They do it, so people forget, don’t think about any other issues. This way the Westerners could continue colonizing Indonesia. So everything could remain as before: capitalism, neo-colonialism... As during the Dutch era, or after the 1965 coup...”

And people do not know, they do not understand, or do not want to understand:

“Poor people, they just want to eat ‘tempe’ (local food made of soy), which used to be the cheapest dish in this part of Indonesia, at least in the past. Now it is expensive, because basic products are imported from the United States. But instead of protesting, people are told to fear PKI!”

After the coup in 1965, Djokopekik was imprisoned. And after being released from prison, he remained on the watch list, and he is being monitored to this day. For decades, he was not allowed to travel abroad, to speak publicly or exhibiting.

His most explosive works of art were already bought by the ‘collectors’, and then disappeared from the eyes of the public.

He is disliked by the elites, by the military and by many religious cadres. 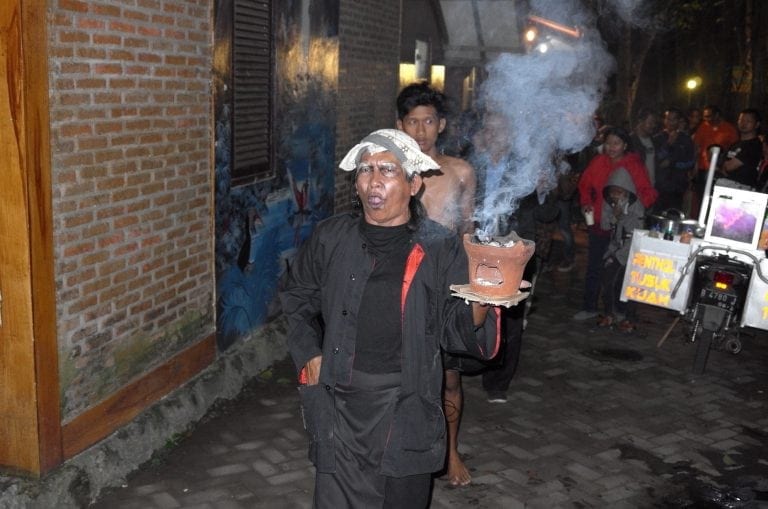 “Religions in Indonesia are used to fuel conflicts. There is no religious tolerance in this country. During the Sukarno era, religions were actually not powerful at all; Indonesia was a secular state. In those years, it was absolutely acceptable if people did not believe in God. Now, those who do not believe are labeled as the PKI, and to be PKI is illegal!”

“Bung Karno had several pillars on which he was trying to construct the society. Political sovereignty. Standing on our own feet economically. Culturally, to have our own dignity and identity! And now? Now this country has absolutely nothing!”

‘Djo’ is standing in front of his huge painting depicting a disgusting crocodile. The crocodile is literally devouring Papua. And the Papuan people are still somehow resisting, with spears... It is clearly a lost fight, but a fight it is, nevertheless.

The great artist is soon ‘jumping’ to another island. He speaks angrily about Kalimantan (the Indonesian part of Borneo):

“All over the place, there is illegal mining and devastation of the land... People understand nothing... If they die, they die... If the companies put toxins into the water or earth, they don’t care. There is also coal there. Multi-national companies, but also common people, are logging everything out. Some are now very rich. They only take, and give nothing back to the island. If they become super rich, they just buy private airplanes... That’s all!”

Once he painted a powerful canvas, depicting the terrible plight of Borneo. The symbol of destruction was a mighty and damaging tractor, which was ruining everything in sight.

I want to see that work. I want to film it for my documentary on Borneo. I ask. But Djokopekik explains:

“I don’t have it, anymore. Someone came and bought it... someone from Borneo itself... Now I don’t even know where it is.” 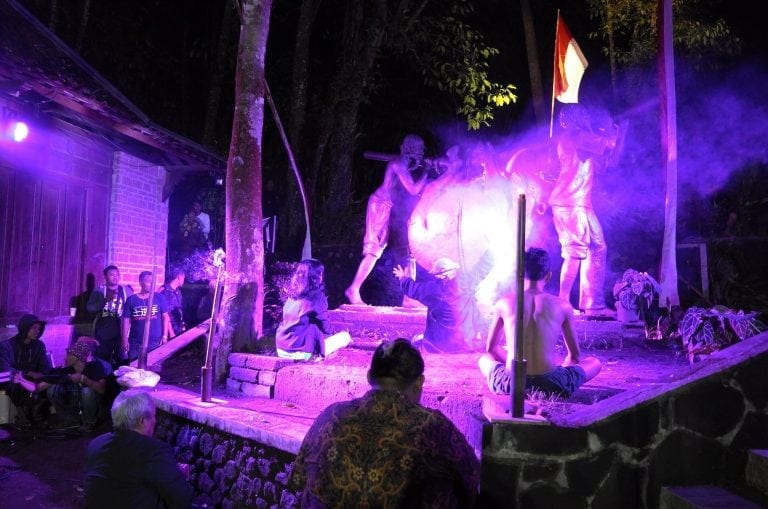 Praying to the pig with Indonesian flag behind.

Djokopekik is 80 years old, he is diabetic, often tired, but he never gives up. He fights, struggles, and pushes the boundaries with his art. When his sugar shoots over 600, he injects insulin, when it drops to 70, he eats raw sugar. He doesn’t care. He still drinks beer and wine, smokes his clove cigarettes, one after another, and he eats everything that he desires.

He is a Communist in a country where only capitalism and extreme consumerism are respected, and where Communism is out rightly banned. He is an atheist in a nation where almost everybody practices religions. He is a true patriot in Indonesia, which was totally sold out to the West by its generals, ‘intellectuals’ and businesspeople.

His is a lonely but powerful voice of reason and hope. His is as powerful a voice as that of Pramoedya Ananta Toer. 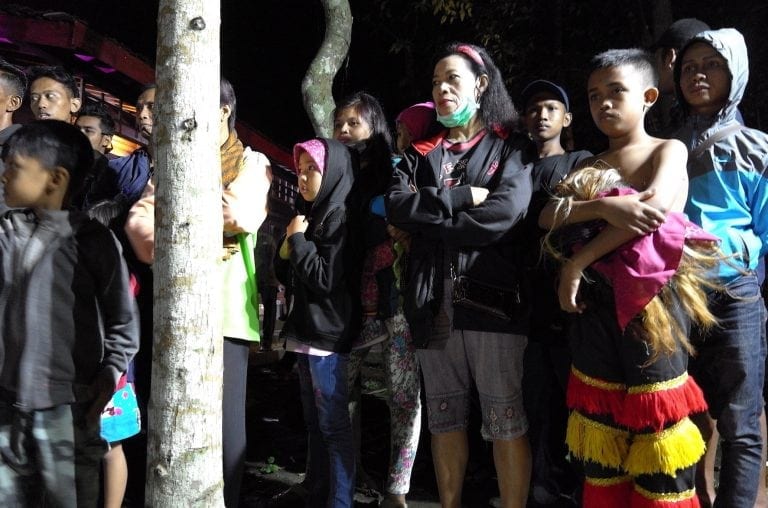 On October 1st, 2017, in a deep village of Karang Klethak, north of Yogyakarta, Djokopekik triggered a huge cultural event, a real ‘people’s event’, such that was common in Indonesia many decades ago. There were traditional Javanese actors and musicians performing on several stages.

Although it was not defined as such, the event was commemorating the 1965 coup. And Djokopekik wrote the story.

There was a swine, a huge, repulsive swine, representing the habits of Suharto’s regime. There was a swine-keeper, making animalistic sounds. And there were ‘people’ who came to pray to the Swine.

“The idea is that people in this country always come to pray, to beg – they were taught to admire everything that is stronger than them, and to also admire what the Swine represents,” explained Djokopekik. “In Indonesia, the only way forward is to eradicate the swine’s characteristics from our own selves.”

The great artist of the intellectually devastated Southeast Asia is standing alone, as it often appears. He has faced with scorn and determination all those horrible past years, during which Western imperialism reduced his country to one of the most servile, devastated and indoctrinated parts of the world.

He is facing, defiantly, all those who sold the ideals of Indonesian independence and socialism to the colonizers and multi-national companies. Those who betrayed, committed treason are exposed and attacked by him. A great Czech poet František Halas, once called such treasonous individuals expressively “pigs of the markets” (Prasata kšeftů). Djokopekik calls them simply pigs: Small pigs that are serving one huge Swine, that of Suharto’s dictatorship and of its lackeys who are, to this day, controlling the country.

Editor's Note: Swine are just innocent animals, and any investment of their nature with evil characteristics is simply an instance of artistic metaphor. Pigs, in fact, as a mainstay animal of factory farms, are a prominent species victimised to the tune of billions of animals annually by global capitalism. 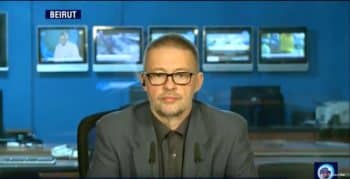 Andre Vltchek is a philosopher, novelist, filmmaker and investigative journalist. He has covered wars and conflicts in dozens of countries. Three of his latest books are revolutionary novel “Aurora” and two bestselling works of political non-fiction: “Exposing Lies Of The Empire” and “Fighting Against Western Imperialism”. View his other books here. Andre is making films for teleSUR and Al-Mayadeen. Watch Rwanda Gambit, his groundbreaking documentary about Rwanda and DRCongo. After having lived in Latin America, Africa and Oceania, Vltchek presently resides in East Asia and the Middle East, and continues to work around the world. He can be reached through his website and his Twitter.

ANDRE VLTCHEK—“Religions in Indonesia are used to fuel conflicts. There is no religious tolerance in this country. During the Sukarno era, religions were actually not powerful at all; Indonesia was a secular state. In those years, it was absolutely acceptable if people did not believe in God. Now, those who do not believe are labeled as the PKI, and to be PKI is illegal!”

The Rifle on the Wall: A Left Argument for Gun Rights (Reprise)