Home ABOMINATIONS UNREAL—So It Turns Out Black Activists Were Tricked By Putin Into Thinking There’s A Problem. *Cough*

UNREAL—So It Turns Out Black Activists Were Tricked By Putin Into Thinking There’s A Problem. *Cough*

The Daily Kos, which these days seems to spend most of its energy stumping for the new cold war and promoting blog pieces with titles like “Putin crony Jill Stein”, has got some fantastic news for black activists all over America. You know how you guys have been laboring under the impression that you live in a country built upon slavery and kleptocratic Jim Crow laws, resulting in institutional racism and oppressive generational poverty which plague you to this day?

Well, it turns out you imagined the whole thing: you were actually tricked into thinking those thoughts by Vladimir Putin in order to influence the 2016 election. Turns out your activism hasn’t been needed after all! Yay!

Don’t worry though: the Daily Kos hastens to inform us that it wasn’t your fault. You organized events protesting police brutality and systemic racism on behalf of the Kremlin “unknowingly”.

Named after the 1944 movie wherein the antagonist slowly tries to convince his new wife that she’s going insane, gaslighting is a textbook tactic utilized by abusers all over the world in which the victim is convinced over time that they are unable to trust their own interpretation of reality due to some mental deficiency. If an abuser can convince his girlfriend that she is misremembering and misinterpreting events, for example, he can get away with doing anything he wants to her and she’ll wind up not only staying, but apologizing for things she doesn’t remember ever doing.

This is exactly what we’re seeing in the recent spate of “Russia tricked you into thinking there’s a problem” propaganda campaigns targeted at the black community. These include the Daily Kos report that “Russian troll farms also contacted black activists in order to convince them to organize events that they thought would further expand political strife, racial division, and controversy,” as well as CNN’s jaw-droppingly moronic claim that Black Lives Matter protests were organized by Kremlin agents via Pokemon Go. We’re seeing more and more reports like this, all completely ignoring the extremely obvious fact that black activists have a long list of perfectly good reasons to be holding protests right now, none of which require any Kremlin-sponsored subversion.

I’ve said it before and I’ll say it again: if spreading information about an increasingly militarized police force killing unarmed black men is all it would take for Russia to sway a US election, then the problem isn’t Russia.

And what’s really creepy is that it worked on some people. Ever since the gaslighting campaign began people have been telling me I’ve either been brainwashed by Russian propaganda or am a Russian propagandist myself; it’s become such a ubiquitous narrative within the liberal echo chamber that establishment Democrats actually think it’s a normal and acceptable accusation to bring into a debate with someone who disagrees with them.

We can expect to see the same thing happening with black activism now: a bunch of well-meaning liberals concern trolling that faction of the anti-establishment left about possible Russian infiltration. Black leftists (who, contrary to an anti-Sanders narrative which was concocted two years ago, actually make up a significant and influential part of the far left in the US) will have their influence over mainstream America significantly weakened by this pernicious psyop. 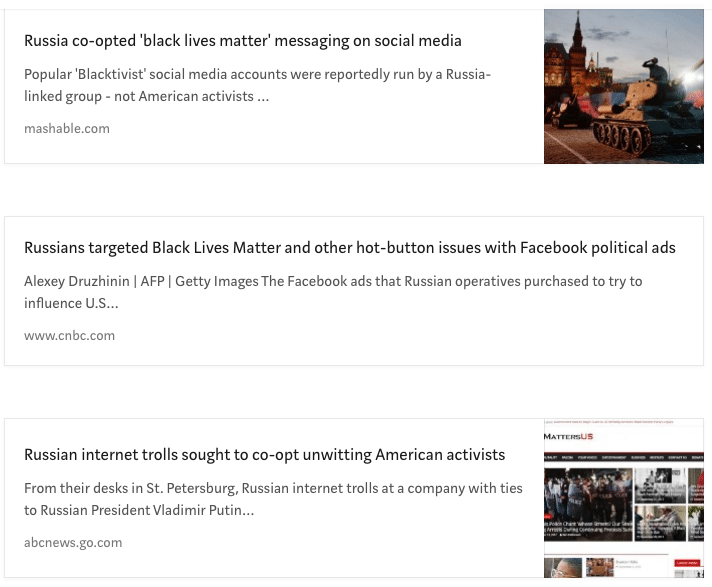 These manipulations are really, really gross, but they’re interesting in that they have the unintended effect of splicing the American partisan echo chambers in unusual ways. The Trump camp has a lot invested in pretending that institutional racism doesn’t exist and that there is no racial disparity in police shootings, but they’re highly skeptical of the establishment Russia narrative. Democrats will rage at you for months if you say there’s no evidence for Russiagate beyond the authoritative say-so of a few pundits and the professional liars in the US intelligence community, but they’ll get squeamish when people point out how disgusting this latest “Putin caused America’s race problem” manipulation is. As the establishment gets more desperate, their flailings are beginning to breach party lines, and the dissonance this causes is potentially useful for shaking people awake to what’s really happening. I seem to have acquired an ideologically diverse audience, so the comments on this piece should be interesting.

These manipulations wouldn’t be used if they weren’t expected to work. It’s up to us to keep pointing them out as they come up, but as we discussed last time, eventually we’re going to have to evolve to a point where we become immune to oligarchic propaganda. In the meantime, the Daily Kos can fucking blow me.

Hey you, thanks for reading! My work is entirely reader-funded so if you enjoyed this piece please consider sharing it around, liking me on Facebook, following me on Twitter, and maybe throwing some money into my hat on Patreon or Paypal.

CAITLIN JOHNSTONE—What’s really creepy is that it worked on some people. Ever since the gaslighting campaign began people have been telling me I’ve either been brainwashed by Russian propaganda or am a Russian propagandist myself; it’s become such a ubiquitous narrative within the liberal echo chamber that establishment Democrats actually think it’s a normal and acceptable accusation to bring into a debate with someone who disagrees with them

The Genius of Leonardo da Vinci

Dying for the Empire is Not Heroic