The Spanish Senate formally voted 214-47 on Friday to authorize the implementation of Article 155 of the Spanish Constitution, suspending parliamentary rule in Catalonia. It handed Spanish Prime Minister Mariano Rajoy full powers to suspend the Catalan regional government, proceed with punitive measures outlined in Rajoy’s October 21 speech, and impose an unelected Catalan government answerable only to Madrid. 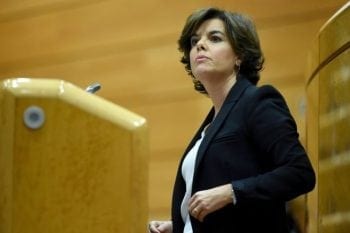 Soraya Saenz de Santamaría: “Madrid’s enforcer for Catalonia”. Says the BBC, “The woman appointed by Madrid to restore Spanish rule in Catalonia is seen as a capable politician but one lacking in charisma.”

As Article 155 was being debated in the Senate, where Rajoy’s right-wing Popular Party (PP) has an absolute majority, the Catalan parliament anticipated the outcome of the debate and voted to declare independence. Thousands of protesters surrounded Catalan government buildings in Barcelona Friday night amid calls to defend the newly-declared republic.

Yesterday’s events mark a historic collapse of democratic forms of rule in Western Europe and a return to authoritarianism with far-reaching implications. The Spanish political set-up created 39 years ago, in the so-called Transition from the 1939-1978 fascist regime established by General Francisco Franco, has burst asunder. With the full support of the European Union and Washington, Madrid aims to police 7 million Catalans through unilateral decrees, backed by the police and army, while holding in reserve the invocation of Article 116 to impose a nationwide state of emergency.

The defense of the basic interests of the working class requires determined political opposition to repression in Catalonia. The danger of a bloodbath is looming, as Madrid moves to enforce the diktat of the European financial aristocracy on the workers in Catalonia and across Spain.

EU Council President Donald Tusk reiterated the European powers’ support for the implementation of Article 155 yesterday, writing on Twitter: “For [the] EU nothing changes. Spain remains our only interlocutor.” Tusk cynically added that he hoped Madrid would use “force of argument, not argument of force.”

In a speech urging the Senate to adopt Article 155, Rajoy declared that now “there is no alternative.” He continued: “The only thing that can and therefore must be done in such a situation is to use the law to enforce the law.” He said his government had four goals: to “return to legality” in Catalonia, “win back the people’s confidence,” “maintain the high levels of economic growth and job creation of recent times,” and “organize elections in a situation of institutional normality.”

“What we must protect the Catalans from is not Spanish imperialism, as they claim, but from a minority that in an intolerant fashion is acting as if it owned Catalonia,” Rajoy declared.

Responsibility for the crisis lies squarely with Madrid, which, after its brutal crackdown on the October 1 referendum, has consistently sought to inflame the conflict. On October 19, Catalan President Carles Puigdemont confirmed that he had suspended moves toward independence and appealed to Madrid for dialogue. With its unilateral rejection of this appeal, its arbitrary imprisonment of Catalan nationalist politicians Jordi Sanchez and Jordi Cuixart, and its moves to invoke Article 155, Madrid forced the Catalan nationalists in Barcelona on the path to a declaration of independence. 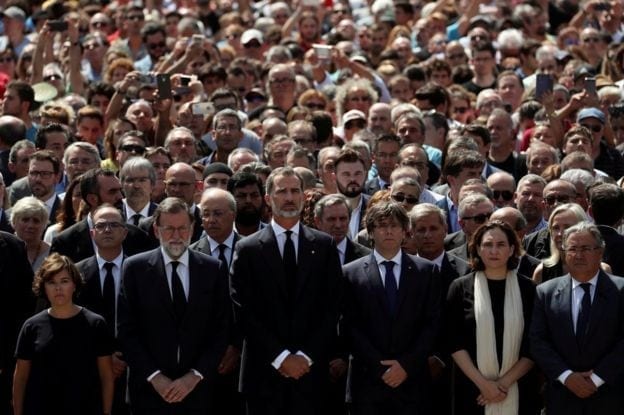 The Madrid Mob—Saenz (L) standing next to Rajoy and the King (tallest in the front row), in a crowd representing prominent politicians and supporters backing Madrid’s tough response to Catalonia.

Rajoy’s calls for “legality,” “elections” and “institutional normality” are a cynical ruse, presenting the drive to dictatorship as the defense of democracy and constitutional rule. Madrid is well aware that it can impose its agenda only by means of state terror and repression. According to Rajoy’s October 21 speech, he aims to seize control of the Catalan budget, government, education system, police force and public media.

These measures will provoke deep opposition among millions of people, and Madrid is preparing to forcibly repress it. The paramilitary Guardia Civil, the Arapiles motorized infantry regiment and other army units stationed in neighboring regions are all preparing to intervene in Catalonia.

At a press conference Friday night, after a meeting of his ministerial cabinet to discuss the Senate vote, Rajoy announced the suspension of the Catalan government and the holding of elections on December 21. Madrid also confirmed that it would bring charges of “rebellion,” a crime punishable by up to 30 years in prison, against current Catalan government and parliament members.

These announcements expose Rajoy’s claim that Madrid will organize elections in Catalonia as an Orwellian fraud. If his plans go forward, most of the Catalan political opposition to the PP will be in prison as these elections are held. Moreover, whoever was elected on December 21 would be seated in a legislature stripped of all power to legislate or name a regional government. It could only impotently look on as Madrid imposed its will.

The key concern of Madrid and the new Catalan government will be to continue imposing harsh austerity measures against the workers. Yesterday, the EU sent Madrid a letter demanding further cuts to Spanish public spending to reach a public deficit target of 2.2 percent of gross domestic product. Economy Minister Luis de Guindos and Treasury Minister Cristobal Montoro replied with a statement that they would take “all necessary measures to guarantee the fulfillment of budgetary stability objectives.”

The turn to authoritarian rule in Spain is an urgent warning to the working class. Decades of deep austerity, imperialist war and the promotion of law-and-order measures across Europe since the Stalinist dissolution of the Soviet Union in 1991, and particularly since the 2008 Wall Street crash, have produced a mortal crisis of capitalist rule. With tens of millions of workers unemployed across Europe, the ruling class is aware of explosive social anger. Its response when it encounters opposition is a rapid resort to dictatorial measures.

The critical question today is the mobilization of workers in Catalonia, in Spain and across Europe in struggle against a return to authoritarian forms of rule. Workers must reject all attempts to justify a turn toward dictatorship and military repression of the population based on calls for the defense of Spanish territorial integrity. The only progressive way to establish the unity of the Iberian Peninsula and Europe as a whole is the mobilization of the working class in a revolutionary and internationalist struggle against dictatorship and war, and for socialism.

The struggle to mobilize the working class must be undertaken on the basis of complete independence from and opposition to the entire ruling establishment, including the trade union bureaucracies and the bourgeois parties claiming to be “left,” as well as the Catalan nationalist parties.

Forces such as the CCOO (Workers Commissions) trade union and Spain’s Podemos party are aligning themselves with Rajoy’s drive to dictatorship. Podemos General Secretary Pablo Iglesias responded to the Senate vote by tacitly backing Rajoy’s call for Catalan elections, saying only that these should be held “without repression.” Adopting a neutral position as Madrid prepares its repression, he said, “I believe there is a silent majority of Spaniards that is neither for unilateralism [i.e., the Catalan declaration of independence] nor for violence and repression.”

CCOO official Fernando Lezcano insisted that his union would discourage all acts of defiance of Madrid by workers. He warned, “We will not give a single instruction that could lead to civil disobedience or to public sector workers carrying out actions that could be punished.”

Throughout its conflict with Madrid, the Catalan nationalist movement has sought to cover up the class issues involved in the turn to dictatorship by the Spanish bourgeoisie, while seeking a deal with the European Union—the same EU that has imposed austerity measures throughout Europe.

About the Author
The authors are political analysts with wsws.org, a socialist publication.