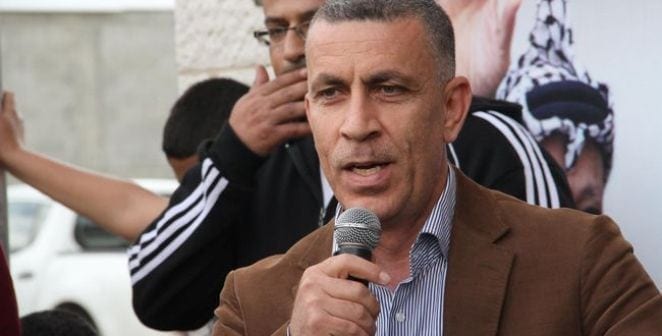 M[/su_dropcap]urad Shteiwi does not flinch as he watches a video of his son moments after an Israeli soldier shot him two years ago. The short clip shows Khalid Shteiwi who was 11 years old at the time. He is on the ground, trying to move away from the Israeli army as they continue to fire near him, but he cannot, because he has been shot in the leg. He slams his arms on the ground, as though the pain and fear are too much too handle. He is desperate to get away from the soldiers.

“I was confused and afraid as I had fallen on the ground and the soldiers were running toward me to arrest me,” Khalid later said from his hospital bed. “I was not expecting that somebody would come and get me, because of the intense fire.”

Eventually, a man picks Khalid up and carries him to safety, running away from the soldiers. It is a scene his father thinks about often.

“The hardest thing was not being able to do help Khalid,” says Shteiwi. He was only a few yards away at the time, “but it felt like my feet were nailed to the ground.”

Although Khalid was shot more than two years ago, his leg is still not right.

“His bone turned to sand. Now one leg is one 3 cm [1 inch] shorter than the other, and there will have to be more surgery,” Shteiwi says.

Murad Shteiwi and his family live in Kufr Qaddum, a small village located in the northern half of the Israeli-occupied West Bank. He is the head of the Kufr Qaddum Popular Committee and a chief protest organizer. His village is surrounded by Israeli settlements, for whose benefit much of Kufr Qaddum’s land has been confiscated. Shteiwi told the Electronic Intifada in 2011 that he estimated 58 percent of the village’s land had been appropriated by Kedumim, the closest settlement.

The main road in Kufr Qaddum leads south to Road 55, the principal artery between the cities of Nablus and Qalqilya. In 2003 the Israeli authorities closed the road because it passed between Kedumim and a neighborhood to its north. This past summer the army informed Shteiwi that the road would soon be opened, but thus far there has been no indication that it will follow through on this promise.

The closure of the road 14 years ago served to sever the village from Nablus, the economic and cultural hub of the region. A trip to Nablus, which formerly took ten minutes by car, now necessitated a drive of 40 minutes along a bumpy road on which vehicles sometimes become stuck when it rains. The consequences of the road closure, along with the increasingly harsh Israeli security measures instituted since the outbreak of the Second Intifada, have been predictably disastrous for the economy of Kufr Qaddum. A 2007 report prepared by the Land Research Center, a Palestinian NGO, reveals that after 2002, more than 75 percent of the population of the village became unemployed, while nearly half the residents are now dependent on foreign aid for their survival.

The closure of the road has affected the agricultural sector most dramatically, because the road lies between the village and its farmlands, making it difficult for farmers to reach their lands.

“The army only allows the farmers to use their lands twice a year. Once for planting and once for the harvest,” Shteiwi says. “But they don’t give them enough time for the harvest.”

The army told the villagers shortly after it was closed that the road would soon be reopened, but when that failed to occur, they took their grievances to court. After five years of waiting, they found out in 2010 that they would be allowed to, once again, use the road. The army decided however, citing security reasons, that this would not be allowed to take place. Finally, on July 1 of 2011, the villagers took matters into their own hands.

“We began to demonstrate peacefully to try to have the road opened again,” says Shteiwi.

The weekly protests begin after the noon prayer on Fridays, when residents, accompanied by small numbers of activists, walk along the main road from the center of the village towards Kedumim, chanting demands for the opening of the road and the end of the Occupation. Heavily armed Israeli soldiers, supported by military jeeps, are deployed along the road, sometimes inside the village itself, and sometimes farther along the road. On some occasions, the village’s young men will drop old tires in the middle of the road, lighting them on fire.

“We always hope the wind blows the smoke towards the settlement,” an old man told me in 2014. “At least the settlers will know that we are still here.”

Sometimes clashes erupt between the two sides. The young men throw stones, and the army responds, employing all manner of weapons.

In March of 2012, the army unleashed an attack dog, who attacked Shteiwi’s nephew Ahmed, in a video released by B’Tselem that can be seen here.

“The dog just wouldn’t let go of his arm. There was nothing we could do,” says Shteiwi. “Eventually they brought an ambulance, but it wasn’t for Ahmed. It was for the dog.”

The most brutal weapon used by the Israelis at the demonstrations is live ammunition.

“Eighty-five victims have been shot above the waist,” says Shteiwi.

Shteiwi himself has been shot twice, and he has also been arrested on three occasions. He has spent a total of over nine months in prison and paid $7,000 [24,500 NIS] in fines. He believes soldiers have targeted him for special punishment because of his leadership role in the protests.

“One day they shot 43 teargas canisters at my house,” says Shteiwi.

On another occasion soldiers emptied an entire tank of skunk water—a substance so foul, that when it touches you, it makes “you want to rip your skin off”—into his living room.

It is important for Shteiwi that the protests remain peaceful.

“We cannot defeat the soldiers with weapons,” he says. “We only have our message.”

He is frustrated by those who ask why youths throw stones at the protests.

Shteiwi is not convinced that, despite claims to the contrary, the army has any intention of opening the road.

“They have said this before,” he says, “but they did not follow through on their promise. We will continue the protests.”

This article appeared previously in Mondoweiss, colleagues in bringing truth to a truth starved planet.

About the Author
Richard Hardigan is a university professor based in California. He is currently writing a book entitled “The Other Side of the Wall” based on his experience in the Occupied Territories. His website is http://richardhardigan123.wixsite.com/mysite. You can follow him on Twitter at @RichardHardigan.

RICHARD HARDIGAN—Shteiwi himself has been shot twice, and he has also been arrested on three occasions. He has spent a total of over nine months in prison and paid $7,000 [24,500 NIS] in fines. He believes soldiers have targeted him for special punishment because of his leadership role in the protests.

Israel Lobby is Slowly Being Dragged Into the Light

Megadeaths From America – Yemen Is the Worst Case Among Many