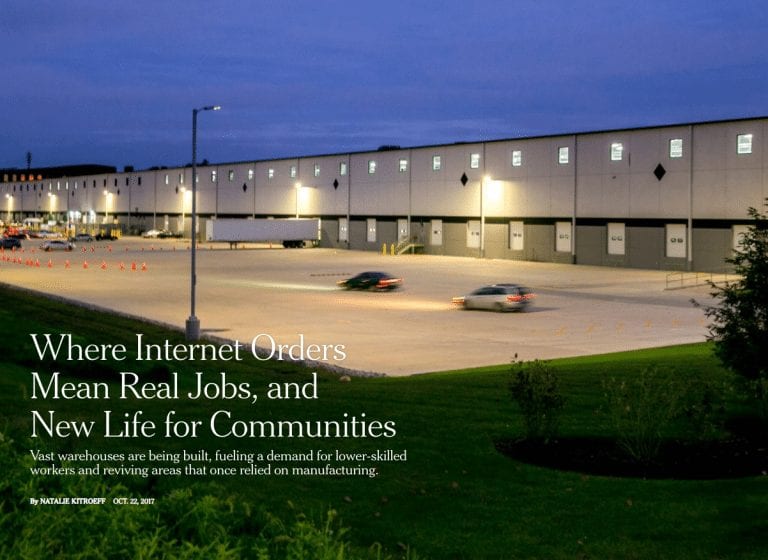 The New York Times (10/22/17) reports that “a constellation of vast warehouses” has “breathed new life into pockets of the country that had fallen economically behind.”

Times are tough in Middle America, but the New York Times (10/22/17) says there’s hope on the horizon—conveniently packaged in the economic boom of e-commerce. The paper’s reporting, unfortunately, avoids confronting the insecurity inherent in relying on retail conglomerates for long-term work.

Retail giants, the Times reported breathlessly in October, are reshaping the economic landscape in America and saving the working class:

Sellers like Zulily, Amazon and Walmart are competing to get goods to the buyer’s doorstep as quickly as possible, giving rise to a constellation of vast warehouses that have fueled a boom for workers without college degrees and breathed new life into pockets of the country that had fallen economically behind.

Using the city of Bethlehem, Pa., as the jumping-off point, the paper’s Natalie Kitroeff reported on the economic benefits that big-box retailers can bring to the community. Large chains are revitalizing the city’s decayed infrastructure, but questions on the meaning of the change weren’t raised by the Times. Rather, the entire project was treated uncritically as a boon for the community—using language that ranged from laudatory to exciting.

A revamped warehouse in Bethlehem feels “like home” to a worker (because her father had worked there when it was steel plant); “Amazon saw something promising in the city’s bones”; in fact, rural Pennsylvania is “a warehouse mecca.” And the explosion in warehouse reuse is far-reaching in its benevolence:

The boom in warehouses has created a seemingly endless appetite for stockers, pickers and packers, turning the town into a magnet for people in need of a second chance.

The Times wasn’t alone in its uncritical praise for conglomerates turning to Middle America for labor and warehouses. Just last month, FAIR (10/25/17) caught the Washington Post relying on unattributed Amazon press releases to tout the benefits of its owner’s company to communities. Forbes (9/15/17) said that “the Heartland has a lot to offer” to e-commerce companies coming to the Midwest. And Axios (10/23/17) headlined its summation of the aforementioned Times story “E-Commerce Warehouse Jobs Breathe Life Into the Rust Belt.”

But any benefits of big box companies in the Heartland could be temporary, as was pointed out by The Outline (8/10/17) in a piece published over the summer. The online magazine cautioned that even though the current e-commerce economic boom is real, the benefits could be fleeting:

The revival is welcome, but the new jobs are neither as well-paid nor as steady as steel jobs once were. It’s also unclear how long they will last.

Unfortunately, that measured view of the consequences of an evolving sector of the economy is hard to find when corporate media avoid mentioning the negatives. The Times did acknowledge that technology will inevitably reduce the amount of human labor needed to deliver goods to consumers—only to reassure, “But for now, humans are still needed, in ever-increasing numbers.” The article closes with the promise that Walmart’s warehouse, which doubled the 1,100 employees it started with this year, will have hired “hundreds more” by this time next year. 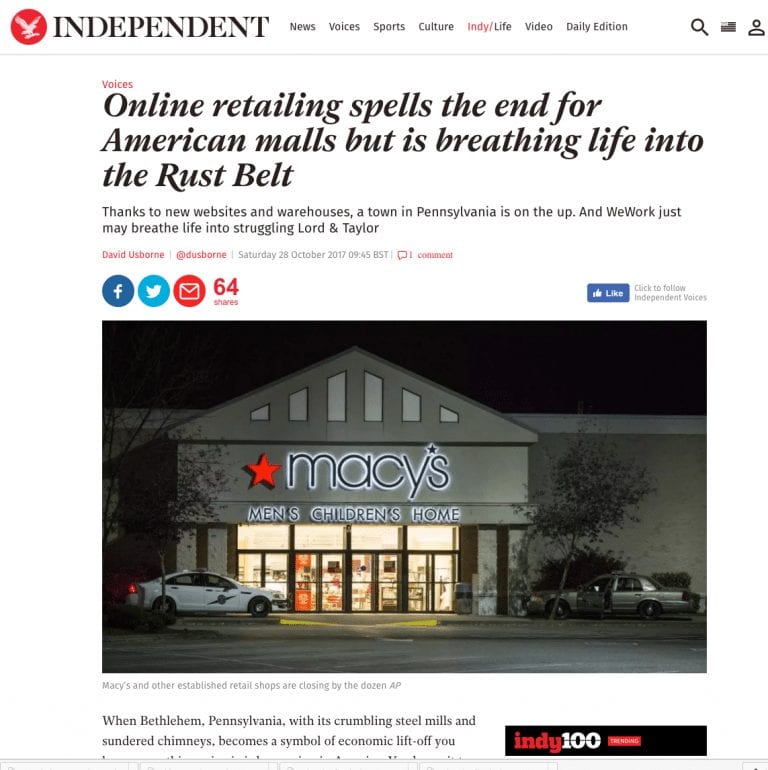 The Independent (10/28/17) declares that the Rust Belt is “stirring again, not because steel is back in vogue, but because online shopping has arrived.”

how online living—and shopping—has compounded the difficulties so many communities face keeping jobs nearby for the families that live in them.

“This narrative is more complicated than at first appears,” the British-based paper insisted:

And less gloomy. It isn’t just about the old giving way to the new…. Look more closely and the old models of doing business and the new ones are sometimes starting to mash together. They are colliding in ways that are producing new and unexpected energy.

The Independent found this “new and unexpected energy” in the same Bethlehem, Pennsylvania, warehouses that were the setting for the Times’ upbeat take. “Online Retailing Spells the End for American Malls but Is Breathing Life Into the Rust Belt,” was how the Independent headlined it.

If moving boxes in an online retailer’s warehouse—at a job that will likely be replaced by a robot in a few years—is the best unemployed factory workers have to look forward to, then critical media coverage, not Chamber of Commerce boosterism, is desperately needed.

EOIN HIGGINS—If moving boxes in an online retailer’s warehouse—at a job that will likely be replaced by a robot in a few years—is the best unemployed factory workers have to look forward to, then critical media coverage, not Chamber of Commerce boosterism, is desperately needed.