Uzbekistan – A Voice from Eurasia

HELP ENLIGHTEN YOUR FELLOWS. BE SURE TO PASS THIS ON. SURVIVAL DEPENDS ON IT.
Uzbekistan is a peaceful friendly country, smiling faces, many of them struggling to make a living, but still smiling. Uzbekistan is a double landlocked nation, meaning she is surrounded by other landlocked countries, i.e. Afghanistan, Tajikistan, Kyrgyzstan, Kazakhstan and Turkmenistan. 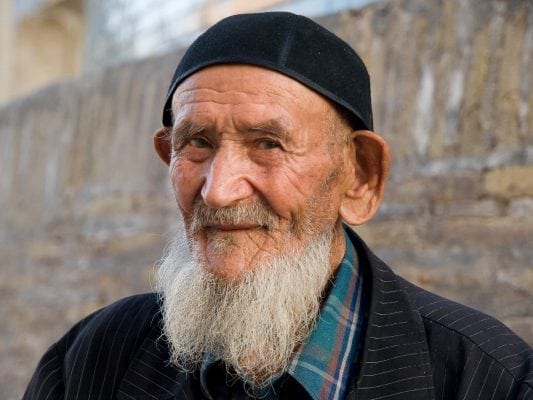 An older Uzbek, in Khiva, Uzbekistan. Uzbeks, about 32 million of them, are Turkic peoples. The country in Central Asia, is doubly landlocked and arid.

Landlocked countries have no access to the sea. They are economically more challenged than are those with access to the seas. Exports to and from distant destinations are more complicated and more expensive.

Since the collapse of the Soviet Union, Uzbeks are trying to find their bearings in defining and paying for their own social services, health, education, water and sanitation, as well as for a rapidly decaying infrastructure. But they are doing what they can, exporting labor to Russia and western Europe (receiving transfer payments); young people leaving their families behind, sending money home, coming back for a vacation, once, twice – then, many start new families in their host countries and leave their wives and children behind. A classic for Gastarbeiter, or guest workers, throughout the world.

But lately Uzbekistan, like other Central Asian countries, are experiencing a mini-boom – a boom thanks to the sanctions imposed on Russia by Washington and through extension by its European vassals. Her exports of vegetables, fruit, other agricultural and industrial goods to Russia are skyrocketing. Mr. Putin already said two years ago, the sanctions were the best thing that ever happened to Russia since the collapse of the Soviet Union. They forced Russia to develop their agriculture again and bring her defunct industrial apparatus with science and research up to cutting edge technology, at par or above that of the west. They have certainly succeeded and by association, the sanctions have benefited Uzbeks and other Central-Asians by improving their standards of living by supplying goods and services to Russia, while Russia’s capacity is growing stronger. Together with her Eurasian partners they are gradually achieving full self-reliance, independence from the blackmailing “sanctions” of the western economies.

There is also the Shanghai Cooperation Organization (SCO), of which most of Central Asia, plus Russia and China are members. The SCO is a huge block for trade, economic, defense, and strategic thinking, comprising half of the globe’s population and one third the world’s GDP. In short, the day of total decoupling from the western fraudulent dollar-euro system is clearly visible on the horizon. – All that thanks to abject, arrogant and inhuman behavior, beset by greed for power and monetary gains by the west. The west is constantly shooting itself in the foot. Soon it will have no more feet to walk on. Then it will shoot higher not realizing that the ricochets will eventually kill it. The west is committing willy-nilly suicide by greed for money and power.

Is that good? – Difficult to say. For many common people, lower middle-class and poor people, in Europe and elsewhere, it may mean at least temporary hardship, until the world recovers from two centuries-plus of western made wars, conflicts and oppression, claiming tens of millions of deaths and untold misery around the world. But recover we will – unless, yes unless – a Zion-western prompted nuclear madness against Iran, North Korea, Syria, or even Russia and China devastates us all. 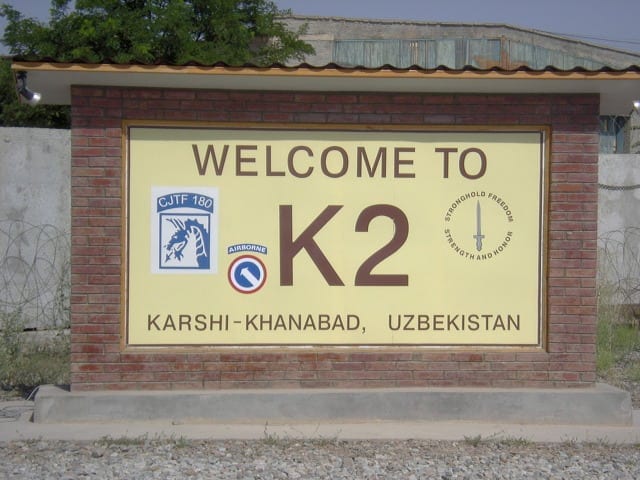 U.S. and NATO military assets were based at Karshi-Khanabad airbase (dubbed K2) for a period of approximately four years in support of NATO operations in Afghanistan. They departed the base in November of 2005. (Brian Kalman, Global Research)

This message comes from Ferghana, the capital of Uzbek’s Ferghana Province, embracing a vast, large, flat valley that stretches to the north-east into Tajikistan and Kyrgyzstan, a transit point of the old Silk Road. Today the Ferghana Valley is a fertile agricultural area, the home of many cotton growers and exporters to Russia and China – and other SCO countries. It is trade outside of the dollar dominion.

And of course, Uzbekistan like the rest of Eurasia is part of China’s President Xi’s NEW Silk Road project, the One Belt Initiative, or OBI, a multi-trillion-dollar endeavor of infrastructure, industry, science and technology development that is meant to eventually embrace all of Europe, Asia and even Africa.

OBI is to become a multi-pole of economic development outside of the current western dollar dominion, but its doors are open for any nation that dares to join and detach from the stranglehold of the Washington dominated military and financial power grip – a clear and present danger for Washington’s objective of full spectrum dominance. OBI is the future for economic growth and development, job creation, science, education, culture. Therefore, the East, where undoubtedly the future lays, has to be denigrated by any means the western mainstream presstitute has at its disposal – disparaging lies and slander, including constant accusations of human rights abuses.

OBI, a humane approach to prospering life in peace, has become the west’s new economic axis of evil that has to be defeated by any means. While western aggressors, the US, the ridiculously defunct NATO and its many vassal-proxies in Europe and the Middle East are on their last breath, they are seeking to pull the world with them into a nuclear abyss of total destruction. NATO is even prospecting for new clients in South America – a contract of collaboration with Columbia which may spread like brushfire throughout Latin America – their leaders are not careful. That is the zion-western thought process – its US or NOBODY; its profit über alles.

Uzbekistan being part of the New East, thus, has to be smeared, for example with human rights abuses. Western drip-by-steady-drip propaganda is such that it escapes common people’s perception and becomes reality. A friend, knowing of my stay in Uzbekistan, recently wrote to me, ‘how are human rights in Uzbekistan?’ – inferring that they are disastrous. They are certainly not.

The western populace lives in a bubble in which their values are enshrined as the truth – all the wars and conflicts started by the west, the so called war on terror, based on a ‘false flag’ 9/11, is justifying any human rights abuse, wars, CIA assassinations, drone killings, financial strangulations by ‘sanctions’ abject torture, raping and slaughtering entire countries, like the central African countries, for natural resources, rare earths used for the military-security industrial complex that needs an ever-mounting spiral of wars and conflicts for ever more and higher profits by an economy of death and destruction – which is what we have become in the west. ‘Fake news’ also makes Uzbekistan a country that allegedly supplies terrorists, like the recent downtown Manhattan sidewalk rampage, supposedly carried out by an Uzbek national.

Yet, hardly anybody in the west sees the context of western aggression, when they launch accusations of human rights abuse against Russia, China, Iran, Syria, Venezuela, Cuba, Uzbekistan – and the list goes on. It is beyond comprehension how blind our media have made us in the west – to the point that truth seeking media, like Russia Today (RT), Sputnik, TeleSur – are shunned, if not outright banned in the west, i.e. in the US of A and its European puppets and in some of the newly converted neoliberal Latin American countries.

Uzbekistan, China, Russia and the entire East is doing great as far as human rights are concerned – there is not even a shred of comparison with the abusive, murderous west.

About the Author
Peter Koenig is an economist and geopolitical analyst. He is also a former World Bank staff and worked extensively around the world in the fields of environment and water resources. He lectures at universities in the US, Europe and South America. He writes regularly for Global Research, ICH, RT, Sputnik, PressTV, The 4th Media (China), TeleSUR, The Vineyard of The Saker Blog, and other internet sites. He is the author of Implosion – An Economic Thriller about War, Environmental Destruction and Corporate Greed – fiction based on facts and on 30 years of World Bank experience around the globe. He is also a co-author of The World Order and Revolution! – Essays from the Resistance.

PETER KOENIG—Uzbekistan, China, Russia and the entire East is doing great as far as human rights are concerned – there is not even a shred of comparison with the abusive, murderous west.

Save Net Neutrality: In America it’s Groundhog Day every day.