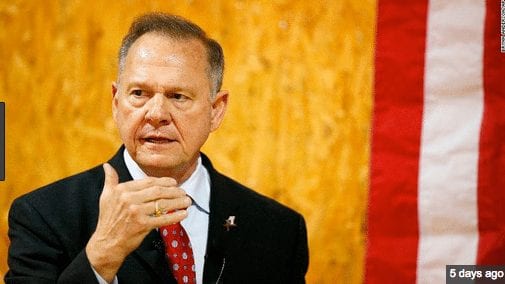 Unreconstructed scumbag Roy Moore: OK, he lost, but Alabama still produces this kind of human garbage. And Republicans are happy to embrace him. But that should not be read as endorsing the equally disgraceful Democrats, who specialise in treachery and the stab in the back. Criminals like Moore are at least upfront with their hatreds and betrayals. Intelligent people should drop the duopoly game and oppose both wings of the corporate oligarchy with equal revulsion.

It was the first time a Democrat won a US Senate election in Alabama since the election in 1992 of Richard Shelby, who subsequently became a Republican and remains today the state’s senior senator.

The vote count as of this writing was 49.9 percent for Jones to 48.4 percent for Moore, a narrow but comfortable margin. Despite the fact that state law triggers an automatic recount only if the margin of difference is 0.5 percent or below, Moore refused to concede the election following Jones’ victory speech and indicated that he would contest the outcome.

The Democratic victory was the result of a higher-than expected turnout of more than 40 percent, with turnout particularly high, compared to previous elections, among African Americans and young people. Voter turnout was especially heavy in the major urban centers of Birmingham, Mobile, Huntsville and Montgomery. Moore won, as expected, in the rural largely white parts of the state, but he lost in the black rural areas, where turnout was much higher.

Jones had a big advantage among younger voters and won overwhelming majorities among African Americans. He also won the independent vote by 9 points, an indication that Moore was abandoned by sections of affluent white voters who traditionally vote Republican. Some 22,000 voters cast write-in ballots, a higher number than Jones’ margin of victory. On Sunday, Senator Shelby had told CNN that he would not vote for Moore and he urged Alabama Republicans to write in the names of other Republicans.

The result is a serious blow to Trump, who intervened strongly in favor of Moore after the Senate Republican leadership withdrew its support following allegations that the 70-year-old former judge had made improper sexual advances to teenage girls when he was a deputy district attorney in his 30s.

Jones’ admission to the Senate will cut the Republicans’ majority to one, 51 to 49.

The election campaign itself was a spectacle of political reaction and mud-slinging. Moore is a fascistic evangelical who advocates the establishment of a theocracy in the United States. He supports making homosexuality a crime, glorifies the pre-Civil War South, has called for the deployment of US troops on the border with Mexico and promotes xenophobia as part of a pseudo-populist crusade against the “Eastern establishment.”

"Jones and the Democratic Party virtually ignored Moore’s ultra-right policies and instead based their campaign almost entirely on playing up accusations of sexual misconduct against the Republican candidate. As Election Day approached, the national Democratic Party and its allied media sought to leverage the Moore allegations to revive charges of sexual harassment against Donald Trump..."

He was twice removed from the state Supreme Court for defying federal court rulings against his agenda of religious bigotry. The first occasion was his refusal to abide by a ruling that he take down a three-ton monument to the Ten Commandments which he had installed outside the Supreme Court building. The second was his issuing of instructions to probate court judges to continue enforcing a state law banning same-sex marriage that had been overturned by the federal courts.

In one campaign appearance, Moore was asked when he believed America was last “great.” He said one would have to go back to the period before the Civil War, i.e., during the period of slavery in the South. In 2011, he told a right-wing talk show host that getting rid of every amendment to the US Constitution after the 10th would “eliminate many problems.” That would mean overturning the amendments that freed the slaves, guaranteed the democratic rights of freedmen and granted them the right to vote.

Jones and the Democratic Party virtually ignored Moore’s ultra-right policies and instead based their campaign almost entirely on playing up accusations of sexual misconduct against the Republican candidate. As Election Day approached, the national Democratic Party and its allied media sought to leverage the Moore allegations to revive charges of sexual harassment against Donald Trump that had first been raised by the media and the Hillary Clinton presidential campaign in 2016. This will undoubtedly be intensified following Jones’ victory.

Indeed, USA Today published an editorial Tuesday night that cited a Trump tweet with sexual innuendos directed against Democratic Senator Kirsten Gillibrand, who had called for his resignation over sexual allegations against him. The newspaper declared that Trump was unfit to remain president.

Apart from this sexual mud-slinging, Jones stressed his independence from the national Democratic Party, his support for increased military spending, his commitment to fiscal austerity and his backing for tax cuts to improve the business climate for corporations wishing to exploit the deeply impoverished working class in Alabama. He combined an appeal to black voters with an effort to win over disaffected Republicans.

Jones made no class appeal whatsoever in a state that is a byword for crushing poverty and exploitation, and offered no serious proposals to address unemployment, poverty wages or lack of decent education, housing and health care.

Nevertheless, he benefited from growing opposition to Trump and his administration’s attacks on health care and democratic rights, its push for a $1.5 trillion tax windfall for the rich and threats to unleash a nuclear war against North Korea. According to exit polls, Trump’s disapproval rating of 48 percent equaled his approval rating. This is in a state that he won last year by a margin of 63 percent to 35 percent.

In his victory speech, Jones reiterated his campaign themes of “unity” and bipartisan cooperation with the Republicans, declaring, “We tried to make sure this campaign was about finding common ground.” He said nothing about the pervasive poverty in Alabama, the fourth poorest state in the country, where household median income is nearly $11,000 less than the national figure. Nor did he mention, let alone criticize, Moore’s fascistic politics.

The Democratic victory, which clearly came as a shock to Jones himself, revealed the fragility of the hold of right-wing populist and nativist politics on states that have long been conceded by the Democrats to the Republicans. Alabama itself has undergone a significant development in recent years, with the entry of major firms such as Airbus, Mercedes Benz, Honda and Hyundai and the rapid growth of an industrial working class.

Manufacturing workers made up between 13 and 16 percent of the total workforce in 2015. That is the fifth highest concentration of all states, according to the National Association of Manufacturers, and a substantial increase from a decade ago.

Neither of the right-wing parties of US big business offers any policies to defend the interests of workers in Alabama or any other state. Nor was Tuesday’s election an indication of a surge in support for the Democrats. Exit polls showed that the majority of voters disapproved of both parties, and by similar margins.

BARRY GREY—The election campaign itself was a spectacle of political reaction and mud-slinging. Moore is a fascistic evangelical who advocates the establishment of a theocracy in the United States. He supports making homosexuality a crime, glorifies the pre-Civil War South, has called for the deployment of US troops on the border with Mexico and promotes xenophobia as part of a pseudo-populist crusade against the “Eastern establishment.”

Leave Syria Or Else! ; Iranian General To The US

Jones is filling the balance of a vacant seat and will require running again 2020. He will have plenty of time to sell his soul for wall street campaign money.