Tinpot Despot Erdogan Reveals Where He Stands on Syria

BE SURE TO PASS OUR ARTICLES ON TO KIN, FRIENDS AND COLLEAGUES
[su_panel background="#f8f8f7" color="#1d1919" border="2px solid #41362d" shadow="7px 0px 1px #eeeeee" radius="3"]The pathological mentality of Erdogan is totally medieval, constantly plotting against friend and foe with no principles or sense of loyalty to anyone. He is a natural ally of Washington and the European vassal imperialist states, despite his latter-day tepid rapprochement with Russia and Iran. [/su_panel] 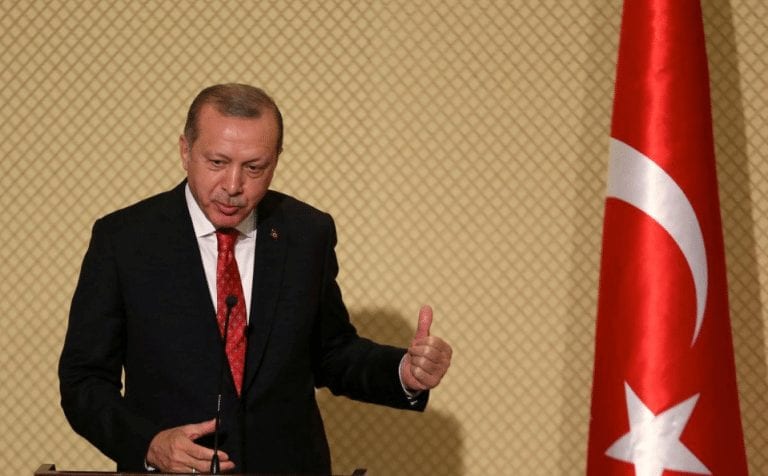 No offence to real reptiles, but there are few poisonous snakes as dangerous as the Erdogan subspecies.

Speaking at a press conference in Tunis with his repressive Tunisian counterpart Beji Caid Essebsi, Erdogan disgracefully called Syria’s Assad “definitely a terrorist who has carried out state terrorism,” adding:

“It is impossible to continue with al-Assad. How can we embrace the future with a Syrian president who has killed almost a million of his citizens?”

“There is no peace in Syria, and this peace won’t come with Assad.”

Syria’s Foreign Ministry blasted his comments, saying he “continues to misdirect Turkish public opinion with his usual froth in an attempt to absolve himself of the crimes which he has committed against the Syrian people through advancing support to the various terrorist groups in the country."

He earlier called for removing Assad from office, backing ISIS and other terrorists, committing atrocities against Syrian civilians. He aims to annex northern Syrian territory, why he invaded the country earlier. His troops remain illegally, combatting Kurdish fighters.

He’s a tinpot despot, a wannabe sultan, an international outlaw, a thuggish human rights violator, terrorizing his own people and regional countries – cleaning house, eliminating political challengers, at war with press freedom, imprisoning scores of independent journalists and others opposing his ruthlessness.

His remarks about Assad from Tunis show he can never be trusted. Western states turn a blind eye to his worst crimes. Turkey is a democracy in name only. Erdogan rules with an iron fist. Anyone criticizing or challenging his leadership risks imprisonment, including public figures, journalists, academics, other intellectuals, human rights activists, even young children – on charges ranging from insulting the president to terrorism, espionage or treason.

He purged tens of thousands of regime critics, uses emergency powers to target dissent, disappears opponents, extrajudicially killing or imprisoning them. In 2016, he cited Hitler as a role model, calling his Nazi regime an ideal way to run Turkey, saying he wants things streamlined for more effective decision-making.

Complicit with ISIS, he was involved in smuggling, refining, and selling stolen Syrian and Iraqi oil on the black market, enriching himself and other regime officials. Vilifying Assad after pretending to ally with Russia and Iran for conflict resolution in Syria showed he can never be trusted.

The oligarchy versus society

Intelligence Community Says US Had Better Reauthorize Surveillance… Or Else