The world, to say nothing of two-thirds of the people in this country, deplores Donald Trump. It rejects his racist, sexist rhetoric, his wild and foolish pronouncements, his arrogance, his abundant manifestations of malignant narcissism. The world deplores his withdrawal from the Paris Accord, his rejection of the painstakingly negotiated Iran nuclear agreement, and now his decision—opposed by his leading advisors (except for his son-in-law Jared Kushner)—to recognize, as no other nation save the occupying power Israel ever has, occupied Jerusalem as the capital of Israel.

The recent UN General Assembly vote implicitly condemning Trump’s decision—which so infuriated the clueless U.S. UN ambassador, Nikki Haley—was a harsh rebuke to Trump. But did it not reflect a broader repudiation of the contemporary U.S.A.? A recent Pew poll, taken before the Jerusalem announcement, showed that only 49% of the world’s people now see the U.S. favorably. 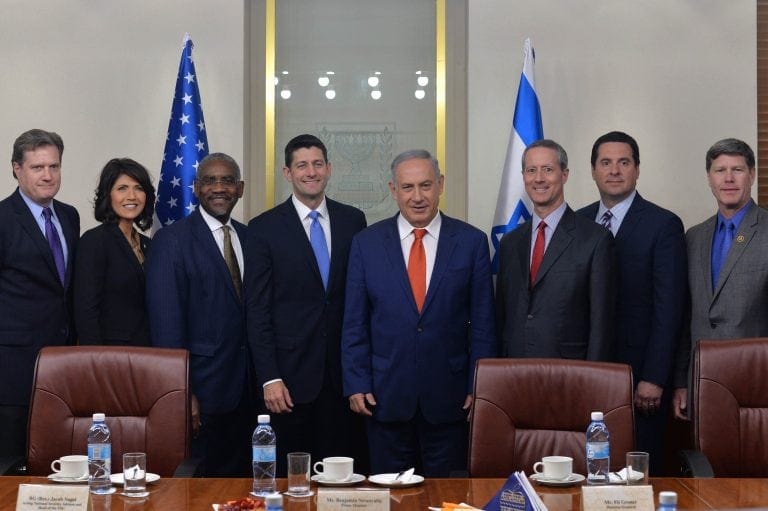 Sucking ass in Israel at taxpayers' expense. This is how these Congressional whores squander our money. The official caption reads: "Speaker of the U.S. House of Representatives Paul Ryan (4L) and his delegation meet with Israeli Prime Minister Benjamin Netanyahu at PM Netanyahu's office in Jerusalem on April 04, 2016. Disgusting. [Photo by Kobi Gideon/GPO]

Trump argues validly that he has simply made official what has been U.S. policy since 1995, when Congress, pressured by the Israel Lobby, passed the “Jerusalem Embassy Act.” The move was politically unproblematic within the U.S.; at the time nearly 50% of U.S. residents told pollsters they believed that “God gave Israel to the Jews.” The mix of Lobby influence, Christian Evangelical credence to biblical myth (Genesis 12:3), general historical ignorance and racist indifference to the plight of a cruelly oppressed and humiliated people produced that vote (of 374 to 37 in the House and 93 to 5 in the Senate).

That is to say: this preposterous recognition of Israeli sovereignty over the whole of Jerusalem, including—as it necessarily does—an open attack on Palestinian rights, is not merely another eccentric work of Trump. It is a natural emanation of U.S. imperialist culture.

The Obama presidency showed how a leader continuing and expanding on his predecessor’s assault on the Middle East could maintain high domestic ratings; enjoy the respect of the leaders of allied states, such as the UK, France and Germany; and if we can believe the polls even receive a generally positive reception from the world’s people.

But the Trump presidency shows how a leader staying his predecessors’ course on Afghanistan, Iraq and even to a considerable extent Syria (these involvements, and U.S. knee-jerk support for Israel, being the key source of global hatred for the U.S.) can only retain the support of one-third of the U.S. population. This is due to his manifest ignorance, bigotry and general buffoonery. It shows too that there are limits to western allies’ deference. Angela Merkel, Theresa May and Emmanuel Marcon have all had harsh words for Trump on climate, Iran, trade, immigration, Islam, Korea threats, and now Jerusalem.

This is good. Fractures in the unholy alliance called NATO, the anti-Russian alliance which successive U.S. administrations have sought to expand, and which under Trump’s watch has now included Montenegro, can only be positive. 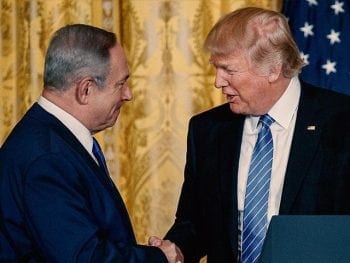 Let Washington’s current imperialist partners conclude that the U.S. cannot lead the world in a direction that advantages them. Let them conclude that the preposterous Jerusalem decision, which can only produce more violence, is the last straw. Let the European masses realize that Europe’s refugee crisis is the fruit of U.S. interventions in Afghanistan, Iraq, Syria and Libya that made no sense. Let them realize that Washington’s drive to include Ukraine in NATO through the February 2014 putsch led to Moscow’s annexation of Crimea and the U.S.-mandated sanctions on Russia damaging European economies. Let them realize that U.S.-directed military drills in east Europe are needless, expensive provocations. Let them rethink the whole relationship with the bloodiest power in the contemporary world, which virtually celebrates Israeli bloodlust with no thought for the consequences.

Let the Russians and Chinese, India and Brazil, everybody everywhere understand that the U.S. is not, should not, and cannot be what it so arrogantly pretends to be: world leader and moral exemplar. It is rather a behemoth in steep decline, hopelessly corrupt and fundamentally unjust, despite its vast wealth and ferocious martial might unable to control the course of global events or even bully its closest allies into obedience.

The 128-9 vote on Jerusalem at the UN General Assembly Dec. 21 is not just a response to one man’s stupid announcement on Dec. 7 but a belated reply to all too much terror, inflicted by what Martin Luther King in 1967 called the “greatest purveyor of violence in the world.” That world was dominated by the contention of two superpowers with firm alliances behind them. This world is dominated by a chaos produced by a would-be hegemon alienating allies, quasi-allies, friendly non-allies and declared foes alike.

The president is, by his own secretary of state’s assessment, a moron; he knows nothing about history. While indifferent to details about foreign and domestic policy he stands squarely with Israel, blissfully heedless of the consequences. Under his administration, as long as it lasts, the U.S. can only decline further as a world power. America will be “great” again, through economic growth bypassing the masses, and military expansion accomplishing nothing but further global outrage. Then, like Spain, the Netherlands, the U.K. and Japan before it, it will shrivel up as China’s economy relentlessly expands and as Eurasia ultimately emerges as the world’s most dynamic common market.

Trump’s unwitting historical role is to positively abet this decline. What the president announced as a “new approach to conflict between Israel and the Palestinians” and “a long-overdue step to advance the peace process and to work towards a lasting agreement” is in fact another step down the slope.

Harvey Weinstein, the Democratic Party and the Power of the “Creative Class” – Thomas Frank on RAI (9/9)

(VIDEO) The Catastrophe of #MH17: #BBC in the Search of the “#BUK” – The Video Report Deleted by @BBC