The “fractured world”: Plutocrats convene in Davos amid war and great-power conflict 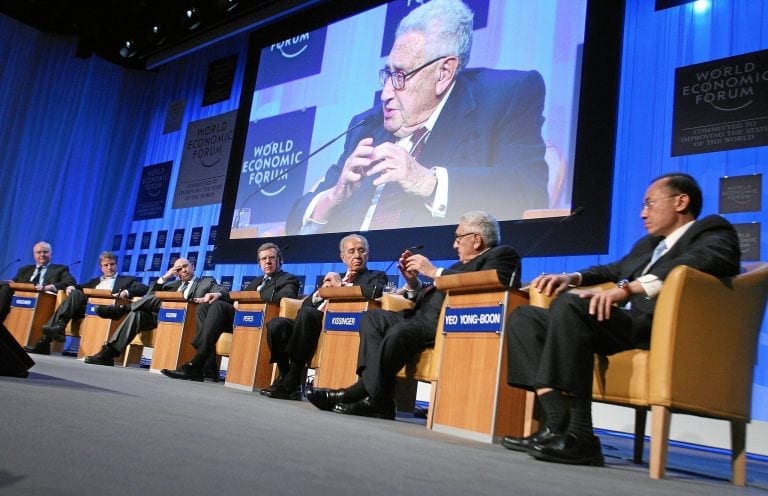 Thousands of business executives, central bankers and world leaders gathered at the World Economic Forum this week in Davos, Switzerland. The general mood was one of apprehension over every aspect of global politics and economics, from the possibility of a financial collapse on the scale of 2008 to the threat of a new world war and the growth of social anger around the world.

Even though a typical billionaire attendee will have been nearly 20 percent richer than he was last year, and will have acquired more than a few new houses, airplanes, paintings, boats and jewels, “Davos man” was nervous.

Perhaps never in the forum’s 47-year existence has its program reflected such unease. The vapidly resolute topics of recent years, such as “Resilient Dynamism” and “The Reshaping of the World,” have been replaced with a more sober theme: “A Fractured World.”

The event’s official summary contrasts the utopian vision promoted at the turn of the century, based on the belief that “greater economic interdependence among countries, buttressed by liberal democratic institutions, would ensure peace and stability well into the new century,” with the “changed” reality that “geostrategic fissures have re-emerged on multiple fronts with wide-ranging political, economic and social consequences.”

The most serious of these fissures is the imminent threat of a war between major world powers. As the summit ended, this reality was brought home by a cover story in the Economist, published online Thursday, “The next war: The growing danger of great-power conflict.”

The article’s introductory paragraphs paint a bleak picture: “In the past 25 years war has claimed too many lives. Yet even as civil and religious strife have raged in Syria, central Africa, Afghanistan and Iraq, a devastating clash between the world’s great powers has remained almost unimaginable.”

“No longer,” declare the magazine’s editors. Amid the erosion of “the extraordinary military dominance that America and its allies have enjoyed,” war “on a scale and intensity not seen since the second world war is once again plausible. The world is not prepared.”

The Economist noted the publication on January 19 of the Pentagon’s 2018 National Defense Strategy, which declared that “Inter-state strategic competition, not terrorism, is now the primary concern in US national security,” and argued for an aggressive expansion of the United States’ nuclear forces that could potentially put it in violation of the Intermediate-Range Nuclear Forces (INF) treaty.

In the week following the publication of that document, an extraordinary series of events has reaffirmed its central message that “great power” conflict is now on the agenda.

On Tuesday, General Sir Nick Carter, the head of the British Army, proclaimed that the present global situation has “parallels with 1914,” declaring, “Our generation has become used to wars of choice since the end of the Cold War, but we may not have a choice about conflict with Russia.” 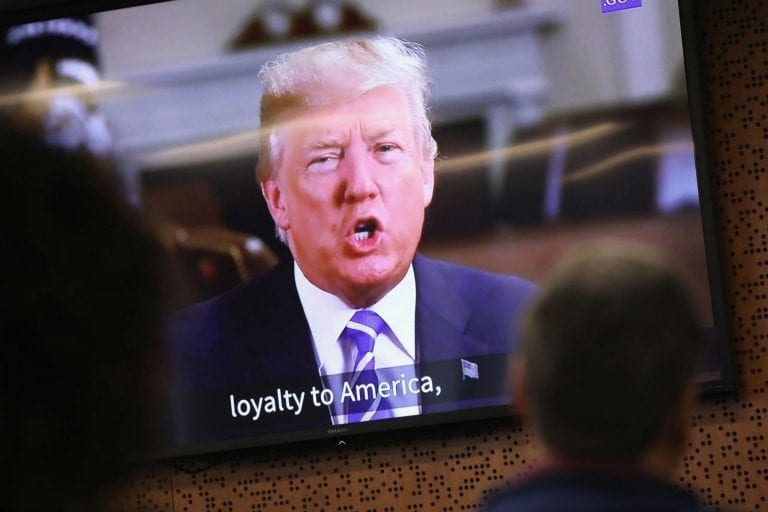 Trump spreading his trademark imbecility at Davos in 2018, His fleecing of the masses to benefit the plutocracy however endears this clown to the sociopathic privileged mob gathering in Davos.

Also on Tuesday, US CIA Director Mike Pompeo broached the possibility of a preemptive strike on North Korea. Two days later, General Robert Neller, the head of the US Marine Corps, publicly discussed the possibility of a ground invasion of the impoverished country, declaring that such a war “will be a very, very kinetic, physical, violent fight.”

To back up its threats, the US this month deployed nuclear-capable B-2 bombers to Guam, bringing nuclear strikes by supersonic stealth aircraft against North Korea within the realm of possibility. Any war with North Korea could quickly expand to involve China and Russia.

The Davos summit took place against the backdrop of the widening offensive by Turkey against Kurdish militias backed by the United States, raising the danger that “US and Turkish soldiers, two NATO allies, could soon clash,” as the Wall Street Journal bluntly put it. The expanding war in Syria involves not only the US and Turkey, but Iran and Russia as well. Adding to the tensions is the fact that the tanks being used to pound the positions of US-backed militias had been supplied by Germany, which has grown increasingly distant from its transatlantic NATO ally.

While the United States has played the most aggressive role in stoking up global tensions, the world leaders at Davos made it clear that they would not be out-done by American belligerence. German Chancellor Angela Merkel gave a speech to the forum in which she declared "that Europe has not been the most active continent on foreign policy, and that we often depended on the United States, which is now concentrating more on itself, must compel us to say: we have to assume more responsibility; we have to take our fate into our hands.” That is, Germany and Europe must remilitarize.

The threat of war was only one of the threats vexing the Davos elite. The past week saw a spate of warnings that red-hot stock markets are on the verge of a meltdown. William White, the chairman of the OECD review board, declared this week: “All the market indicators right now look very similar to what we saw before the Lehman crisis.” Among the most contentious summit panels was one titled, “Could 2018 Be the Year of the Next Financial Crisis?"

Even more imminent was the threat of trade war, implying the potential breakdown of the dollar-denominated international monetary system. Trump, despite his relatively subdued (for him) closing address, went to Davos guns blazing, having just slapped tariffs of up to 50 percent on imports of solar panels and washing machines.

Treasury Secretary Steven Mnuchin sparked a substantial selloff of the dollar this week after he declared that “a weaker dollar is good,” leaving the greenback down by 10 percent for the year and spurring warnings of a competitive devaluation of the euro in a retaliatory trade war measure.

And yet, amid all of these dangers, panel moderator Heather Long declared that the “biggest topic at Davos” and the “biggest topic around the world,” was “inequality.” A newly-released report by Oxfam showed that just one percent of the population accumulated 82 percent of all social wealth created in the past year.

In his annual letter to CEOs attending Davos, Blackrock Chief Executive Larry Fink warned that even though “those with capital have reaped enormous benefits… popular frustration and apprehension about the future simultaneously reached new heights” amid “low wage growth” and “inadequate retirement systems.”

After enumerating the various geopolitical tensions and social crises gripping the world, the summit’s official program summary sanguinely pronounced that “By coming together at the start of the year, we can shape the future by joining this unparalleled global effort in co-design, co-creation and collaboration” in order to create a “shared future.”

Few to none of the assembled billionaires took this feel-good nonsense seriously. When they step off their private jets from Davos, they will resume their daily business of plotting wars, scheming to enrich themselves, and devising ways to suppress and repress social discontent—although perhaps with a heightened awareness that, if the world is in crisis, the working class may soon hold them responsible.

ABOUT THE AUTHOR
Andre Damon is a senior analyst with wsws.org, a Marxian publication.