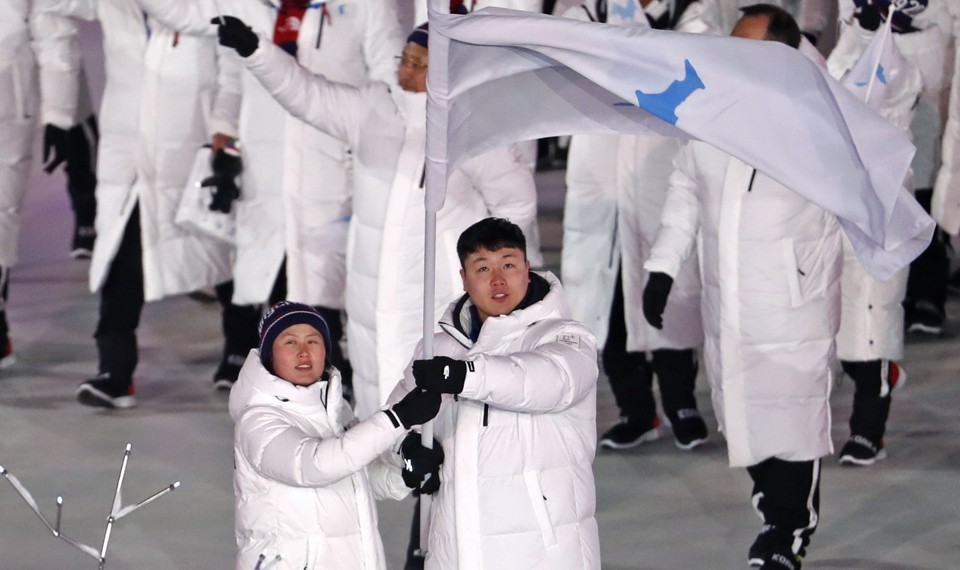 North Korea, like virtually every country on earth, is using the Olympics this week as an opportunity for political theater, and this has greatly upset many in US media. Ostensibly this is because North Korea, marching with South Korea in the opening ceremonies and sending a squadron of cheerleaders to the Winter Games, is getting a pass on human rights abuses. But if one scratches the surface of the widespread outrage, it’s clear the real objection is that North and South Korea are having bilateral peace talks without the permission of—much less the participation of—the United States. 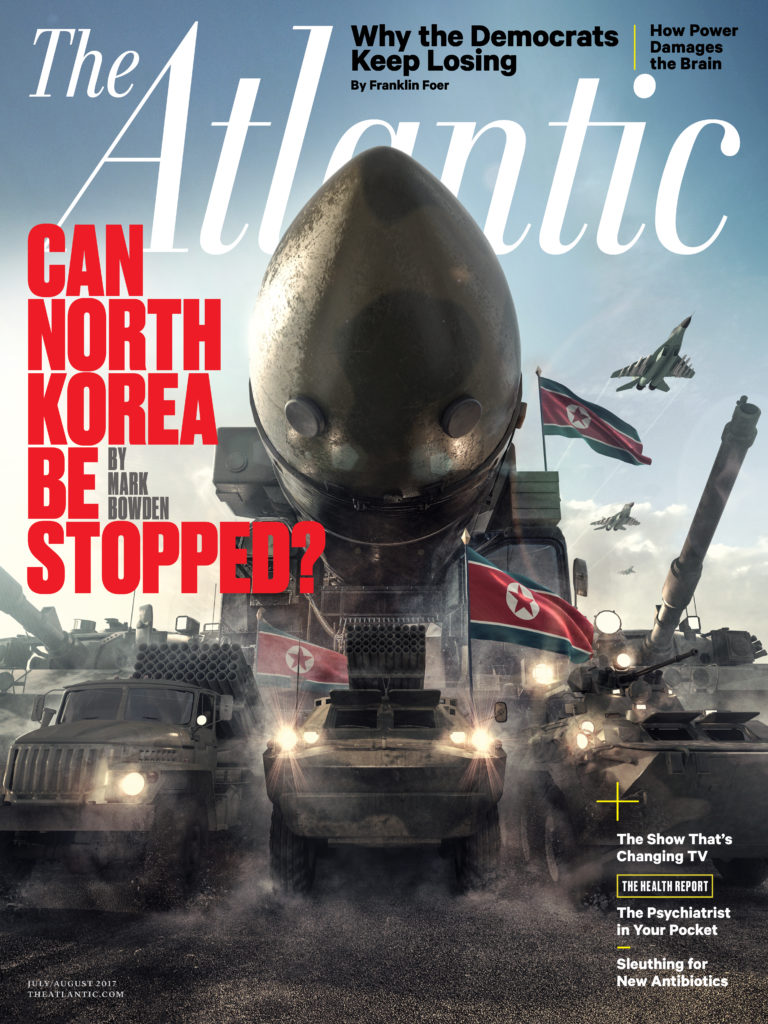 Not shown: the US military, whose budget is roughly 100 times the size of North Korea’s

Leading the charge were four pieces by Atlantic Media—an outlet that last year plastered the cover of its magazine (7–8/17) with a cartoonish depiction of a North Korean invasion one might see in a Tom Clancy video game:

The first piece (Quartz, 2/7/18), ostensibly a broad overview on a history of “regimes” using the Olympics to cover up their crimes, began the trend of decrying North Korea’s Olympic participation, calling it a “repressive authoritarian state that keep their citizens in check with fear and unchecked power” and “gross human rights violations.” These abuses are presented as prima facie reason to bar North Korea from any participation in the Olympics, without any indication as to what human rights standard Olympic countries ought to meet.

The other two Quartz pieces and The Atlantic piece repeat the same line: North Korea’s human rights abuses are so great it should be barred from “propaganda” exercises, regardless of what the South Koreans think is in their best interests.

The Atlantic’s Uri Friedman (2/9/18), lacking any coherent reason to level outrage at the peace gesture, disclosed it just sort of made him feel bad:

There they were, the South and North Korean Olympic teams marching together in sparkling white jackets behind a flag symbolizing Korean unity, as the soulful notes of the Korean folk song “Arirang” played and top South and North Korean officials warmly greeted each other in the stands, during an Opening Ceremony in Pyeongchang extolling peace. It felt wonderful.

But it also felt … wrong.

Friedman seems chiefly aggrieved that South Korea’s athletes should have to dilute their moment of glory with North Koreans who were allowed to violate pointless formalities:

They shared that exceedingly rare moment with athletes and coaches from North Korea, which did nothing to organize the event, missed the registration deadline for sending a delegation, and boasts only two athletes who qualified for the competition on merit.

Oh no, not the registration deadline!

Like all these articles, Friedman’s assumes the South Koreans are at best naive children being duped, and at worst cynical enablers indifferent to human suffering. The idea that there are larger concerns at work—namely staving off nuclear holocaust—is never seriously addressed. 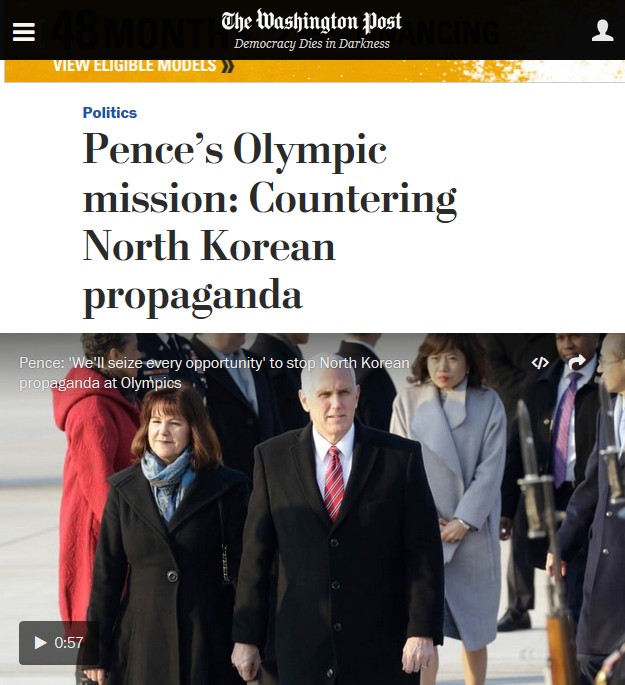 <—• The Washington Post  (2/9/18) did not seem to be kidding when it called Vice President Mike Pence “a mild-mannered, if resolute, superhero.”

Vice President Pence was a man on a mission….

Thursday at Seoul’s Osan Air Base, Pence had transformed himself into something of an anti-propaganda warrior — a mild-mannered, if resolute, superhero who arrived in South Korea on the eve of the Winter Games to single-handedly rebuff North Korea’s public relations efforts….

Nearly every one of Pence’s actions during his five-day trip to Japan and South Korea this week—his public declarations, private murmurings and scripted meetings and visits—have been aimed at combating North Korea’s shiny propaganda with gritty talk of his own.

It’s hard to think of a better illustration of the concept of cognitive dissonance than the Washington Post unironically referring to Mike Pence as a “superhero” in an article about the dangers of propaganda.

To maintain the pretense of the US as noble arbiter of human rights and fighter of “propaganda,” the piece positioned Pence, the second-highest-ranking member of the Trump administration and its most frequent apologist, as somehow separate from the Trump administration: “Of course, as with most of his international travel, Pence’s goals were complicated somewhat by Trump.”  The more logical explanation—that Pence is simply wielding human rights concerns in service of Trump’s warmongering, not apart from or opposed to it—is never entertained.

The US role of international defender of rights is an axiom of US corporate media (FAIR.org, 5/17/17, 7/24/17, 10/23/17), even as Trump  dismisses the idea of US as human rights champion and loudly buddies up to the world’s most egregious offenders. The Post, unable to challenge the fundamental myth of US as shining beacon of freedom, therefore paints Pence not as a representative of Trump, but a mitigating presence, acting apart from his warmongering agenda.

Pence made clear that it isn’t peace he seeks from North Korea, but “complete, verifiable and irreversible denuclearization.” Why they would or should do that while the president of the United States tweets out threats of nuclear genocideis more of a mystery.

The Post, like The Atlantic, doesn’t bother to interview any South Korean peace activists, or their newly elected left-wing President Moon Jae-in—who was ushered into office with an anti-Trump, pro-unification mandate. Instead, it engages in surface-level moralizing, seeking comment from hawkish Western think tanks like the Lockheed Martin–funded Center for Strategic and International Studies (FAIR.org, 5/8/17). 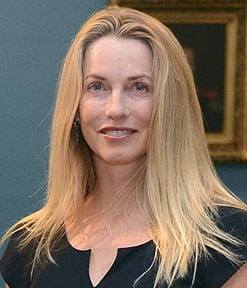 Laurene Powell Jobs: Net worth about 20 billion. She can afford to buy influential toys like The Atlantic, but regrettably fails to use them wisely.

Editor’s Note: Once again, in the Atlantic’s shameless pro-imperial propaganda effort, we see the failure and uselessness of US liberals and liberalism in general when it comes to tackling the gravest problems caused by a late-stage unhinged capitalism. The Wiki sheds some light on this topic. The Atlantic is a publication owned by the Emerson Collective, whose top executive and founder is Laurene Powell Jobs. Who is Laurene? She is the widow of Steve Jobs, co-founder and former CEO of Apple Inc, and she manages the Laurene Powell Jobs Trust. The Emerson Collective, as its label suggests, is a typical liberaloid foundation dedicated to improving the world without addressing the causes of the problems at their root level, almost invariably capitalism, whose global citadel is the US plutocracy and its zillion malignant branches, to which Laurene, by virtue of her status as a multibillionaire, naturally belongs. The Collective is described in bland p.r. language as “advocating for policies concerning education and immigration reform, social justice and environmental conservation.” This is the aseptic, elegant language preferred in the corridors of rich foundations, and the lingua franca of the establishment. Still, that in a matter of such obvious importance for world peace—and the very survival of the planet—such as the fate of Korea, the Atlantic should take a decidedly obtuse and criminally complicit editorial line speaks volumes about the often treacherous role of liberals in world politics. —PG

Adam Johnson is a contributing analyst for FAIR.org.