HELP ENLIGHTEN YOUR FELLOWS. BE SURE TO PASS THIS ON. SURVIVAL DEPENDS ON IT.
A Dispatch from Sputnik 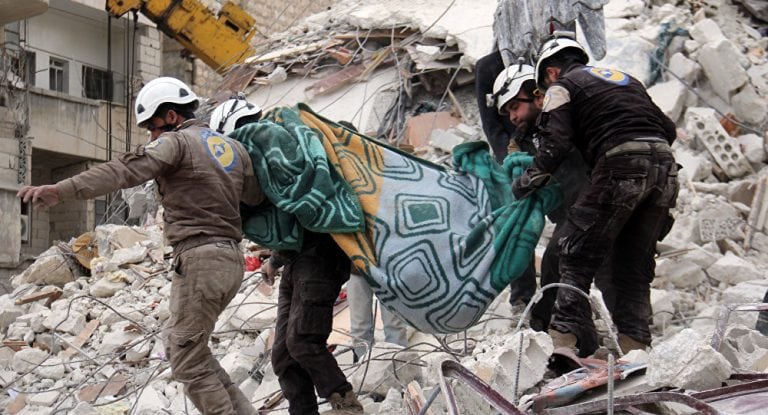 The White Helmets supposedly in action or just a propaganda photo-op? The whole thing stinks to high heaven like an elaborate hoax. (Sputnik cover)

The ongoing hideous information war against Syria is not going to end with the victory over terrorists on the battlefield, the country’s Information Minister Imad Sarah told Sputnik.

The minister said it was essential to counter those distorting facts and playing with concepts, for they are leaving the international community confused about who should be called a terrorist and what the word “terrorist” means, apparently implying Western media referring to groups such as Nusra and Jaysh al-Islam, the latter of which is the dominant Salafi-jihadi faction in opposition-held Eastern Ghouta, as ‘rebels’.

“What we really need to do is to counter Wahhabism, the ideology that is becoming more and more widespread. Big money is being poured into its promotion”, Imad Sarah said.

“Syrian media will have to work double tides to refute endless fake reports that mangle the actual state of affairs in the country and play with terms. We are going to face more attacks on every level: informational, ideological, economic”, the minister said.

As for the reports by the White Helmets group, which claims to be an impartial humanitarian NGO saving lives in Syria, Imad Sarah said that members of this organization have been awarded for their exceptional acting, and that says a lot about the scale of conspiracy against Syria and its people.The White Helmets, which won an Oscar for Best Documentary Short showing its daily operations in 2017, has previously been accused of falsifying information about their work in Syria and staging “rescue” attempts in their videos for propaganda. The well-known footage, featuring a boy covered in ashes and injured in an alleged Russian Air Force strike on the militant-controlled Karm al-Qaterji neighborhood, appeared to be fake, too.

RT released an interview with the father of the “symbol of suffering Aleppo,” which revealed that the White Helmets volunteers had manipulated the injured boy into being photographed instead of offering immediate help, threatening his father to prevent any unwanted media exposure.

Last week the Russian center for Syrian reconciliation announced that it had received information from a local resident that Tahrir al-Sham (formerly Jabhat al-Nusra) terrorists and White Helmets were preparing to stage a provocation, involving the use of chemical weapons in Idlib in order to blame the government for the attack on civilians.Syria has repeatedly denied allegations of chemical weapons’ use, underscoring that it had no weapons of mass destruction, which was confirmed by the Organization for the Prohibition of Chemical Weapons (OPCW).

Who is behind Syrian Observatory for Human Rights? Nimrod Kamer investigates for RT

COULD THE LATEST OUTBURST OF ANKARA’S TEMPER LEAD...

Syria – Aleppo Is Fully Liberated But The...