LETTER TO AMERICA – AN OPPORTUNITY AND A WARNING. THE CHOICE IS YOURS.

After V. V. Putin’s historic speech on March 1st, 2018, and the revelations of Russia's formidable new weapons, I wrote a letter to my friends and family, and all the good people in the USA. I wanted them to know that Russia isn’t threatening them, or anyone, that there is an opportunity as well as a warning for them, and that they are the only ones who can stop the 3rd World War before it starts.  I explained the responsibility they have, as well as the benefits if they rise to the occasion, and the price they will pay if they do not.

Please read and share. It is important people in the USA get this message and understand it.—R.B. 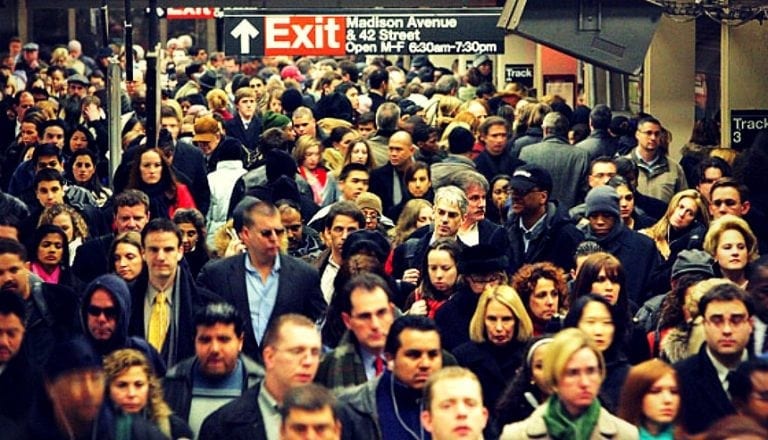 New Yorkers going about their business in a crowded subway platform. Most people in the US are completely unaware of what their ruling cliques have done, recklessly imperiling their very lives along with the rest of the planet.

To My Family and Friends, and All Good People of the USA,

On that historic day, Vladimir Putin revealed to the world that the US military is now obsolete, and no longer capable of "projecting power", committing war crimes, or intimidating and destroying smaller nations around the world. That day has ended forever, one way or another.  The US military is still completely capable of the mission it needs and deserves to do, which is to defend the territory and people of the United States of America.  You are safe. There is no threat.  But the days of your government threatening and destroying other countries is over. I hope you understand this.

Putin's revelation of Russia's game-changing weapons, against which the US military is literally defenseless, is not a threat or a bluff. Only liars and fools speak of "Russian aggression", and the stupidity of anyone who says or believes "Putin is bluffing" is beyond measure. Russia's weapons are real, and the US military industrial complex (that Dwight Eisenhower warned about 57 years ago) has absolutely no defense against them. In spite of plundering and squandering literally trillions of dollars from the US treasury and the American People in the name of  "defense", they are defenseless.

Russia's new weapons present no threat to the American People, unless you allow the people who own and control your government to force the Russians to use them. But if you do allow that to happen, the American people will get exactly what the "good Germans" got in 1945. And you will deserve it, just as much as they did. For the exact same reasons.

Russia is not your enemy. We seek only cooperation for the mutual benefit of all Mankind. But since the fall of the Soviet Union in 1990, 38 years ago, the USA, NATO and the EU have sought to plunder and rule the world. They have been the enemies, the enslavers, the destroyers of the world. No reality based person can dispute that fact. There is no place that the US or NATO has gone into in the last 4 decades that is better off. Not one. In fact, there is no place that NATO or the US have intervened, (usually against international law) that hasn't become a failed state, hell on Earth for the citizens, and a genuine danger to the surrounding regions and the world. It is the US government and NATO, and the people who own and control them, who are the threats and the enemies to the future of Humanity. But their days of disregarding international law and destroying weaker nations with impunity are now over, as of March 1st, 2018.

The good people of America now have a huge opportunity, and a huge challenge. Russia spends less than one tenth what the USA spends on military and defense, but their military and weapons are superior in every measurable way. The waste, corruption and abject venality of the US military industrial complex has wasted trillions on weapon systems that are now literally useless, and which have left the US military (and by extension the American people) defenseless before the power of Russia's weapons, which are  designed and produced to be effective rather than profitable.  The opportunity is this - the USA can now reduce its military spending (the highest in the world) by 90% and still be as safe as you are right now, spending almost a trillion dollars a year on useless weapons and a defenseless military.  This gives the USA, starting as soon as you want, an extra $800 billion, per year, to spend on things that have actual worth, things you really need.  Health care, free college education, fixing the rotting economy and infrastructure that are daily becoming more of a threat to the American people than Russia has ever been.

Your challenge is that you must root out an entrenched  and ruthless kleptocracy, built on deceit and oppression, and which is bent on war, and will stop at nothing to cling to its power. It is a huge task, an historic task, but in it lies your only hope. These parasites must be stopped, and if the American People are not up to the challenge, if they fail in their historic mission, they will leave it to the armies of the world, led by Russia, who will no longer tolerate those who want to rule the world. Your rulers are leading you to a war you cannot win, a war from which you, your families and your nation, and perhaps the world, will never recover.  If the American People do not prevent their rulers from starting World War Three, there will be war.   Peace and prosperity or death and desolation. These are your only choices, and now is the time to make your choice and act accordingly.

An annual windfall of $800 billion is yours for the taking, if you have the wisdom, courage and determination to take it back from the charlatans and scammers who have been robbing and wasting your trillions for years.  Already these vermin claim the only possible solution is to give them even more money, as if those who fail when they out-spend their competitors ten to one might succeed by spending twenty to one.  At some point, the host must rid itself of its parasites, or risk being bled dry.

When the American People stand up to their oppressors, rid themselves of their parasites, the people of Russia and of the world will stand with you, will applaud and support you. All good people in the world are on the same side. Those who oppress and exploit you do the same to us. Your enemies are our enemies, and ours are yours. Stand up, as we have, throw off your chains and illusions, see for yourself who your real enemies are, and together let's defeat them, before they destroy the world and all that is good in it. Only you can stop them without a global war. If you don't, there will be war, and we will stop them. But those who live in the USA will suffer the fate of those who start and lose a world war. It is not a fate to be desired.

America, that time has now come for you. The choice is stark and clear, and you must make it soon.
Either bring your rulers to heel,  stop the war they are bent on starting, and reap the benefits of stopping the most egregious and wasteful scam in history, or do nothing, allow your parasites to consume you, and let them lead you and your children and your nation to Armageddon and a fiery death in a war that you now know you can never win. The choice is yours. And so is the responsibility. 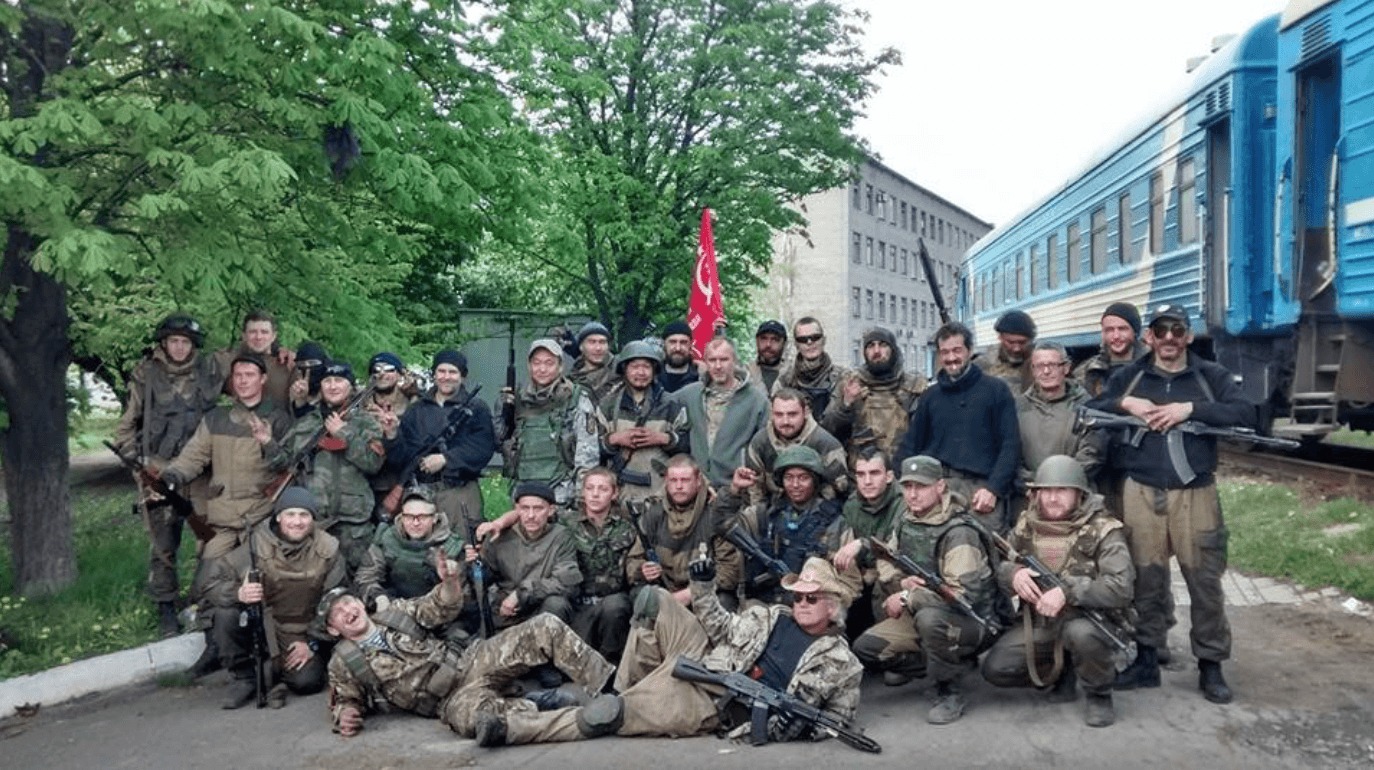 Texac (front, on the ground) with his comrades in Donetsk.

ABOUT THE AUTHOR
Russell Bonner Bentley, aka “Texac”, is an American-born writer and volunteer soldier currently serving with the Novorossiyan Armed Forces (NAF), as the young republics in Eastern Ukraine confront the assault of the US-created and nazi-dominated Kiev regime.  Russell incarnates the spirit of the Lincoln Brigades, and Jack Reed. Besides his duties as a frontline fighter, Russell also works as a war correspondent. His chronicles about the situation in that strategically critical region, featured as “War Diaries” on The Greanville Post, are also distributed to other leading left publications, reaching a global audience. From January to June 2015, he was a soldier in the Essence of Time combat unit of the Novorussian Armed Forces (NAF). He served at the Donetsk airport and Spartak as a rifleman and RPG gunner. Texac is now doing Information Warfare for the Donetsk People's Republic. His team is supported ONLY by contributions from friends around the world. They operate on a shoestring budget with few resources. They need cameras, computers, microphones, a smart phone, a guitar, bulletproof vests and helmets, as well as daily operating expenses for things like taxi fare and food. You can donate to them via Paypal, contact him at russellbbentley@gmail.com, or visit the donation page. A repository of Texac articles can be found here.