Home ANNOTATED NEWS Venezuelan Cryptocurrency, el Petro, Has Won Whether It Succeeds or Not

Venezuelan Cryptocurrency, el Petro, Has Won Whether It Succeeds or Not

BY RORY HALL, EDITOR IN CHIEF, THE DAILY COIN

There has been a variety of articles published by TelesurTV, the first week of March, covering the advancements and influence of el Petro, the Venezuelan created cryptocurrency backed by oil and possibly gold and diamonds as well. The White Paper for the currency is yet to be released, but when the cryptocurrency was first announced at the beginning of December 2017 Venezuelan President Maduro stated it would be backed by gold, diamonds and oil.

Today our friend and colleague Jeff Brown, China Rising, passed along two different articles that show the global impact of el Petro and why the Federal Reserve Note is moving closer to the dustbin of history with each passing day. If you think the criminals benefiting from the world reserve currency status of the Federal Reserve Note aren’t concerned about el Petro and cryptocurrencies in general, well, look no further than what Menendez and Rubio are doing in the U.S. Senate.

Democratic U.S. Senator Bob Menendez and his Republican counterpart, Marco Rubio, have co-authored a letter denouncing the Petro, and requesting that the U.S. Treasury Department closely monitor its progress. The lawmakers also made suggestions on measures the agency can take to undermine the success of the digital currency. Source

It is no secret that nations around the world are moving away from the “world reserve currency” Federal Reserve Note, U.S. dollar, and either utilizing direct currency swaps, primarily with China or coming to terms in more creative ways of conducting international commerce. The days of a world reserve currency system are numbered and we at The Daily Coin believe those days will run out before the calendar strikes 2030. 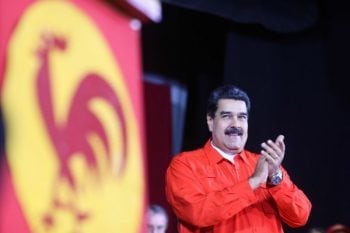 Venezuela Pres. Maduro has been encouraged by the Petro's swift acceptance in key sectors.

Cambodia is inspired by Venezuela’s el Petro and has decided to create their own cryptocurrency, EntaPay. Some of you are thinking “who cares, it’s Cambodia!” To which I say – death by a thousand cuts is still death.

EntaPay sounds like someone has been paying close attention to what is happening, not only within the crypto space, but fully understands how dangerous the Federal Reserve Note, US dollar based system has become to any nation that doesn’t fall in line and do as they are told. The days of the US government being able to strangle a nation with economic sanctions, using the world reserve currency, are rapidly coming to an end.

A press release describing Entapay said that the cryptocurrency would serve as “the connection between integration payment of encrypted currency and the real world. It has the great potential to even replace Visa as the new mainstream payment mode.”

The statement also mentioned the Petro, saying that it was a means to “assist” Venezuela in “avoiding the Western world’s economic sanctions.”

Threatened with sanctions by western governments, Cambodian Prime Minister Hun Sen may view the launch of Entapay as an economic survival tactic for the future. Source

These are, basically, the same words Russian President Putin used when he stated moving away from the Federal Reserve Note, US dollar was a matter of national security.

Venezuela’s economy has been crushed by some of the sanctions imposed by the US government and was a major catalyst for the development of el Petro.

On Feb. 20, Venezuela officially launched the Petro, the first cryptocurrency backed by oil reserves. Venezuelan President Nicolas Maduro has said the goal of the digital coin is to combat sanctions and the “economic war” waged by the United States government and its junior partners against his country and advance “on issues of monetary sovereignty, to make financial transactions and overcome the financial blockade.”  Source

Venezuela is on the verge of being able to move their country away from US sanctions and, move towards "the socialist nightmare" Maduro has envisioned. Oh, wait a minute, that’s already happening. Could it get worse; could Maduro gather in more power with the success of el Petro?

The Petro, the world’s first national cryptocurrency based on natural resources, has generated sales over five billion dollars during its pre-sale period and has recorded over 186,000 certified purchases. The sale of the Petro has also significantly strengthened the country’s foreign reserves amid increased international aggression.

The announcement of the continued success of the cryptocurrency was made by Venezuelan President Nicolas Maduro during a meeting with members of the United Socialist Party of Venezuela, or PSUV, in the Plaza Bolivar in Caracas on Friday.

Maduro explained that the revenue generated from the sale of the Petro would be used to service “everything our country needs” and formed part of a wider “economic solution” the country’s government had put together.

Data released by Carlos Vargas, Venezuela’s Superintendent of Cryptocurrency and Related Activities, shows that over 83,000 persons in 127 countries have made certified purchase offers for the states cryptocurrency. Source

We do NOT support Venezuelan President Maduro, we do NOT support cryptocurrencies. We are merely pointing out nations around the world are now using tools against the US and the world reserve currency system that were not on the radar as of September 2017. Those tools are now seedlings taking root on opposite sides of the planet to be rid of the world reserve Federal Reserve Note and the crippling effects of saying or doing something the US deep state/shadow government is opposed. What we are seeing are the consequences of an out-of-control government, that, under the Bush, Jr and the Obama regimes made calculated and deadly global moves that have awakened leaders across the planet. These leaders are now doing whatever is necessary to get away from the clutches of dollar hegemony.

Rory Hall, The Daily Coin. Beginning in 1987 Rory has written over 1,000 articles and produced more than 300 videos on topics ranging from the precious metals market, economic and monetary policies, preparedness as well as geopolitical events. His articles have been published by Zerohedge, SHTFPlan, Sprott Money, GoldSilver, Silver Doctors, SGTReport, and a great many more. Rory was a producer and daily contributor at SGTReport between 2012 and 2014. He has interviewed experts such as Dr. Paul Craig Roberts, Dr. Marc Faber, Eric Sprott, Gerald Celente and Peter Schiff, to name but a few. Don't forget to visit The Daily Coin and Shadow of Truth YouTube channels to enjoy original videos and some of the best economic, precious metals, geopolitical and preparedness news from around the world.

Megyn Kelly, as silly as she is, has ended up being a conveyer of Russian truth to Americans (Videos)

Further Signs of More War: A Most Dangerous Game