Home ABOMINATIONS The Persecution Of Assange Proves Him Right

The Persecution Of Assange Proves Him Right

HELP ENLIGHTEN YOUR FELLOWS. BE SURE TO PASS THIS ON. SURVIVAL DEPENDS ON IT.
IN OUR VIEW ONE HAS TO WONDER IF THE MASSES OF IDIOTS PROCLAIMING THAT ASSANGE CAN LEAVE THE EMBASSY ANYTIME HE WANTS ARE REAL PEOPLE OR BOTS PLANTED IN NUMEROUS SOCIAL MEDIA BY THE EMPIRE.
The online Oxford dictionary defines the word siege as a “military operation in which enemy forces surround a town or building, cutting off essential supplies, with the aim of compelling those inside to surrender.”

The strategy dates back to medieval times after the proliferation of the castle, where a defending force could hole itself up inside an easily defended fortress against an invading enemy who would be at a major disadvantage in a direct attack. To get around this, an army who wanted to depose the leadership within a castle or other impregnable construct would simply surround it and refuse to allow any food or supplies to be brought in. With enough patience, those inside would be forced to either starve or surrender.

This is precisely the strategy that is being employed against Julian Assange. If you try to talk about Assange being in a state of functional house arrest on any online forum you will be swiftly inundated by accounts asserting in fascinatingly uniform language that Assange is free to leave the Ecuadorian embassy whenever he wants, which just so happens to be the desire of the empire which currently has him under siege.

Doctors who examined Assange earlier this year say that his health is in a “dangerous” state of deterioration. They had to conduct their examination using improvised means in an unsanitary environment because the embassy isn’t set up for medical examinations, much less healthcare. They say he badly needs care, and he can’t get that care from where he’s at.

In her epic breakdown of the way perception of WikiLeaks is being extensively manipulated by the empire titled “Being Julian Assange“, journalist Suzie Dawson thoroughly documents the effects that Assange’s detention are having on his mental and physical well being. Here is a small sample:

“In his most recent live appearance, Assange is insightful, learned and brilliant as ever. But he is visibly suffering the ever exacerbating physical effects of his 7 year confinement.

After more than half a decade without fresh air to breathe, he coughs and clears his throat constantly. He struggles to maintain cognitive flow – breaking and reforming his thoughts, soldiering on in a concerted effort to express his ideas. It is obvious to any viewer that his vision has been affected. Our eyes need regular exposure to both short and long distances, as well as natural light changes, to maintain their health. With only four close walls to look at, Assange faces partial blindness, as well as a host of other negative effects from his unjust confinement.

Although there are countless social media threads and tweets circulating about Julian and WikiLeaks every day, few if any seem to register the serious and grave possibility that, immersed in our collective complacency, we may lose them forever.”

Julian Assange cannot “leave whenever he wants”. A judge with severely corrupt ties ruled in February that his arrest warrant still stands for an absurd bail-jumping charge from 2012 that Assange has already served his sentence for many times over according to the law as it is written. As soon as he sets foot outside the embassy he will most certainly be arrested, and then most certainly extradited to the US where the Trump administration is aggressively pursuing his arrest.

Chelsea Manning was tortured. CIA black sites exist. The hoards of online trolls promulgating the narrative that Assange can “leave whenever he wants” would crack like eggs under the treatment that is inflicted upon individuals who have dared to stand up to the US-centralized empire.

Assange isn’t hiding from justice, he is hiding from injustice. There is no reason to believe that this draconian empire would give him a fair trial and humane treatment. He can no more “leave whenever he wants” than he could if there was a firing squad stationed outside the embassy door.

And now this same western empire has pressured Ecuador into cutting off Assange’s internet access, phone calls and visitors to its siege, with electronic jammers being placed inside the embassy to make doubly certain that he is completely cut off from the world. A whole new array of weapons have been added to the empire’s siege, and it’s getting a lot hotter in there.

What all this has done, however, is prove irrefutably that Julian Assange has been right all along. The empire that he has been railing against throughout his entire time in the spotlight is every bit as depraved, oppressive and Orwellian as he has claimed, and is unquestionably deserving of his relentless assault upon it.

If you speak out against the US-centralized empire, you will be silenced. If you expose the truth about it, it will lay siege to you until you either surrender or die. Dissent is being stomped out. Truth is being attacked.

Light is feared by vampires.

And we need to be real with ourselves: their siege might work. They may well succeed in squeezing the life out of Assange until he either sets foot outside the embassy, cracks under the mental pressure, or dies, and in any of those cases his voice will be cut off from the world forever.

But remember this! Never, ever forget this: if their siege does work and the empire finally does get its sociopathic claws on him alive or dead, all they will have accomplished is showing the world just how right he always was. They will force us all to become Julian Assange in order to take apart the oppression machine which forever snuffed out the voice of truth one day in London, and we will let truth roar through all of us.

No matter what the brainwashed MSM zombies tell you, any power establishment which will stomp out the voice of someone who simply shares facts about it is worthy of nothing other than relentless tooth-and-claw opposition. 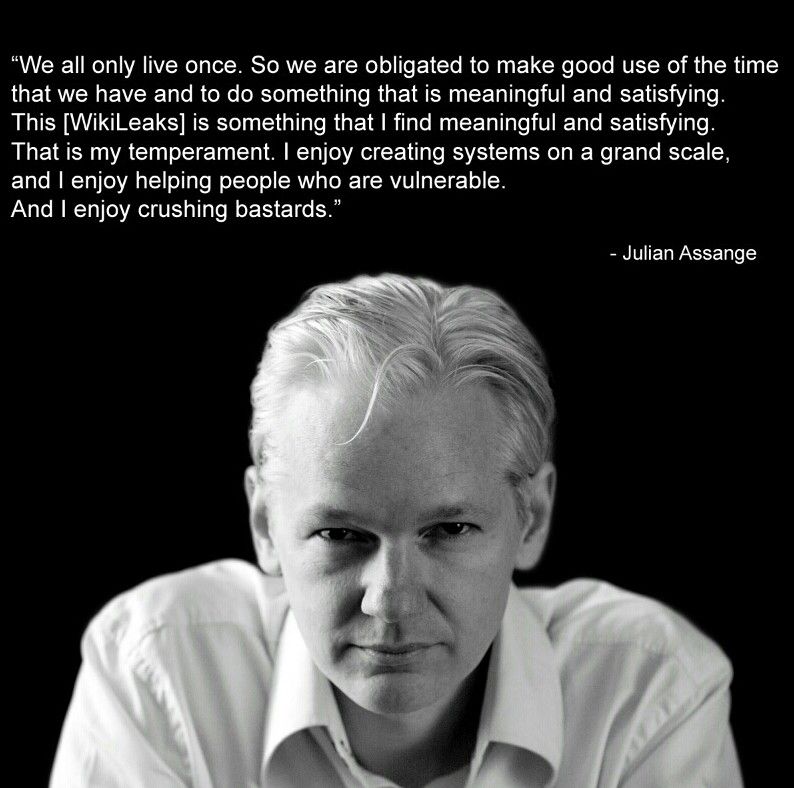 Assange is right. He has always been right. Let’s take these bastards down.

Thanks for reading, clear-eyed rebel. My daily articles are entirely reader-funded, so if you enjoyed this piece please consider sharing it around, liking me on Facebook, following my antics on Twitter, bookmarking and getting on the mailing list for my website, checking out my podcast, throwing some money into my hat on Patreon or Paypal, or buying my new book Woke: A Field Guide for Utopia Preppers.

Labyrinths: the left’s path to triumph is never simple

Why Canada must release Meng Wanzhou