Home ABOMINATIONS Americans Trust ‘Our’ Intelligence Agencies. Should We?

Americans Trust ‘Our’ Intelligence Agencies. Should We?

Something’s deeply wrong here. Government by deceit, cannot be a democracy. And, yet, the public still don’t get the message, even after it has been delivered to us in history-books. By then, it’s no longer in the news, and so only few people really care about it. The message of history is not learned. The public still accepts the ongoing lies — the new lies, in the new ‘news’, for the new atrocities.

During the period after the Soviet Union, and its communism, and its Warsaw Pact military alliance, all ended in 1991, the US-and-allied historical record (all now after the Cold War has supposedly been over) is even worse, and is even more clearly evil, because the ideological excuse that had formerly existed (and which was only the excuse, and not the reason, in most cases, such as in Iran, and in Chile) is gone.

Iraq in 2003 was a particularly blatant demonstration of the US-Government’s psychopathy regarding foreign affairs. So: let’s consider this example (hopefully, to learn a lesson from it — which still hasn’t yet been learnt):

Bill Clinton’s CIA chief George Tenet told President George W. Bush that convincing the American people that Saddam Hussein had WMD, weapons of mass destruction, was “a slam-dunk.” His job wasn’t to find the truth, but to authenticate the ‘evidence’ to back up the President, and Tenet did just that. The American people went for it, even though no WMD actually remained in Iraq, because the U.N. inspectors in 1998 had destroyed all of them, and because there was no indication (other than hired and coerced testimony, and especially fabrications from CIA-partnered anti-Saddam Iraqis such as Ahmed Chalabi) that there had been restored in Iraq any WMD program. A crucial date was 7 September 2002, when George W. Bush and Tony Blair both said that a new report had just been issued by the IAEA saying that Saddam Hussein was only six months away from having a nuclear weapon. The IAEA promptly denied that it had issued any such “new report” at all, and the ‘news’ media simply ignored the denial, which the IAEA then repeated weeks later, and it again was ignored; so, the false impression, that such an IAEA report had been issued, remained in the publics’ minds, and they favored invading Iraq to overthrow Saddam Hussein before there would be, as Condoleezza Rice warned the next day following Bush-Blair, on September 8th, a “mushroom cloud”. It was all just lies — lies that were believed, at the time, and even believed by many for a long time after we invaded. Some of these lies were derived from torturing detainees — torturing them to say what the US and British regimes wanted them to say.

“We do not – I don’t talk about techniques,” Tenet replies.

“And we don’t torture people.”

And here it is, see it for yourself.

As every user of this site knows we maintain an extremely low opinion of mainstream media “journalists”, calling them, deservedly in our view, “presstitutes”, stenographers to power. So what possessed Scott Pelley, an anchor for one of the most loyal imperialist venues, CBS, to even do this interview, let alone sound like he’s pressing Tenet on his blatant lies? If even this mild probing was frequently done on corporate media, some of the truth would eventually find a healthy soil to grow, but this instance is a rare case with few reiterations anywhere.

US President Donald Trump has now appointed to lead the CIA the very same woman, Gina Haspel, who had operated, under Tenet, under Bush, the CIA “black site” in Thailand, where Abu Zubaydeh was waterboarded 83 times and otherwise tortured so that he lost his left eye. The reason why he was being tortured was in order to extract from him testimony that Saddam Hussein had been involved in 9/11, but Zubaydeh didn’t even know anything about any such matter, and tried desperately to say what he thought his torturers wanted him to say, so as to stop these tortures, but he didn’t know that they were intending to torture him until he would implicate Saddam Hussein in causing the 9/11 attacks. And so the torturing just went on and on. The CIA’s Haspel finally gave up, after deciding that he’d die if they continued any further. The problem now was to hide him from the public. So, Zubaydeh subsequently has been held incommunicado at Guantanamo since 2001, so that he can’t communicate with anyone in the outside world, and thus the crimes of George Bush and his employee George Tenet and his employee Gina Haspel, can’t be prosecuted. And, now, Trump appoints her to Tenet’s old spot, as the CIA Director. So: Bush had hired her, then protected her. Obama protected instead of prosecuted her. And, finally, Trump now promotes her, to be the CIA’s new chief. She has demonstrated herself to be a reliable liar for whomever is her boss. Trump therefore can trust her to vouch for whatever he wants her to ‘prove’, to whatever American suckers still remain, as being American suckers. 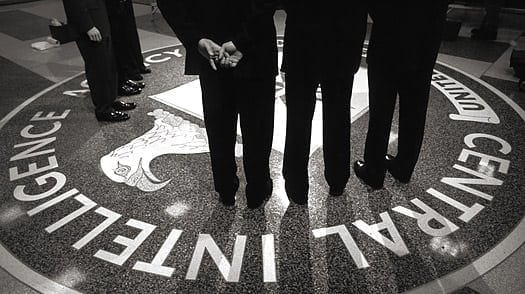 Is this type of government really in service to the public, anywhere? It is in service to the allied aristocracies — those of US & Israel & Sauds & British & etc. — who own those weapons-making firms. The military tail wags this ‘democratic’ dog.

Globally, there is a competition between aristocracies, and they are contending gangs. That’s no different than was the case leading up to WW I. But WW III will end it all — and all of us — unless the public wises up, and fast, and recognizes whom their real enemies are (which are internal, not external). Without cooperation from the news-media (owned by those aristocracies), to expose (instead of spread) the frauds, WW III — the end of everything — is in the cards. It’s in the cards, right now. And, this time, it’s not a mistake. It won’t need any wild assassin to spark the conflagration. Instead, it’s the plan. It has actually been building ever since 24 February 1990. And this has been even more confirmed now.

Should we trust ‘our’ intelligence agencies to tell us how they’re carrying out the plan? Are we idiots? Or is it just that the ‘news’ media are an arm of the CIA? In fact, “America’s Top Scientists Confirm: US Goal Now Is to Conquer Russia”, but did you read about that in the New York Times, or Washington Post, or UK’s Guardian, or at all?

Patriotism is to the public, not to the rulers. Any rulers who expect it to be to them, instead of to the public, are simply tyrants — they are traitors, who happen to rule the public. Do we live in a dictatorship, or in a democracy? If it’s a dictatorship (such as the best available evidence shows that America is), then this, which we are now experiencing, is simply par for the course. But will we continue to accept it? Or, will we, finally, learn from history? (And, if so, then will we do it fast enough, under the prevailing circumstances?) The time to decide, and to act, could be short. Have we had enough now, of that lying? Because, accepting just a little bit more of it, could mean the end of everything. If it’s not going to be the end of the liars, it will probably soon be the end of everything. Because that’s the path we now are on.

The New York Times takes on the social media “hordes”