Winds of War Heading Toward Gale Force in Syria 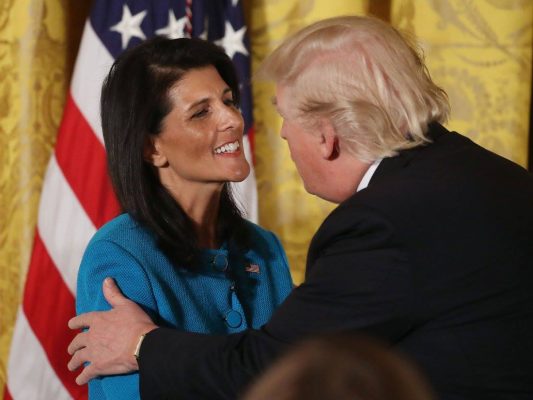 The infinitely odious Neocon Haley embraced by Trump. A world of nightmares, inevitable under decomposing capitalism. (See sidebar below)

Washington and its rogue allies use the Security Council as a sound stage platform for their diabolical imperial agenda – rule of law principles ignored, the UN Charter, other international law and America’s Constitution discarded. Time and again the same or similar scenarios unfolded on the world stage, as well as in Washington and other key NATO capitals.

Russian experts explaining no CW traces were found in the town, no residents ill or dead from toxic exposure, and a Kremlin press statement saying Putin stressed “the inadmissibility of provocations and speculations on” the alleged Douma incident fall on deaf ears in the West.

Facts are irrelevant. On Monday, Trump signaled what’s coming, the fake/staged Douma CW incident “will be met forcefully” in a day or two, he roared.

Before meeting with his war cabinet, he said “(w)e’re making a decision as to what we do with respect to the horrible attack (sic) that was made near Damascus” – a decision to come “tonight (Monday) or very shortly thereafter,” adding:

“This is about humanity and it can not be allowed to happen.” Make no mistake. This is about imperial ruthlessness!

Tass cited a Wall Street Journal report, saying one or more US guided missile destroyers moving into position off the Syrian coast, not there for war games, the real thing likely coming.

“The leadership of the United States, of the United Kingdom and of France, without any justifications and without considering the consequences have engaged in a confrontational policy against Russia and Syria and they are prompting others to follow suit,” adding:

“The fake news on Saturday from Douma is geared toward drawing the attention of society away from the Skripal case, which was muddled up by London, and throwing on Russia completely unconfirmed accusations with the aim of pulling solidarity to build an anti-Russian alliance.”

“I could hold up pictures of babies lying dead next to their mothers, in their diapers, all lying together, dead, ashen blue, open eyed and lifeless, white foam bubbling from their mouths and noses” – no matter the so-called images are fake, Haley ominously adding:

“We have reached the moment where the world must see justice done.”

“History will record this as the moment when the Security Council either discharged its duty or demonstrated its utter and complete failure to protect the people of Syria. Either way, the United States will respond.”

There you have it, another defining moment on the world staged ahead of almost certain US planned aggression – notably with lunatic fringe hawk John Bolton assuming his post as Trump’s national security advisor.

Russia has only one sensible option it’s chosen not to take so far – warning Washington it won’t tolerate US aggression on Syrian forces or its government.

Nebenzya should have announced the following on Monday:

That’s the only language Washington understands. All else is wasted time and energy falling on deaf ears.

If the Syrian Arab Republic goes, Iran is next. Russia has a choice.

Challenge Washington in Syria or risk having to do it in the Islamic Republic, then its heartland – the ominous possibility of catastrophic nuclear war.

“According to the Russian Ministry of Defense, their Black Sea fleet is currently on a high level combat alert in preparation for a potential attack by the US” – nothing more known at this time.

Things could be heading toward something far more serious regionally than occurred before – much more on this as events warrant.

The latest nauseating United Nations performance by the bot-brained Nikki Haley: “…dead children mean nothing to countries like Russia”, which she said has “so much blood on its hands” and that now “justice must be done” because the USA “cannot tolerate such atrocities” … all of these statements, coming from the US of all countries, defy belief. The US started and continues to finance this war by arming and supporting allies of Al-Qaeda. These lies and blood libels against the Russian and Syrian people are breathtaking in their brazen Orwellian opposition to the facts. At this very minute the US is not only “tolerating atrocities” but PARTICIPATING IN ATROCITIES or was the cause of them either directly or indirectly in Palestine, Yemen, Syria, Libya, Iraq, Ukraine, Afghanistan and elsewhere — and that list applies to only the last 17 years — and is working on contingency plans for more Wars of Atrocities against Iran, North Korea, and Venezuela. Haley should be struck by lightning for having the gall to utter the word “justice” … but there is no justice and hence no lightning bolt.

Taking the World to the Brink of Annihilation

The Failure of Social Democracy: Denmark, the Rogue State

My observations resulting impressions of Waffle House Waitress Haley is that she:
a) is serving one and only one interest and that is her Boss The Globalists aka Deep State;
b) her goal is IMO to become the first not-man president of the DC US INC.
c) she has the full support of her Likud advizers who will propose her at AIPAC to let her become the first not-man president of AIPAC country US INC. if they do agree;
d) she is indeed stretching her loyalty to Israel to the utmost on every possible occassion.
(Bullying other Members of UN, trying hard to humiliate Russian Federation before the whole world, threatening other countries if not doing what US is telling them to do, etc.)
e) she is a dangerous, warmongering, not-man individual.

Gross hypocrisy is the name of America’s game! Washington couldn’t have appointed a more experienced, immoral and unethical liar to represent it at the UN.