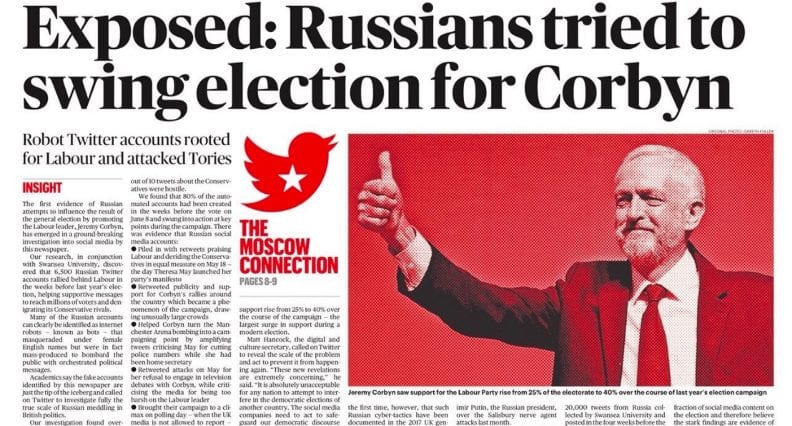 CAN THE ANGLO-AMERICAN AXIS OF HYPOCRISY AND VIOLENCE BE ANY MORE EVIL? WE DOUBT IT, ALTHOUGH THERE IS NO TELLING WHAT THEY'LL TRY TO PULL OFF NEXT.

For months leftist analysts have been warning that the increasingly hysterical anti-Russia narratives being aggressively promoted by the western media would eventually be used to target the political left. Those warnings went largely unheeded in the United States where the Russiagate narrative was being ostensibly used to undermine the Trump administration, and the McCarthyite feeding frenzies which have become normalized for American audiences have now metastasized across the pond to the UK.

As a result, the Poms have now quickly found themselves in a political environment where anyone who remembers the Blair government’s lies about Iraq is smeared as a “useful idiot”, a private British citizen can be falsely labeled a Kremlin bot by a mainstream publication without retraction or apology, and a BBC reporter can admonish a veteran military analyst for giving a truthful analysis about the alleged Douma chemical attacks on the grounds that it could hurt the “information war” against Russia.

And now, in what is undeniably a whole new level of Russophobic shrillness, Russia is being blamed for the gains made last year by Jeremy Corbyn’s Labour Party.

According to a tweet from The Sunday Times, tomorrow’s headline will read, in all seriousness, “Exposed: Russians tried to swing election for Corbyn”.  According to the text in the preview, the Times has allegedly found evidence that Russian bots have been retweeting publicly available posts supporting Labour and criticizing the Tories. Not creating fake news, not even circulating articles from RT or Sputnik, but retweeting conventional, publicly available political commentary.

This would be the same publisher, by the way, whose expertise on Russian Twitter “disinformation” recently led to a false allegation against an antiwar Finnish grandmother in an article about Kremlin trolls.

Tomorrow’s Times front page features Corbyn against a red background in very much the same way the BBC superimposed his image in Soviet-looking garb against a red-colored Kremlin skyline last month, with a red Twitter logo plainly intended to evoke Cold War memories of the USSR flag. They’re intentionally calling up old, generational fears of communists to smear a leftist politician as a Kremlin tool. It’s about as subtle as a kick in the throat.

Hey, Sunday Times? How about fuck you, actually? Fuck your brazen attempt to keep the British people from reclaiming what is being stolen from them by an increasingly corporatist neoliberal government. Fuck your shameless “information war” which places the agendas of plutocrats and intelligence agencies above truth and honest discourse. Fuck your relentless propaganda campaign which smears anyone who remembers the lies they were told about Vietnam, Iraq and Libya as a “useful idiot” and arbitrarily labels any discussion of the very real phenomenon of false flag attacks as a “Kremlin talking point”.

This is as fascinating as it is infuriating. By attacking literally anything which poses an obstacle to the loose alliance of western plutocrats and secretive government agencies, the social engineers who are fueling this Russia hysteria are actually closer than ever before to openly admitting that the west is truly ruled by those plutocrats and agencies. They are now this close to saying “Russia is our enemy because it stands in opposition to the corporatist Orwellian oligarchy which is your real government.”

This is a really extraordinary time to be alive. The nationless power establishment which looked completely unshakeable a matter of months ago is now flipping out like a meth addict whose stash just got stolen and publicly overextending itself in an amazingly conspicuous way. The mechanics of western imperialism and the deceitful nature of the mass media propaganda machine which holds it all together have never been as exposed as they are today.

Keep pushing against the machine, clear-eyed rebels. Truth is winning. Truth will prevail. The bastards are about to fall.

Internet censorship is getting pretty bad, so best way to keep seeing my daily articles is to get on the mailing list for my website, so you’ll get an email notification for everything I publish. My articles and podcasts are entirely reader and listener-funded, so if you enjoyed this piece please consider sharing it around, liking me on Facebook, following my antics on Twitter, checking out my podcast, throwing some money into my hat on Patreon or Paypal, or buying my new book Woke: A Field Guide for Utopia Preppers.

It was always obvious that anti-Russian xenophobia would morph into anti-leftist hysteria, no matter how many “progressive” Russiagaters insisted otherwise https://t.co/RiGI43hOZO

Turns out literally anything which inconveniences western plutocrats is actually secretly Russia.

The Establishment media are now so pathologically terrified of Corbyn they no longer care how unhinged it’s making them look. They will literally print anything — no matter how dishonest or absurd — in the hope it sticks. A shameful betrayal of their readers & their civic duty.