Washington and Tel Aviv lurching toward a war with Iran 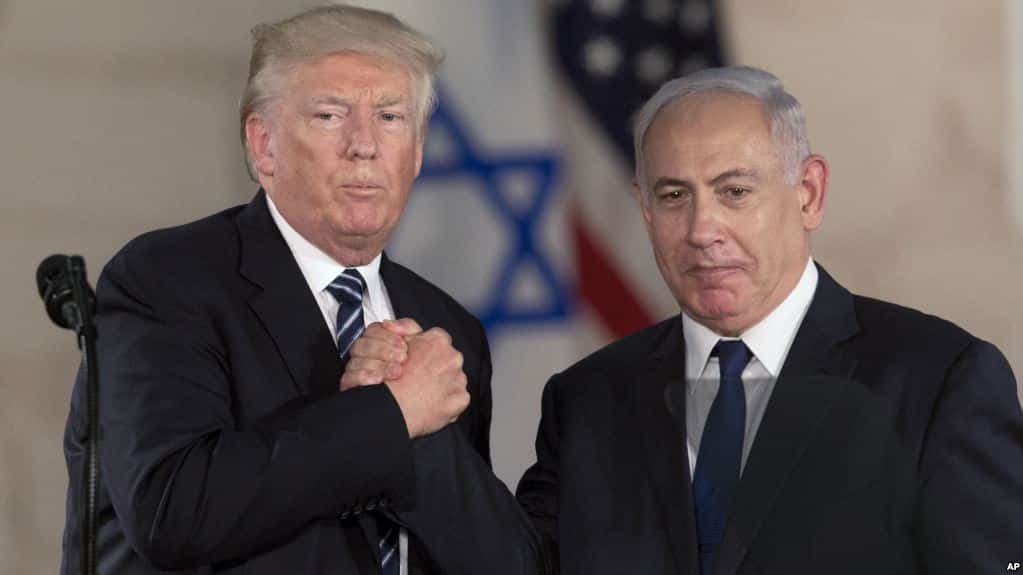 Trump and  Netanyahu wave at the Israel museum in Jerusalem, Tuesday, May 23, 2017. What these two can concoct, with the help of their semi-deranged establishments is something humanity should fear.  (AP Photo/Sebastian Scheiner).

Events of the past few days have made it clear that US imperialism—working in close tandem with its main ally in the Middle East, Israel—is set on a course of direct military confrontation with Iran.

Barely a week and a half before the May 12 deadline for President Donald Trump to announce his decision on whether or not his administration will renew a waiver of unilateral US sanctions that were shelved as part of the 2015 Iranian nuclear agreement, Israel’s Prime Minister Benjamin Netanyahu staged a theatrical presentation claiming to have “proof” that “Iran lied” about its nuclear program. He went on to express confidence that Trump would “do the right thing,” i.e., scuttle the nuclear accord—the Joint Comprehensive Plan of Action, or JCPOA—that was reached between Iran and five major powers: the US, Britain, France, Germany, China and Russia.

Trump hailed Netanyahu’s theatrical presentation as confirmation that he had been “100 percent right” in his denunciations of the nuclear accord as a “horrible deal.”

In reality, international nuclear experts, European representatives and even ex-Israeli intelligence officials all dismissed Netanyahu’s performance as a farce. The Israeli government, which claimed to have stolen hundreds of thousands of files from Iran, produced not a single shred of evidence that Iran has engaged in any form of nuclear weapons program for the past 15 years, much less that it has violated the terms of the JCPOA. Repeated reports by the International Atomic Energy Agency, including one as recent as February, have established that Tehran is abiding by the stringent restrictions on uranium enrichment and intrusive inspections regime imposed under the agreement.

Netanyahu’s performance recalled nothing so much as Colin Powell’s 2003 presentation of what he described as “evidence, not conjecture” of Iraq’s nonexistent “weapons of mass destruction” used to justify the US war of aggression against Iraq a month later. Powell at least told lies that purported to substantiate American false claims of Iraqi malfeasance; Netanyahu presented nothing. 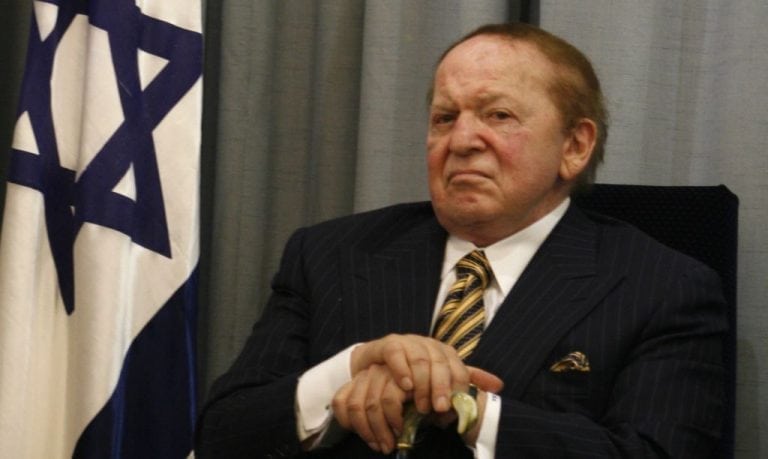 Casino mogul Sheldon Adelson, an uber Zionist, adds pressure for Trump to get involved in ever more reckless moves to please the Neocons and the Israeli lobby (almost congruent).

The Israeli presentation—delivered in English—was stage-managed in direct consultation with Trump, with whom Netanyahu spoke shortly before going on the air, and the new US secretary of state, Mike Pompeo, who had met with him and other officials in Tel Aviv the day before.

Behind all of the chaos and scandals of the Trump administration, what has clearly emerged in Washington is a war cabinet, with the elevation of John Bolton to the post of National Security adviser and Pompeo’s confirmation by the Senate, with the indispensable support of the Democrats, as secretary of state. Both are fervent advocates of war against Iran.

Bolton has described the 2015 nuclear deal with Iran as a “massive strategic blunder,” insisting that US policy should be one of “ending Iran’s 1979 Islamic Revolution before its fortieth anniversary,” next February. Regime change in Tehran, according to the new national security adviser, should be promoted through direct military action. “To Stop Iran’s Bomb, Bomb Iran.” was the headline of an opinion piece he wrote for the New York Times shortly before the agreement was reached on the JCPOA.

The US-Israeli war against Iran has already begun. Strikes carried out by US-supplied Israeli F-15 fighter jets on Syrian military bases on Sunday night killed as many as two dozen Iranians. It marked the fifth round of such Israeli attacks on Syria since September. All of them have been aimed at the assets of Iran. Along with Russia, Tehran is the main ally of the Assad government, which Washington and its allies have sought to topple in a seven-year-old war for regime change.

Reports from Israel have also indicated a major redeployment of tanks, troops and armored personnel carriers to the country’s northern borders with Syria and Lebanon.

“On the list of the potentials for most likely live hostility around the world, the battle between Israel and Iran in Syria is at the top of the list right now,” a senior US official told NBC News Tuesday.

The intimate collaboration between Washington and Tel Aviv in preparing such a war has been made evident by the extraordinary flurry of meetings between top-level US and Israeli military and security officials flying in and out of both countries’ capitals. This has been supplemented by the dispatch of Pompeo, before he even set foot in the State Department, to the Middle East, where he not only consulted with Netanyahu and other officials, but also met with Saudi and Jordanian officials in an attempt to solidify a bloc of reactionary monarchical Arab regimes behind the US-Israeli war drive.

Behind this drive to war lies not any supposed concern about an Iranian nuclear threat—Tehran has no bomb and never initiated any real program to produce one, while Israel’s own arsenal includes an estimated 200 to 400 nuclear warheads. Rather, what are at play are naked imperialist interests.

As a regional power, Iran stands as an impediment to the drive by US imperialism to assert its hegemony over the oil-rich and strategically vital Middle East.

The European powers are increasingly at odds with Washington. After the visits of France’s Macron and Germany’s Merkel apparently failed, despite their obsequiousness, to persuade the Trump administration not to blow up the Iranian nuclear accord, discussions between them and British Prime Minister May over the weekend apparently centered on whether or not there was any prospect of salvaging the agreement without the US. There are both the fear of a major regional war spilling over into Europe in the form of violence, political crisis and a renewed flow of refugees, as well as definite profit interests at stake.

While US banks and corporations have been largely locked out of the Iranian market by continuing nonnuclear-related US economic sanctions, European interests, including the French oil conglomerate Total, have signed lucrative agreements. Most of them have produced little thus far because of fears that Washington will upend the nuclear accord and begin sanctioning foreign firms doing business in Iran.

Filling this vacuum, China has forged significant economic ties with Iran, including a recent $10 billion line of credit from the Beijing government for Chinese firms to launch infrastructure projects, including power facilities, dams and transportation hubs. Beijing sees Iran as a key segment of its “Belt and Road” mega-project, linking China to Europe, and is anxious to shift a growing share of its oil imports from regional producers like Saudi Arabia that are aligned with Washington. In 2016, Chinese President Xi Jinping and Iranian President Hassan Rouhani announced plans to increase bilateral trade to $600 billion over the next decade.

In Iran, as elsewhere, US imperialism seeks to counter the decline of its economic domination through a turn to military aggression. While the European capitalist powers have joined in US military actions, particularly with the participation of the UK and France in the April 14 missile attack on Syria, their hopes of reaping a share of the booty from imperialist intervention can never be realized by serving as the tail of the American dog. Inevitably, they must turn to their own rearmament for a struggle of each against all for the redivision of the world. This process is already well under way.

To the extent that Washington has sought to placate Europe with the postponement of the implementation of trade war tariffs and that it has ratcheted down, temporarily, tensions on the Korean peninsula, it is to better concentrate war preparations in the Middle East.

The drive toward a war between Israel and Iran, beginning in Syria, is unfolding in tandem with the continuing US military intervention in that country, which is evolving into a confrontation with pro-government forces backed by Iran and Russia.

Defense Secretary Gen. James Mattis Monday indicated that the more than 2,000 US troops presently deployed inside Syria would not be going anywhere anytime soon. “We do not want to pull out before the diplomats have won the peace,” he said. “You win the fight—and then you win the peace.”

The reality is that the US military force, augmented by proxy ground forces based upon the Syrian Kurdish YPG militia, is staying in place to secure an American zone of influence consisting of approximately a third of Syria’s territory on its northeastern borders with Turkey and Iraq. The area also contains the country’s oil and gas reserves. From their supposed mission of fighting ISIS, this US force is now turning to confronting attempts by the Syrian government, backed by Russia and Iran, to regain control of this territory and its resources.

With Russia also in discussions with Damascus on providing advanced air defense systems to Syria, the prospect for a clash between Russian forces and those of the US and Israel are steadily growing.

The developments in Syria and the threats of confrontation with Iran constitute a grave warning to working people in the US and throughout the world. Driven by the crisis of its system, world capitalism, with America’s ruling class and its military in the lead, is preparing for a world war that would be fought with nuclear weapons.

ABOUT THE AUTHOR
Bill Van Auken is a senior editor with wsws.org, a Marxian publication.

OPINION: Trump and Netanyahu, the Con Artists Cooking Up Cataclysmic Conflict With Iran