Home ABOMINATIONS Syrian ambassador says it all in just one paragraph.

Syrian ambassador says it all in just one paragraph. 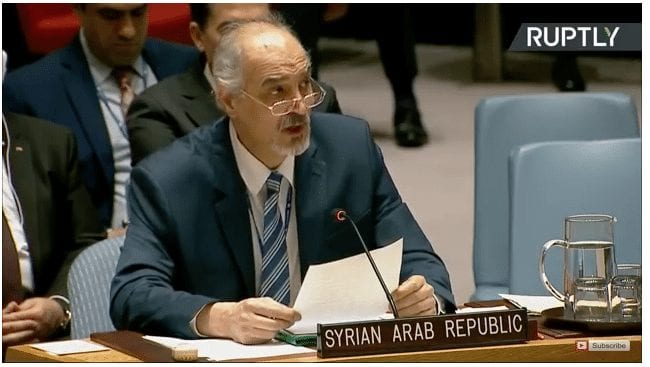 If published in the New York Times, which daily dedicates acres of newsprint to fluff and outrageous warmongering lies of utility only to the world plutocracy it serves (later amplified by the rest of the prostituted mainstream media), statements like Amb. Jaafari's would go a long way to restore sanity and honesty in the affairs of nations. It would take less than one inch in any of the broadsheet's pages. Yes, the truth is simple, direct and concise. It does not require tons of artifice and embellishment. But it won't happen. For the simple reason the New York Times—as we all know so well— and its fellow capitalist media are not really news media but —in regard to all topics of vital interests to humanity—propaganda platforms in the west's Ministry of Truth.

9 April
Jaafari: Some permanent members have become professional liars. Through lying Palestine was occupied and the war in Korea fueled, through lying they invaded Vietnam & Grenada, occupied Iraq and destroyed Libya, and through lying they will create a pretext to invade Syria pic.twitter.com/xE7a8E8eWa

UNSC meets to discuss reports of chemical attack in Syria

The Apprentice: the Education of Mohammed bin Salman