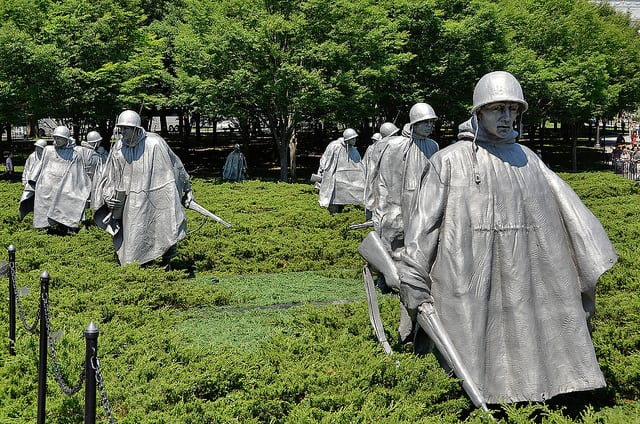 The monument to GIs who fought in the Korean War in the 1950s unwittingly memorialises one of America's earliest imperialist genocides since the close of WW2. While about 50,000 Americans died or were MIA, the Korean people bled to the tune of millions. Huge garrisons still maintain the empire's military grip on the peninsula, and it's not out of kindness toward the Koreans.

There are times when a self serving incompetent buffoon with a short attention span may do the whole world a favor, and deserve our thanks. This might be one of them. Donald Trump’s absurd fire-and-fury my-button-is-bigger-than-your-button rhetoric shoved his foot down the presidential throat clear to the ankle bone. The only graceful (and self serving and short-sighted) way out was to allow South Korea’s puppet government to make peace with North Korea.

Calling South Korea’s government a “puppet” is no exaggeration. Until December 1994 , US commanders held day to day operational control over South Korean forces. To this day, treaties between the US and South Korea surrender immediate command and control of all South Korean military assets and forces to American officers not Korean ones in case of war. The South Korean army is still a Pentagon sock puppet.

By allowing Koreans to make peace Trump deftly removed the foot from his mouth, and gets credit for doing something neither Obama nor the Clintons would have dared attempt. Peace between the Koreans is an unambiguously good thing for them and for everybody, so we can all thank Trump for that one. Korea was one nation for centuries, but only divided by the US since World War 2.

Cable news coverage never mentions that there are 15 US military bases on Korean soil, housing anywhere from 30 to 40,000 US troops, probably nuclear armed. The largest, Camp Humphreys is in the middle of scandal-ridden expansion plans to hold 40,000 US personnel in that one spot alone, all paid for by South Korean taxpayers, not American ones. South Korean civil society has long resented its American overlords and their military presence. Left leaning governments in the early 1990s yielded to public pressure in 1994 and finally insisted on transferring peacetime the South Korean military to South Korea. Making formal peace with the north will encourage civil society and the current south Korean government to further pursue their goal of total South Korean control over its own military establishment.

This is great for Koreans too, and we should thank Trump again, because it’s not so good for the empire.

With the US-imposed pretense of hostilities between the two Koreas gone the pressure will inevitably double and redouble to evict all US troops from South Korea. The real reason for their presence has never had anything to do with North or South Korea. US troops in Korea are part of the ring of steel, including 23 US bases in Japan with another 30,000 personnel, not counting the 40,000 sailors and Marines of the nuclear armed US 7th Fleet with hundreds of aircraft, carrier battle groups, submarines and extensive amphibious and surface warfare assets stretching all the way down from Japan to its other bases in Australia and around to Diego Garcia in the Indian Ocean.

The US ring of steel and nukes in the Western Pacific from Japan to Australia to Diego Garcia is about doing the same thing the Brits tried to do in the couple centuries of their empire – controlling the Asian mainland – today chiefly Russia and China from the sea. US troops and bases in Korea are the only portion of the ring of steel actually on the Asian mainland. To extract himself from his self made Korean problem, Trump has critically undermined the empire’s ring of steel. This too is good for humanity, and we should thank the incompetent president again.

It’s an error that more competent imperialists like Obama and the Clintons would never make. In fact the Obama State Department helped rig elections in Japan to bring the current right wing government to power there, which is intent upon greatly expanding Japan’s military and reviving Japanese militarism, which colonized Korea at the beginning of the 20th century, and in World War 2 killed 20 or 30 million Chinese and invaded every nation on the Western Pacific rim down to Malaysia, the Philippines and Vietnam. Say what you like about the treaty that ended World War 2 in the Pacific, but putting the Japanese military out of business for seventy-five years was an immeasurable service to humanity.

Lucky for us, Donald Trump doesn’t read his Pentagon briefings or much of any history, and they don’t show maps on Fox and Friends.

So you see, a careless buffoon with a short attention span can sometimes do a lot of accidental good for the world, if he already happens to be President of the United States.

Remember, Black Agenda Report is the only outfit run by African Americans and directed at black audiences which was targeted as fake news under the influence of the Russians. As a result, Google suppresses our articles in its search results. So the only way you can be sure to get news, commentary and analysis from the black left every week is to subscribe to our free weekly email at our web site, and www.blackagendareport.com.

Bruce A. Dixon is managing editor at Black Agenda Report, and a state committee member of the GA Green Party. Contact him via email at bruce.dixon@blackagendareport.com .

Karl Marx: ‘ruthless criticism of all that exists’