US and Israeli Ziofascists Partner in State Terror Against Palestinians 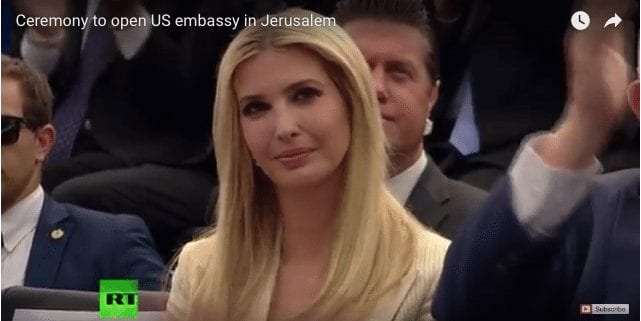 Israel gets away with mass murder and much more because Washington supports and encourages its ruthlessness.

Both nations partner in each other’s high crimes – raging on Monday in besieged Gaza. As of 4:00 PM local time, 44 Palestinians were murdered in cold blood by Israeli snipers, another 1,700 injured, many seriously – the death and injury toll sure to rise.

Trump and other administration Ziofascists are ruthlessly contemptuous of Palestinian rights. They deplore peace and stability, instigating and supporting endless violence and chaos. In a recorded message from Washington during the ceremonial opening of the US embassy in Jerusalem, Trump disgraced himself more than already, saying:

“The United States remains fully committed to facilitating a lasting peace agreement. The United States will always be a great friend of Israel and a partner in the cause of freedom and peace.” As his message was aired, Palestinians were being gunned down in cold blood – Trump, other administration officials, congressional Republicans and undemocratic Dems, along with the world community remaining indifferent to the suffering of a long-beleaguered people.

According to Palestinian media, Monday Palestinian casualties include about 800 shot with live rounds (including internally exploding dum dum bullets), around 90 seriously wounded – 65 of them shot in the head and/or neck, about 50 in the chest or back, most others in the legs. Journalists, medical personnel and an ambulance were targeted. Gaza’s Health Ministry called on Egypt to send urgently needed surgeons, intensive care physicians, anesthesiologists, other medical personnel and supplies to deal with the overwhelming casualty toll Gaza can’t handle on its own.

Palestinian Center for Human Rights’ fieldworkers in the Strip reported “continuously fired live and rubber bullets, tear gas canisters and artillery shells at the whole area, and not only at Gazans” within a few hundred meters of the border fence or closer. Earlier in the day, the PCHR said eight journalists and 11 medical workers were wounded, including one of its fieldworkers.

“Ambulances, medical staff, and field clinics were deliberately and directly targeted and prevented from approaching those wounded in addition to causing injuries among them” – journalists targeted the same way. The death toll from Monday alone is certain to rise. Israeli viciousness flagrantly violates international law – nothing ever done to hold its culpable officials accountable for their high crimes.

Bloody Tuesday, Nakba Day, is likely to follow bloody Monday. While Israeli and US officials celebrate the opening of Washington’s Jerusalem embassy, along with invited guests, Palestinians are being gunned down in cold blood.

An entire population is suffering under oppressive Israeli militarized occupations – besieged Gazans most of all.

Enough is Enough. The Time Has Come to BDS the US.

Usually, only the high priest is allowed to slaughter the ‘lambs’. Now a large number of Palestinians are being sacrificed to appease the Trump gods.