Home ABOMINATIONS A Better Idea Than Russia Returning to the G7

A Better Idea Than Russia Returning to the G7 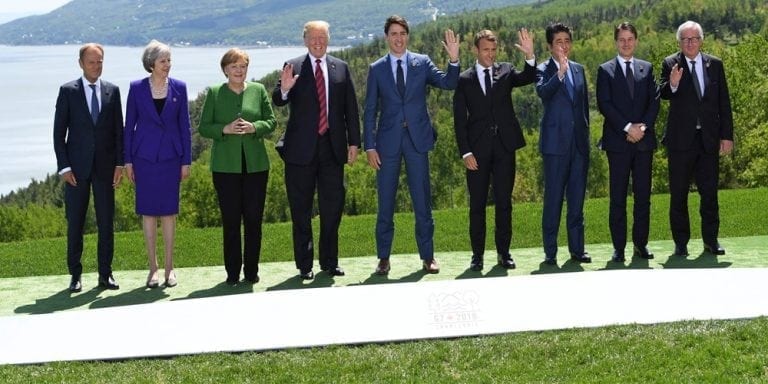 Before heading to La Malbaie, Quebec, Canada for this year’s G7 summit, he called for Russia’s inclusion again, restoring the G8.

“(W)e should have Russia at the negotiating table,” he said. Italy’s new Prime Minister Giuseppe Conte tweeted the same message, separately calling for ending sanctions on Russia – illegally imposed, he failed to explain.

The G7, G20, IMF, World Bank, the European, Asian and Latin American Development Banks, the “boss of bosses” Bank of International settlements, the Fed and other major central banks, the UN, OECD, World Trade Organization, and other major international institutions are instruments of privilege over governance serving everyone equitably – an anathema notion to powerful money masters.

A (nonexistent) world of dominant just societies wouldn’t tolerate serving privileged interests exclusively at the expense of most others. Globalization is a racket, the flip-side of governance the way it should be, a coup d’etat against popular interests, a giveaway to banksters, a neoliberal ripoff, a freedom and ecosystem destroying nightmare.

Michael Parenti earlier called globalization a means of “turning the clock back on many twentieth-century reforms: no freedom to boycott products, no prohibitions against child labor, no guaranteed living wage or benefits, no public services that might conceivably compete with private services, no health and safety protections that might cut into corporate profits.”

Their interests matter most at the expense of consumer rights, democratic values, ecosanity, human health and welfare.

A globalization rule of thumb is whatever government does, business does better so let it – privatization for maximum profits over serving the public welfare. NAFTA and similar trade deals are hugely destructive, eliminating millions of jobs, offshoring countless numbers of them to low-wage countries, notably once-high-wage manufacturing ones, replaced by largely temp employment paying poverty wages.

The scheme includes cutting, then ending welfare for impoverished households, restricting then eliminating food stamps and housing assistance, destroying the remnants of collective bargaining, turning workplaces into sweatshops, paying workers poverty wages, abolishing benefits, allowing child labor, agricultural and other slave labor more than already, privatizing the remnants of Social Security and Medicare, turning them into a Wall Street profit center, along with other dystopian schemes.

Societies would be far better off without the G7, G20, and other exploitive international institutions, serving privilege over governance for everyone equitably. Replacing them with social justice institutions is needed, progressivism over governance for the privileged few at the expense of most others, economic development lifting all boats over carving up whole continents for profit, world peace instead of endless wars.

Societies safe and fit to live in are needed, not the way things are in the West and most elsewhere.

A global race to the bottom continues, heading for dystopia worldwide if not challenged and changed.

Hassan Nasrallah on Israeli Warmongering & US Sanctions: Hezbollah Stronger than Ever, Resistance Not For Sale