Home ABOMINATIONS On the matter of Soros: Unrequited Love Note to the Washington Post

On the matter of Soros: Unrequited Love Note to the Washington Post 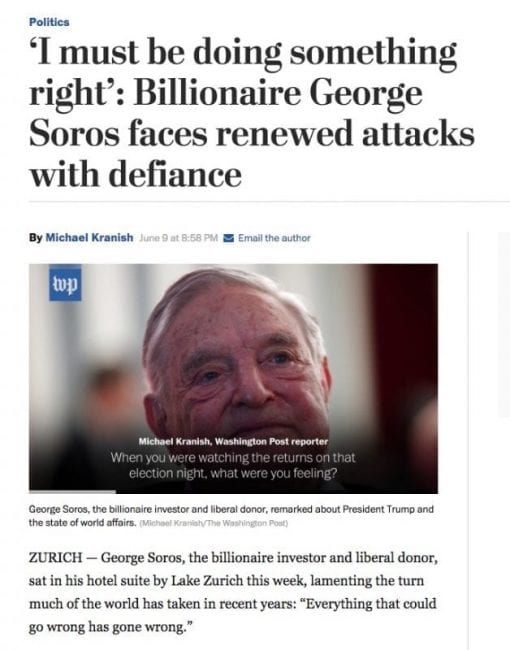 EDITOR’S INTRODUCTION: An article in the Washington Post on Sunday eulogized George Soros, and in describing his past, it stated that he is “a Holocaust survivor,” even though he’s not. One of our authors, Eric Zuesse, therefore sent the following email to the newspaper’s Editor, as well as to the author of this Soros-eulogy, requesting that it be corrected — but he went even further:

To: Martin Baron [Editor of the Washington Post], and Michael Kranish [author of the WParticle that I seek to be corrected]

Please rectify your error “The 87-year-old Holocaust survivor”, because he [Soros] was never in the Holocaust. And will you please tell me how the Washington Post editors let that blatant falsehood through? Obviously, a falsehood that easily recognizable and that prominent, is an extremely black mark against the institution, the management especially. It’s one thing to have a low-quality journalist who makes assertions that he hasn’t verified; it is far worse to have managers who hire, and retain such journalists, in their employ.   The problem here is more at the managerial level than below, at the staff level. It reflects damningly on both the managerial operation and the editorial operation. This is especially egregious for a news-medium that introduced the PropOrNot fakery and that repeatedly pontificates against ‘fake news’ (of which this article should be a prime example — as well as being stenographic ‘journalism’ and thus self-disqualifying as being anything other than PR, propaganda). Obviously, the ‘journalistic’ standards there are extremely poor. This falsehood, and the entire article, is just egregious, on many levels.

EDITOR’S CLOSE: As TGP (and a very small handful of other counter-establishment sites) has documented extensively, the mainstream media’s role is first and foremost to disseminate the corporate status quo’s version of reality, which in almost all cases implies gross omissions of truth, half-truths and outright disinformation. This is done consciously, consistently and cynically, across the entire spectrum of the American media (and across much of the media in Washington’s vassal states), and it is no longer a fact subject to debate. The purpose of that fakery is to prop up and advance the global capitalist project, which the US ruling cliques manage on their behalf and that of every other affiliated plutocracy. It is therefore rather significant that even in this horrendous Orwellian cesspool, the Washington Post (now owned by Jeff Bezos, whose Amazon supplies, exclusively, to the CIA and NSA and Pentagon, Amazon’s cloud-computing services), manages to stand out, for its sociopathic support of the Deep State’s goals of permanent war and Russophobia (both epitomized in Mr. Soros), not to mention every political measure designed to diminish or wipe out the remnants of functional democracy in the United States.
Patrice Greanville
greanville@gmail.com

ERIC ZUESSE, Senior Contributing Editor •  Investigative historian Eric Zuesse is the author, most recently, of They’re Not Even Close: The Democratic vs. Republican Economic Records, 1910-2010, and of CHRIST’S VENTRILOQUISTS: The Event that Created Christianity. Besides TGP, his reports and historical analyses are published on many leading current events and political sites, including The Saker, Huffpost, Oped News, and others.
PATRICE GREANVILLE is TGP’s editor in chief.

CHURCHILL AND WORLD WAR TWO: The Man and the Myth.