US Ambassador to Israel Tells Journalists Who Report Truth About Gaza: ‘Keep Your Mouths Shut’ 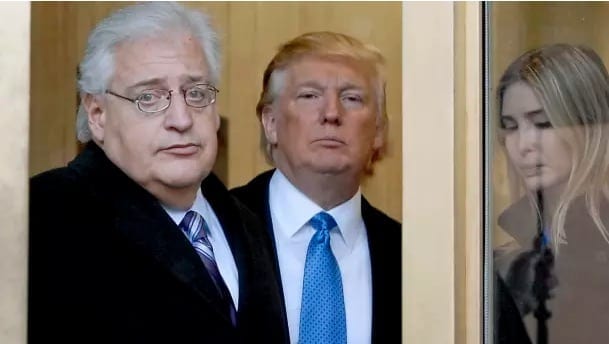 Zionist Team Trump: Friedman, Trump and Ivanka. This is a very peculiar picture that leading Israeli paper Haaretz ran for this lead story, What Do We Know About David Friedman, Trump’s Pick for Ambassador to Israel? (Dec. 16, 2016)

David Friedman insisted that American news coverage is biased against Israel, but media analysts have concluded that the precise opposite is the case.

U.S. Ambassador to Israel David Friedman has a message for journalists who dare to report the truth about Israel’s ongoing massacre of nonviolent demonstrators in Gaza: “Keep your mouths shut.”

Friedman’s “anti-democratic demand” came during his speech at a media conference in Jerusalem on Monday, in which he complained without evidence that “nine out of ten articles that are written about the Gaza conflict are critical of Israel.”

“Just keep your mouths shut until you figure it out,” Friedman told reporters. “Because otherwise, all you’re doing is creating impressions that have no basis in fact. They fit a narrative. They fit an opinion. They fit an agenda. But it’s not reporting, because it’s not based on hard, factual analysis.”

Friedman’s stream of inappropriate comments rolls along. This time, it’s an anti-democratic demand for journalists to “keep [their] mouths shut.”https://t.co/ovUTLOhFf5

While Friedman insisted that the media, and the U.S. media in particular, was biased against Israel in its coverage of the Israeli military’s murder of over 60 unarmed Palestinian protesters last month—a massacre that prompted a U.N. war crimes probe—independent analysts have come to the precise opposite conclusion.

Citing a example passages from the New York Times, the Washington Post, Bloomberg, and several other major news sources, Gregory Shupak argued in an analysis for Fairness and Accuracy in Reporting (FAIR) last month that American corporate outlets almost invariably take Israel’s side while effectively “blaming Palestinians for their own slaughter.”

“Based on media coverage,” wrote Shupak, “readers could be forgiven for concluding that it was Palestinians, not Israel, who carried out what Doctors Without Borders called ‘unacceptable and inhuman’ violence.”

Stories published in our Daily Digests section are chosen based on the interest of our readers. They are republished from a number of sources, and are not produced by MintPress News. The views expressed in these articles are the author’s own and do not necessarily reflect MintPress News editorial policy.

Hassan Nasrallah on Israeli Warmongering & US Sanctions: Hezbollah Stronger than Ever, Resistance Not For Sale

CHURCHILL AND WORLD WAR TWO: The Man and the Myth.