Home AMERICAN BRAINWASH G7 vs. G6+1 – The War of Words 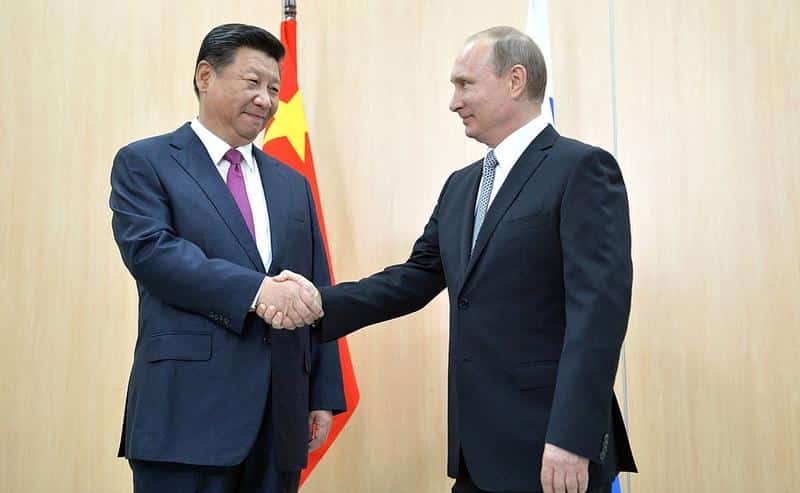 Putin and Xi—Statesmen for a new era Will they fall for the traps being set by the West? Unlikely, but in this fluid world anything is possible.

The war of words has intensified between the U-S and G-7 allies after President Donald Trump retracted his endorsement of the communiqué of the once-united group.

The German chancellor called Trump's abrupt revocation of support for a joint communiqué sobering and depressing. Angela Merkel however said that's not the end. France also accused Trump of destroying trust and acting inconsistently. Trump pulled the U-S out of the group’s summit statement after Canada’s Prime Minister Justin Trudeau announced the imposition of retaliatory tariffs on the U-S. The White House said Canada risked making the U-S president look weak ahead of his summit with the North Korean leader. But, Canada’s Foreign Minister Chrystia Freeland later reiterated that her country will retaliate against U-S tariffs in a measured and reciprocal way.

PressTV:
What do you make of Mr. Trump’s decision to renege on the G7’s final statement?

PK:
Trump pulling out from the final G7 statement is just show; the usual Trump show. He signed it, then he pulled out. We have seen it with the Iran Nuclear Deal, with the North Korea meeting, on and off, with the tariffs – first – about two months ago – the tariffs were on for Europe, Mexico and Canada, as well as China – then they were off for all of them – and now they are on again…

How serious can that be? – Trump just wants to make sure that he calls the shots. And he does. As everybody gets nervous and talks about retaliation – instead of practicing the “politics of silence” strategy.

In the case of Europe, the tariffs, or the equivalent of sanctions, as Mr. Putin recently so aptly put it, may well serve as a means of blackmailing Europe, for example, to disregard as Trump did, the Iran Nuclear Deal, “step out of it – and we will relieve you from the tariffs.”

In the case of Canada and Mexico, it’s to make sure Americans realize that he, Mr. Trump, wants to make America Great again and provide jobs for Americans. – These tariffs alone will not create one single job. But they create an illusion and that – he thinks – will help Republicans in the up-coming Mid-term Elections.

In China – tariffs are perhaps thought as punishment for President Xi’s advising President Kim Jong-Un ahead of the June 12 summit – and probably and more likely to discredit the Yuan as a world reserve currency, since the Chinese currency is gradually replacing the dollar in the world’s reserve coffers. But Trump knows that these tariffs are meaningless for China, as China has a huge trade surplus with the US – and an easy replacement market – like – all of Asia.

PressTV:
How could the silence strategy by the 6 G7-partners have any impact on Trump’s decision on tariffs?

PK:
Well, the G6 – they are already now considered the G6+1, since Trump at the very onset of the summit announced that he was considering pulling out of the G7. – So, the remaining 6 partners could get together alone and decide quietly what counter measures they want to take, then announce it in a joint communiqué to the media.

It does not have to be retaliation with reciprocal tariffs, it could for example be – pulling out of NATO – would they dare? – That would get the world’s attention. That might be a much smarter chess move than copying the draw of one peon with the draw of another one. Because we are actually talking here about a mega-geopolitical chess game.

What we are actually witnessing is a slow but rapidly increasing disintegration of the West.

Let’s not forget, the G7 is a self-appointed Group of the “so-called” world’s greatest powers. – How can that be when the only “eastern power”, Russia, and for that – much more powerful than, for example, Canada or Italy, has been excluded in 2014 from the then G8?

And when the world’s largest economic power – measured by the real economic indicator, namely purchasing power parity – China – has never been considered being part of the G-Group of the greatest?

It is obvious that this Group is not sustainable.
--

We have to see whatever Trump does, as the result of some invisible forces behind the scene that direct him. Trump is a convenient patsy for them, and he plays his role quite well. He confuses, creates chaos – and on top of it, he, so far single handedly wants to re-integrate Russia in the G-7 – i.e. the remaking of the G-8.

So far the G6’s are all against it. Oddly, because it’s precisely the European Union that is now seeking closer ties with Russia. – Maybe because they want to have Russia all for themselves?

If that is Trump’s strategy to pull Europe and Russia together, and thereby creating a chasm between Russia and China – then he may succeed. Because the final prize of this Trump-directed mega political chess game – is China.

Trump, or his handlers, know very well that they cannot conquer China as a close ally of Russia. So, the separation is one of the chess moves towards check-mate. But probably both Presidents Putin and Xi are well aware of it.

In fact, the SCO just finished their summit in China’s Qingdao on 9 June, about at the same time as the G7 in Canada’s Charlevoix, Quebec Province, and it was once more very clear that this alliance of the 8 SCO members is getting stronger – and Iran is going to be part of it. Therefore, a separation of Russia from the Association is virtually impossible. We are talking about half the world’s population and an economic strength of about one third of the world’s GDP, way exceeding the one of the G7 in terms of purchasing power.

This, I think is the Big Picture we have to see in these glorious G7 summits.