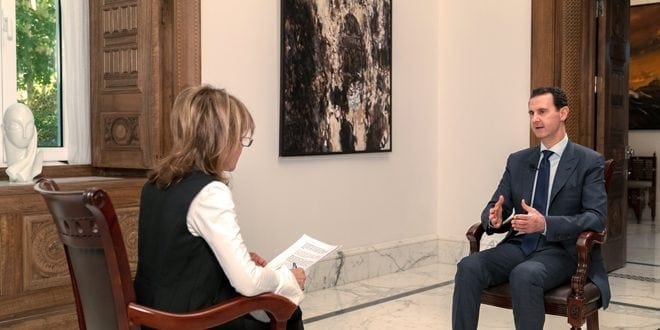 Unlike duplicitous Western leaders, notably US and UK ones, Assad says what he means and means what he says – why it’s always refreshing to follow his remarks when interviewed or in public statements.

Interviewed by London Daily Mail reporter Hala Jaber in Damascus, he was asked if Britain was involved in staging the (false flag) April 7 CW attack in Douma.

He minced no words saying: “Definitely, without a doubt. Britain, France, and the US are following and adopting the same policy.”

“That said, to be completely frank and stark, Britain and France are political satellites to the US. The UK publicly supported the White Helmets that are a branch of al-Qaeda, al-Nusra, in different areas of Syria.”

Tories “spent a lot of money, and we consider the White Helmets to be a PR stunt by the UK. So yes, definitely, it was staged by these three countries together, and the UK is involved.”

He’s absolutely right. I made similar comments many times. No evidence indicates CW use by Syrian forces ever throughout years of war. Plenty of evidence proves they’ve been used many times by US/UK/French/Israeli/Saudi supported terrorists.

“(W)e didn’t see any chemical attack (in Douma). It didn’t happen. It was a lie, especially after we liberated that area, our information confirmed that that attack did not take place.”

“The British government should first prove with evidence that the attack happened, and then they should prove who is responsible. This did not happen.”

Asked how UK involvement in airstrikes on Syria isn’t justified under international law (on the phony pretext of responsibility to protect), Assad stressed Theresa May’s regime “lie(d).” “(W)e didn’t see any chemical attack (in Douma). It didn’t happen. It was a lie, especially after we liberated that area, our information confirmed that that attack did not take place. The British government should first prove with evidence that the attack happened, and then they should prove who is responsible. This did not happen.”
“They keep failing, they keep telling lies, and they continue to play a war of attrition against our government.”

Assad is right. In March 2011, the Obama regime launched naked aggression on Syria, wanting its government toppled, using ISIS and other terrorists as imperial foot soldiers, aided by US-led terror-bombing since June 2014.

Commenting on US/UK regional intervention with their imperial allies compared to Russia’s involvement in Syria, Assad explained Moscow was invited. Its operations are legal under international law.

Illegal intervention in Syria or anywhere else isn’t about Trump, May and their allied leaders, he stressed.

It’s the belligerent agenda of “Western regimes” no matter who leads them. “They don’t accept anyone who has a different point of view, any country, any government, any personality.”

“That’s the case with Syria. (It’s) very independent in its political positions. We work for our national interests. We’re not a puppet state.”

“They don’t accept this reality. So, the whole approach toward Syria in the West is ‘we have to change this government. We have to demonize this president because they don’t suit our policies anymore.’ “

“This is the situation. Everything else is like flavors. They tell lies. They talk about chemical weapons. They talk about the bad president killing the good people, freedom, peaceful demonstration. All these lies are flavors for the main goal, which is regime change.”

It’s what “colonial policy” is all about, one or more nations wanting to dominate and exploit others forcefully.

Assad stressed the scourge of terrorism is “spreading all over the world because of the chaos that is supported by the West in Syria.”

Syria along with Russia, Hezbollah and Iranian military advisors are key players in combating regional terrorism, Assad explained – the scourge “support(ed) by the Americans” and their rogue allies.

Countering the anti-Assad Western narrative, he said “(i)t  doesn’t even hold together. I mean the different factors of this narrative, it’s not logical. It’s not realistic.”

“(T)his president is in his position because he has the support of his own people. So how could he have this support while he’s killing these same people? So, the story is not correct. We are fighting the terrorists, and those terrorists are supported by the British government, the French government, the Americans and their puppets whether in Europe or in our region.  We are fighting them, and we have public support in Syria to fight those terrorists. That’s why we are advancing. We cannot make these advances just because we have Russian and Iranian support.”

“They cannot substitute the popular support, and the proof of what I’m talking about: Shah of Iran, the Western puppet, he couldn’t withstand the backlash of the Iranian people, and he collapsed. The whole system collapsed in a few weeks, and he had to flee his country.”

Assad is right, official narrative disinformation proliferated by the West, Israel and media scoundrels supporting them reflect the US-led diabolical agenda for regional and global hegemony.

Throughout years of war, “the Americans and their allies haven’t stopped threatening Syria,” Assad stressed.

“This is our land and this is our duty. It’s not a political opinion. It’s a national duty. We’re going to advance in that direction regardless of the military or political position of our adversaries.”