Even leftists have the right to smile.
PATRICE GREANVILLE 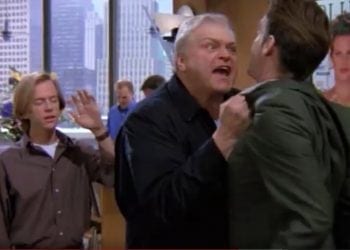 “Lissen you homophobe! The term is gay…gay!”

This is easily one of the funniest episodes in the TV comedy series JUST SHOOT ME.
What was this show about? Here’s a capsule description:
Hot-tempered journalist Maya Gallo got herself fired from yet another job when she made an anchorwoman cry on the air with some gag copy on the teleprompter. Unable to find a job anywhere else and facing eviction, she is forced to go work for Blush, her father’s fashion magazine. Personality conflicts quickly ensue with high-strung ex-model Nina van Horn, philandering photographer Elliot, and wise-guy secretary Dennis Finch.

More details about the show, cast, etc, on IMDb.

This particular episode is #13 in Season 2.  It aired on Jan. 27, 1998.
Brian Dennehy actually makes an uncredited appearance playing Dennis Finch’s firefighter father, Red Finch. He makes an unforgettable first appearance with an axe. Red is convinced Dennis is gay after watching a television movie. Dennis tries to convince him he’s straight. The Finchs are firefighters in upstate Albany, New York. Dennis is the complete opposite of his father and brothers. He works as an administrative assistant or secretary to Jack Gallo at Blush fashion magazine. Dennis is short and slim. When you watch the ending, you see how it all comes together and how the truth finally comes out in the Finch family with the final line, ” Pass the Salt.” It’s Dennehy’s first appearance in the series and it’s always unforgettable.

Ten Years On, Putin Told Them So

Facebook Is Teetering at the Top of the Beanstalk