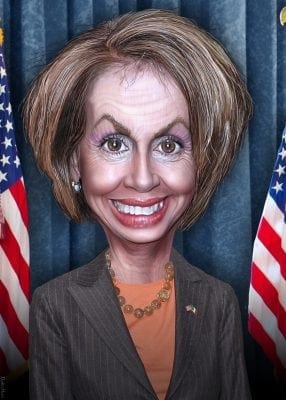 Pelosi: a typical Democrat malignancy. But the problem is with the counterfeit duopoly, and a regime which is not a real democracy.

Which is worse: The specter of nuclear war, or giving US president Donald Trump credit for a significant diplomatic accomplishment?

In her official statement on Trump’s Singapore summit with North Korea’s Kim Jong-un, US House Minority Leader Nancy Pelosi makes it clear that a few million incinerated human beings are a small price to pay  to keep the 68-year-old Korean War going. Maybe not forever, but at least until there’s a Democrat in the White House.

“[T]he President handed Kim Jong-un concessions in exchange for vague promises that do not approach a clear and comprehensive pathway to denuclearization and non-proliferation,” Pelosi complains.

What were these dangerous “concessions?”

First, the US armed forces will, conditional upon progress toward North Korean denuclearization, stop conducting the threatening military exercises that they’ve conducted on North Korea’s border and off its coast since the 1953 ceasefire. Some “concession.” If  US and South Korean forces aren’t prepared for a new outbreak of hostilities after 65 years of training, they never will be.

Secondly, again conditional upon North Korea holding up its end of the developing bargain, the US will provide “security guarantees.” Which means, the US and South Korea won’t invade North Korea, just like they haven’t invaded North Korea since 1953. Again, some “concession.”

Would a Democratic president, at the kind of summit with North Korea’s ruler that Trump managed to swing — unlike any past president, Democrat or Republican — have refused those two obvious first-step “concessions?” Not a chance. They were the bare minimum, and if a Democrat had offered them, Pelosi would have publicly celebrated them as like unto the Second Coming.

“President Trump elevated North Korea to the level of the United States while preserving the regime’s status quo,” Pelosi continues, ignoring the fact that every president since Eisenhower has “preserved the regime’s status quo” — until Trump, who recognized, diplomatically speaking and in relation to the issue at hand, that North Korea is already at “the level of the United States.”

If the Korean War is going to be sorted out, it will be the belligerents — North Korea, South Korea, China and the United States, likely with significant input from Russia — doing the sorting.

But Pelosi,  the Democratic Party, and the party’s allies in the media, would rather it NOT get sorted out.

Posturing America as “the exceptional nation,” Kim as a supplicant in rags, and those other governments as mere hangers-on could have had only two possible outcomes. One was the status quo ante.  The other — a danger faced by then-president Barack Obama in negotiating the Iran nuclear deal — was those other parties negotiating their own deal, leaving a petulant, marginalized America to watch their parade from the sidelines.

A genuine and durable peace on the Korean peninsula may or may not be achievable, but Trump seems to be giving it the old college try. Pelosi and her party, having proven unable to  lead and unwilling to follow on the matter, should at least have the decency to get the hell out of the way.

ABOUT THE AUTHOR
Thomas L. Knapp is director and senior news analyst at the William Lloyd Garrison Center for Libertarian Advocacy Journalism (thegarrisoncenter.org). He lives and works in north central Florida.