Redacted: Abby Martin & The Neo-Liberal Plan To Bring Down VenezueIa

Be sure to share these materials with friends, kin and workmates.

Lee Camp, Abby Martin and Mike Prysner debunk the mainstream media's grotesquely mendacious narratives about the situation in Venezuela, and that includes lacerating critiques of people like HBO comedian John Oliver, whom many young people regard as a source of reliable news about the world. 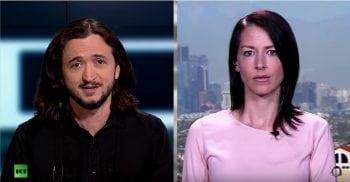 Lee Camp speaks with Abby Martin journalist and host of The Empire Files, who exposes the profit-driven bias of corporate media reporting on Venezuela. Then, he sits down with the hosts of Watching The Hawks to discuss their recent trip to Australia. ~ Redacted Tonight is a comedy show written and performed by Americans, in America covering American news.

NOTE: In the above interview Abby refers to a special program done by Empire Files to refute John Oliver's egregious lies about Venezuela. This is the program, and it certainly deserves to be seen on its own solid merits. The video was prepared by Iraq vet Mike Prysner, whom we salute for this superb job, and his liberating work in general.  We are heartened that America still produces people like him . —PG

The week of Venezuela's presidential election, John Oliver dedicated an ENTIRE episode of his HBO show "Last Week Tonight" to the country—full of distortions and highly misleading to progressive-minded people. Responding to Oliver's major points, Empire Files producer Mike Prysner walks us through the most glaring omissions and misrepresentations. This video response is an essential guide for progressives to understand the reality in Venezuela, the most common myths used to discredit the Chavez movement, and the role of the US government. [[ Prysner is an Iraq war veteran and journalist. He spent a month in Venezuela during the height of the protest movement in 2017, covering the riots and economic crisis. He has been a Venezuela solidarity activist since 2006. Watch the many documentaries and interviews he produced from Venezuela at TheEmpireFiles.tv ]]