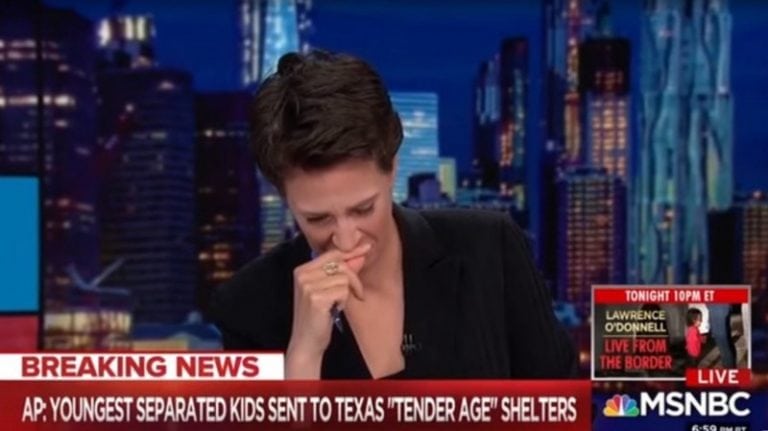 Last night Rachel Maddow finally took a break from her relentless warmongering toward Russia, Syria and North Korea to have a pretend cry about the plight of immigrant children on her hit MSNBC show. It was arguably the climax of a loud nationwide outcry against a federal policy of separating parents from their children when they are arrested for illegally crossing the border from Mexico into the United States, and the following day President Trump signed an executive order suspending that policy while congress comes up with some less draconian legislation.

And of course the entire thing was phony from top to bottom. The policy Trump’s political opponents have been blaming on the current administration was actually bipartisan and several administrations in the making, and as with many US policies simply grew progressively more depraved with each new president. The executive order leaves the debate over many, many immigration issues still unresolved, including the fact that it just means families will now be imprisoned together under Attorney General Jeff Sessions’ new “zero tolerance policy”, and the fact that thousands of families will still remain separated. And of course the entire furor only became a mainstream issue because midterm elections are coming up and the “Russia, Russia, Russia” platform of the last year and a half hasn’t exactly energized the Democratic party’s base. And of course that soulless bitch Maddow, who will cheerfully help inflame tensions between nuclear powers in order to give her ratings a bump, was 100 percent acting throughout the entire scene.

But you know what? I’ll take it.

I don’t normally comment on US immigration policy. My haters are always whining that I, an Australian, focus so much on American politics, but believe it or not I do have a strict personal code for the sorts of things I do and do not write about. I focus on the US because it is clearly the focal point of the transnational power establishment which uses its military and economic might to bully the rest of the world into supporting omnicidal, ecocidal plutocratic agendas, but as a strong proponent of sovereignty I do try to stay in my area and only write about things which directly or indirectly impact my part of the world. I don’t write about local US politics, I stay out of the gun control debate, and I don’t tell people in another country what their immigration policy should be. Plus an Australian criticizing any other country for cruel immigration policy would be laughable.

That said, I think I can safely say from within my sovereign boundaries that if the Democratic Party were to spend spend June through November campaigning on immigrants’ rights rather than on starting World War 3, the rest of the world will breathe a huge sigh of relief.

Trump-induced amnesia has erased much of the memory of this, but Democrats haven’t always been so goddamn terrifying. They’ve always been phony, and they’ve always been the other half of America’s oligarchic military-industrial complex problem, but before they lost their marbles in 2016 they did at least try to pretend to be vaguely progressive sometimes instead of basing their entire platform on attacking political opponents for trying to get along with Russia or North Korea. A reversion to the way things used to be, when Rachel Maddow was just a garden variety partisan hack instead of a psychotic amalgamation of all the worst aspects of Glenn Beck, Alex Jones and Joseph McCarthy, would be a welcome relief.

"This would be the same Donald Trump whose administration just facilitated the bombing of Yemen’s new cholera treatment center."#NorthKorea #SIngaporeSummit #DPRK #McResistancehttps://t.co/B1ExR75f0r

[dropcap]I[/dropcap]mmigration has been an on-again, off-again pet issue of the so-called “Resistance” since Trump took office, but only enough to score a few political points with a cutesy sound byte here and there. Never before has immigration policy reform been so aggressively and urgently shoved through with one voice as it was these last few days, in a way that couldn’t possibly be ignored. It was the most galvanized the Democrats have been since 2016, and this, unlike the moronic strategy of fanning the flames of Russia hysteria and warmongering, is something that could actually energize the Democrats’ progressive base. Getting Trump to cave to pressure and sign an executive order is arguably the very first useful thing the “Resistance” has ever accomplished. More advocacy for the human rights of immigrants and less for nuclear war flirtation could help dig the donkey party out of the hole it’s in.

Obviously this wouldn’t even begin to address the massive, glaring problems that are plaguing the Democratic Party, who just overwhelmingly voted in favor of increased military spending while denying Americans the same basic social services that are accorded to everyone else in every other major country in the world. But hell, if you have a kid who’s constantly beating up his sister and tormenting the dog, you want to give him a cuddle and some positive reinforcement when he does something nice for once. Encouraging the Dems to go back to their pre-Trump levels of immorality and focus on things that human beings can get behind would benefit everyone, and giving them credit where credit is due when they accomplish something decent is probably a good idea. Whatever lures these lunatics away from the war drums and places emphasis on human rights over military violence, I support.

Internet censorship is getting pretty bad, so best way to keep seeing the stuff I publish is to get on the mailing list for my website, so you’ll get an email notification for everything I publish. My articles and podcasts are entirely reader and listener-funded, so if you enjoyed this piece please consider sharing it around, liking me on Facebook, following my antics on Twitter, checking out my podcast, throwing some money into my hat on Patreon or Paypal, or buying my book Woke: A Field Guide for Utopia Preppers.

How the New York Times Lies About Lies: Obama v. Trump as Example

India proves [Western style] democracy is no longer fit for its purpose, while China’s model shows the way