HELP ENLIGHTEN YOUR FELLOWS. BE SURE TO PASS THIS ON. SURVIVAL DEPENDS ON IT.
By Patrice Greanville 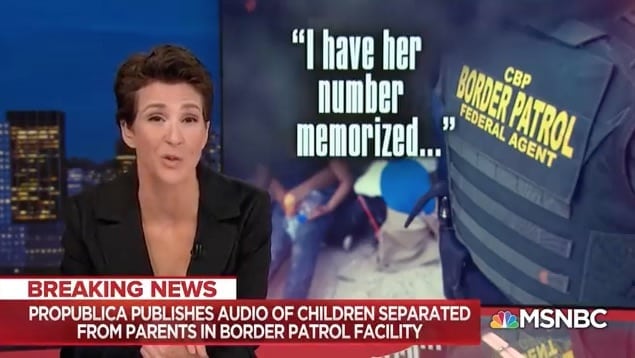 This is Rachel Maddow upon getting the breaking news that Trump has established detention centers for babies who've been forcefully taken from their parents.

While her clueless legion of liberaloid followers applaud and share her grief and indignation (real or not, who's to tell), Rachel Maddow, MSNBC's resident leading russophobe and general warmonger suddenly discovers the "horror, the horror" of Latin American internment camps for children set up by the US government.

This is the same woman who has said precious little about the US criminal interventions in the Middle East, and lately Gaza. Maddow is well known for being an unabashed imperial cheerleader.

Since Trump came to power, Maddow has led the choir in seeking his toppling, using, as do all Democrats, the spurious Russiagate scandal as the battering ram. Maddow is obviously capable of shedding tears for Latin babies caught in the insane anti-migrant policies of the US government (which Trump has exacerbated but not created, Obama deported a huge number on his watch) but pays little regard to children in Gaza, or Libya or Syria, where US criminal interventions rage on with no sign of letup.  Not to mention that a nuclear war between the superpowers would cause a helluva lot more suffering than she's already supposedly decrying (because it conveniently serves as ammo against the oafish Trump), but none of those considerations enter the picture when the main purpose is to advance the Deep State's agenda and the fortunes of the American War Party, the disgusting Democrats. (No comment is necessary about the vileness of the Republicans, as that is well established and these guys are not good at deceit and concealment, as are the Dems.)

But the real problem with Maddow and other highly-paid poseurs is not just that she's tearing up over the fate of children and babies trapped in heartless policies, which, if sincere, is legitimate. The problem—and sin—is that Maddow and her ilk are wasting an excellent teaching moment by NOT telling the US audience the real reasons we have this constant avalanche of refugees from the South pressing on our borders. Could it have something to do with century-old US foreign policy in the region?

See this excellent piece for a quick refresher of what this is all about. You won't hear it from Maddow.

See below as Obama, darling of liberals, defends "Israel's right to defend itself", which is like saying a violent burglar in my home has the right to defend himself. Such is the so-called morality of our utterly prostituted leaders. Which continues under the ferociously Zionist oaf Trump.

In any case, here's Maddow justifying and whitewashing US policy in the ME, while burning incense to the office of the US president, and Obama, in particular. The whole clip makes it sound like there's a conflict between the Israelis and the Palestinians, and the two parties are equal in military strength, which is glaringly absurd, not to mention the origins of this ridiculously long crisis which is easily traceable to Israel's expropriation of Palestinians land at gunpoint in 1948.  By any fair account, Israel is the belligerent party to this horrid mess.

Rachel Maddow on her show at MSNBC Nov. 19 makes a big to do about Obama visiting Burma and Thailand and his defense of Israel . Obama sent Hillary Clinton to broker a truce between Gaza and Israel. He says Israel has the right to defend itself against rockets being launched in Gaza . The author at Gord's Poetry Factory believes Obama is ignoring the fact that Gaza is under an illegal and immoral siege and that it too has a right to defend itself and in the case of armed conflict it didn't just begin on Nov. 10 but goes back over many decades.
About the Author
P. Greanville is The Greanville Post's editor in chief.

For Our Rulers, Smearing A Dissident Journalist Is As Good As Killing Him

It reminds me of the scene from the movie “Used Cars:

Rabid Rachel is quite simply the most repugnant figure on the new neo-Stalinist left and like so many of her other neocon mouthpieces are hellbent on instigating the type of violence that is typically seen in one of those foreign “color revolutions” that the neocons have made their stock in trade.

If anyone on the “left” still believes in cynical connivers like Maddow, Michael Moore and their ilk then they are too far gone to save.

Agree. But I would stress the fact that Maddow represents the faux left, the mainstream liberals, the imperialists bent on carrying out the US anglozionist Neocon supremacist script. These people are “left” only because on some social issues, on which they are extremely self-righteous and loud, they take positions that are at loggerheads with traditional conservatives. The real independent left was exterminated by corporate power (with the help of mainstream liberals like Maddow) decades ago. A few survive, and this publication represents their viewpoint and ideological position. If you agree, then you are more with the real left than anything… Read more »